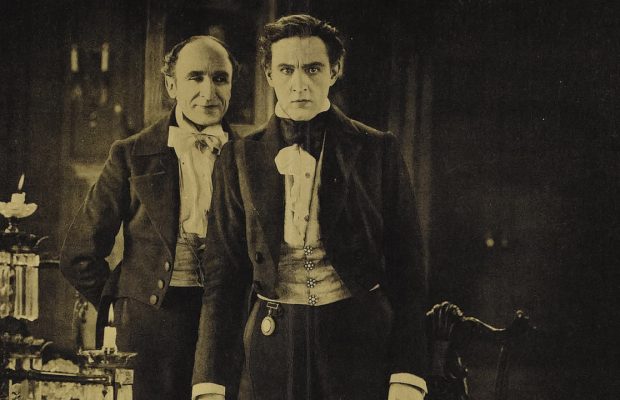 1st Season – 3rd Program
at the

A whimsical sketch of a photographer in a small community whose liveliehood comes from understanding and flattering people’s vanities.  This picture presents a humorous rapport of a day’s work carried out by a portrait photographer in his staid, old-fashioned studio.

The myopic Mister Magoo goes to theatre but wanders backstage and becomes involved with the performance.  He is a sore trial to the actors, but needless to say, the old boy stays good humoured through all the mishaps.  There are many delightful touches in the inventive UPA style in this recent episode in Magoo’s career.

A third film in the series in which Warners present highly condensed versions of some of the studio’s early successes.  This picture contains extracts from Don Juan (1926) with John Barrymore, Mary Astor, Warner Oland and Myrna Loy.  Although the tone of the commentary seems at times rather more overtly facetious than in earlier films of the series, the short is entertaining and ingeniously put together.

Chaplin made a new comedy every week (for Sennett).  His correct name mentioned for the first time by the “Moving Picture World” in its notice of Caught in a Cabaret (April 27, 1914) which was announced as the first of a new series.  The “Dramatic Mirror,” that same month, acclaimed him as “second to none.”  They (the Keystone Films) do not compare with Chaplin’s later and more polished works, but they have spontaneous charm and are interesting for the first appearance of the characteristic Chaplin traits.  For example, in Caught in a Cabaret (where he impersonates a duke) he flirts with Mabel at a garden party and early exposes himself when he crosses his legs, revealing a hole in his shoe.  He saves the situation by hanging his hat on the toe.”

From Charlie Chaplin by Theodore Huff 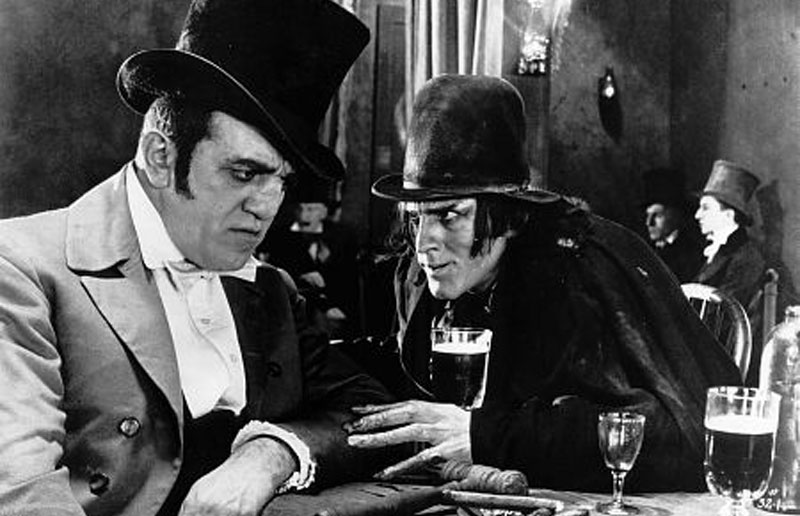 This is the first veersion of Stevenson’s famous man-into-monster story, notable for Barrymore’s performance which “terrified his fans.”  It also introduced a beautiful show girl named Nita Naldi.  Although, the MMA describes this as the “first” version of Stevenson’s story, Daniel Blum’s Pictorial History of the Silent Screen records a Universal production of 1913 with King Baggot and Jane Gail.  Also in 1920, in Germany, Conrad Veidt’s “slender silhouette” appeared terrifyingly and effectively in Der Januskopf, made to rival Barrymore’s film, and shown in North America as Love’s Mockery.  Fredric March starred in Rouben Mamoulian’s version of 1932, for which he won an Academy Award, and Spencer Tracy and Ingrid Bergman appeared in Victor Fleming’s production in 1951 for MGM.

The 1920 version brought to prominence the director, John Stuart Robertson, who came to the movies in 1915.  His films are marked by the “sensitivity and sincerity of his quiet, cultured temperament.”  Having been trained in the academic tradition of the theatre he was able to “make a picture smoothly and intelligently, to distinguish it with colour, atmosphere and characterization” (Lewis Jacobs) as in the drama of Dr. Jekyll and Mr. Hyde.  Among his many following pictures was Mary Pickford’s Tess of the Storm Country.

John Barrymore had a mischievous as well as mystical sense of humour.  Gene Fowler relates that in 1927 Barrymore began looking for a new house in Beverly Hills.  His agent suggested that property owners would raise the price when it became known that the great actor was house hunting.  “We’ll fix that” the actor said, and opening a chest he donned “a face of horrible contours, with fangs protruding from his lips and talon-like nails curling from his fingers.”  He was wearing part of the make-up for Dr. Jekyll and Mr. Hyde.  Putting on a wig and battered hat he remarked, “I don’t think the real estate harpies will mistake Mr. Hyde for a man of means.”