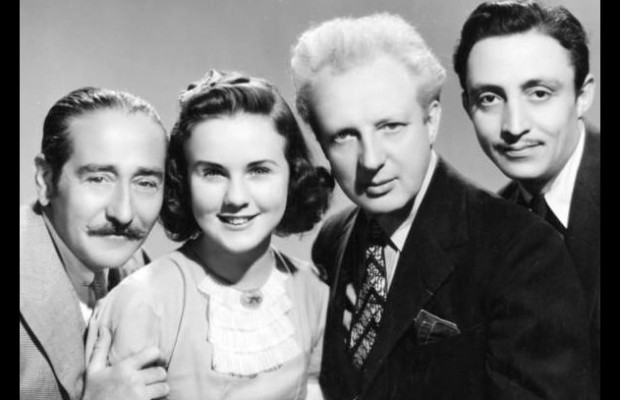 Toronto Film Society presented 100 Men and a Girl (1937) on Monday, December 4, 1978 in a double bill with The Glenn Miller Story and the short Hollywood Rhythm as part of the Season 31 Monday Evening Film Buff Series, Programme 4.

100 Men and a Girl is the fourth feature film of Deanna Durbin that Toronto Film Society has shown in the past three years (First Love exhibited on March 30, 1976; Three Smart Girls and His Butler’s Sister on November 29, 1976).  The overwhelmingly enthusiastic audience response for each film esnures several more Durbin films will be screened in forthcoming seasons.

What makes tonight’s show particularly memorable is the fortunate fact that Deanna Durbin was born on this day, in 1921 (December 4th).  Happy Birthday, Deanna!

Since the programme notes for the previous Durbin evenings contained reasonably thorough biographies (particularly, the nots for the Durbin programme on November 29, 1976, which excerpted several pages from William K. Everson’s excellent career article on Deanna Durbin, originally published in Films in Review, November 1976), we will dispense with the usual career summary.  Suffie to say that Deanna Durbin was born in Winnipeg, Canada, on December 4, 1921, started filming in 1936, retired ompletely in 1948, and moved to France in 1950, where she presently lives with her husband, Charles David, at Neauphle le Chateau, not far from Paris.

Of tonight’s film, Frank S. Nugent writes in the New York Times (Sept. 18/1937): “Aside from its value as entertainment, which is considerable, Universal’s 100 Men and a Girl reveals the cinema at its sunny-sided best.  Here in Manhattan, as you probably have noticed, we have been watching pickets from the musicians’ unions marching up and down in front of theatres protesting their use of ‘canned music’.  Apparently not at all annoyed (sympathetic in fact), Hollywood, in the new film at the Roxy, sheds a commiserative tear over the plight of those same unemployed artists and suggests a solution: get together as a symphony orchestra, find a sponsor and wangle Leopold Stokowski into serving as guest conductor.  Selah!

“Selah, indeed, in 100 Men and a Girl, but only because the unemployed music-makers–Adolphe Menjoyu, Mischa Auer among them–had the good fortune to have Deanna Durbin as their organizer, agent, manager and promoter.  Being a joyous sprite, with an astonishingly mature soprano, an exuberant nature and an abiding faith in mankind, even in womankind, Miss Durbin makes the impossible seem only moderately improbable.  …That climactic scene, by the way, is as thrilling a bit of business as State’s last-second touchdown, the hero’s arrival at the Bloody Gulch saloon or the way the Bengal Lancers stormed the heights at Balaklava. …

“It is a splendid climax to a film which already had covered itself and its makers with distinction. The symphonic interludes in themselves are worthy of delighted attention.  …The music is an integral part of the film, as important to the narrative as Mr. Menjou’s anguish at being Miss Durbin’s jobless father, as Mr. Auer’s antic grimacing, as Miss Brady’s fluttering society matron, as Eugene Pallette’s comic involvement in an art project far beyond his ken. Through it all, over the highs and lows of symphony and comedy, Miss Durbin weaves her refreshing course; not a great singer and certainly not a great actress, but a wholesome and spring-like personality, one of the nicest the screen has given us in a long time. . . . And now we wonder: will the musicians’ union picket Mr. Stokowski?”

The following contemporary review, by Cecelia AGer, republished in Garbo and the Night Watchmen, edited by Alistair Cooke, is of Deanna’s first feature, Three Smart Girls, but its comments strike the heart of Durbin’s popularity in all her early films: “Pure youth rarely gets on the screen.  The chances of its coming to the studio at all are few–since pure youth is not itself concerned with making a profession of its youthfulness–but still it is possible for it to arrive at the studio in its natural state, whereupon the usual treatment it meets is a good lousing up.  In the processes of making a picture, it’s doomed to adulteration.

“Too much make-up, elaborate coiffures, fancy clothes, unsuitable scripts, insensitive direction–even glamour.  Either Hollywood doesn’t understand children, or just doesn’t like them for themselves alone.  Extraordinarily precocious things are thought up for Shirley Temple to do, and her mass of curls is relentlessly cultivated.  Bobby Breen is terribly emotional for a boy of his age, and his deep marcel waves are burnished to a blinding shine.  Therefore the sympathetic and simple handling awarded Deanna Durbin in Three Smart Girls is all the more remarkable and the picture’s good taste virtually sensational.

“No attempt is to make Miss Durbin look or act like Joan Crawford, nor read her lines like Myrna Loy.  She is asked only to behave like what she is–a nice girl of fourteen.  Realizing that she can’t sing all the time, and seeking something with which to fill in the gaps, her picture’s producers have hit upon the daring scheme of letting her natural bloom of youth suffice.

“And so Miss Durbin’s eyelashes are of a normal length and her lip-rouge unobtrusive.  She is given opportunity to be sweet and spirited; she is guarded from being cute.  Her clothes are simple and suitable for her age; they have none of the strident salesmanship of a wardrobe selected by a stage mother.”

Yet, for the most apt summary of Deanna Durbin, we would have to requote Bill Everson: “Deanna’s films (and especially her earlier ones) invariably climaxed with a radiant song from the star, often with a perky pixie hat atop her tresses, followed by a full-screen closeup of a beaming smile of happiness.  That image may never come back, in contemporary  movie-making and the screen is all the poorer for it, but as long as Deanna Durbin’s films exist they’ll have the magic to generate that happiness to anyone fortunate enough to see them.”

Note:  There is the unfortunate probability that tonight’s print of 100 Men and a Girl will not be in very good condition.  There are several splice cuts in the opening orchestral number by the late Leopold Stokowski (1882-1978).  But the remainder of the film is relatively free from further degradation.