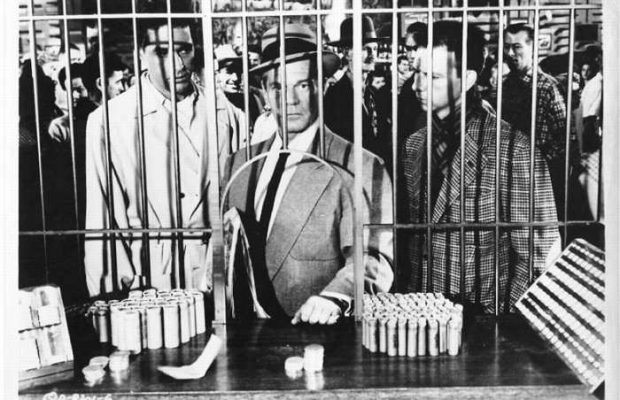 Toronto Film Society presented 5 Against the House (1955) on Monday, August 15, 2016 in a double bill with The Hot Rock as part of the Season 69 Summer Series, Programme 5.

Director Phil Karlstein anglicized his last name to Karlson when he directed his third film The Shanghai Cobra in 1945.  Prior to that he acted as an assistant director on 37 films until finally given his first chance to direct in 1944.  By the time he made 5 AGAINST THE HOUSE, he already had an impressive number of films under his belt.  Some of the films he made in the 1950s were in the genre of tonight’s, such as Scandal Sheet, Kansas City Confidential, 99 River Street, Tight Spot, the semi-documentary styled The Phenix City Story and The Brothers Rico.  Action-packed and crime-ridden.

This was Kim Novak’s fifth film, with her first and fourth films being uncredited bit parts.  Here for the first time, she received top and equal billing alongside Guy Madison.  It was the following film, Picnic, made the same year, that brought her fame and critical success.  Her best-known work was made in the next 10 years.

In Joel Foreman’s book The Other Fifties: Interrogating Midcentury American Icons, he wrote about Novak’s performance in 5 AGAINST THE HOUSE.  Novak’s first two roles for Columbia studios established her reputation as a Marilyn Monroe clone, the sensual power of her screen presence was expressed in a relatively uncomplicated if already self-conscious sexuality.  And with this film being the one made before her burst into stardom with Picnic, he wrote that Canadian critic Richard Lippe argued that her character in tonight’s film “didn’t significantly develop her image.”  Foreman felt that Lippe’s dismissal indicates an insensitivity to the difficulty of this conventional part, a difficulty Novak teased out in her performance.  Her role as a nightclub singer in a college town and love interest to Guy Madison’s character, ends up becoming central to the plot’s resolution, but neither the plot nor its resolution was significant in the construction of the Kim Novak star image.  This being a 50s film, Novak has to balance her sexual attractiveness with being taken seriously as a woman who is also searching for love, marriage, financial security and a family.

So let’s see how she does.

A film from the mid-50s makes it quite clear that antics of college students had progressed quite a bit from the days when the swallowing of goldfish was the main prank attributed to the crowd.  The premise is an interesting one: a group of thrill-seeking college students cooks up a plan to rob one of the high-rolling Reno gambling establishments, known as Harold’s Club.  All is going well until one of the group, an ex-GI ‘brick’ (Brian Keith) falls prey to his psycho tendencies, left over from the war, and the fun game suddenly becomes a deadly realistic game.

The others in the group are of varying backgrounds; Guy Madison, as the level-headed one in the group, brings an interesting counter-balance to Keith.  Alvy Moore is along to add some comedy, and Kerwin Matthews is the master-mind who concocted the cool, scientific scheme to knock off what is regarded as an impregnable gambling palace.  Along with Madison, Kim Novak, complete in shimmering, clinging dresses as the saloon singer who is drawn into the fray, are the box office ‘names’ that were designed to bring out the movie-going masses.  Those who came, and the film did well, found not only their favorite stars, but also a taut, well thought-out drama with the screenplay by Stirling Silliphant, who was also a co-producer.

The New York Times notes: ‘credit Brian Keith with a superior portrayal as the rugged but sick ex-GI whose ailing mind turns this calculated escapade into a grim clash with the law.  Guy Madison does an excellent stint as his level headed buddy, who is devoted to his friend, but struggles with his side-kicks against being inveigled, together with his fiancée into this appalling and untenable situation.”

In The Motion Picture Guide, the reviewers put it even mire succinctly: “All in the cast are merely props to Keith’s mentally-askew character.  A performance that is worth the whole film.  Karlson’s direction is top-drawer, in keeping with his superb film noir reputation.  Silliphant’s script is taut and literate as well as accurate in portraying the follies of youth.”

Brian Keith was born in 1921 in New Jersey, made his first film appearance at the age of three, then appeared in stock and radio.  During WWII, he was a machine gunner in the marines, and didn’t make his adult film debut until 1953.  He was much at home in westerns, and gradually switched from heavy character parts to sympathetic, increasingly more important and versatile roles.  He was often chosen for Disney films and was popular in television series including The Westerner and Family Affair.  He tragically committed suicide this past summer (June 24, 1997) while suffering from a terminal illness.

Stirling Silliphant was a screenwriter and producer born in Detroit in 1918.  He was an advertising and promotion executive with Disney and Fox, producing a couple of films early in the 50s, then turned screenwriter.  He worked both on feature films and such successful TV series as Naked City and Route 66.  He won an Academy Award in 1967 for the screenplay of In the Heat of the Night.