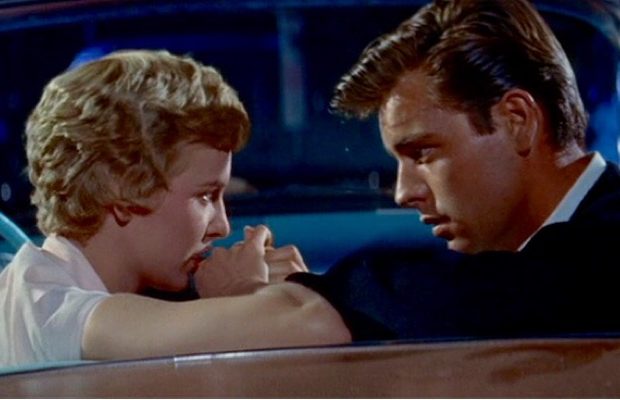 Toronto Film Society presented A Kiss Before Dying (1956) on Monday, November 25, 1985 in a double bill with Four Hours to Kill as part of the Season 38 Monday Evening Film Buffs Series “B”, Programme 4.

A Kiss Before Dying–a chilling, ironic thriller about a psychopathic college boy who murders the women who stand in his way–is based on a novel by Ira Levin, better known as the author of Rosemary’s Baby.  Reviewers had had nothing but praise for the book, which one of them described as “a clever psychological thriller, ingeniously plotted and coldly penetrating in its analysis of the young murderer.”  The film was equally well-received, with Robert Wagner and Joanne Woodward drawing special praise for their performances.

A Kiss Before Dying catches Robert Wagner at a transition point in his career, maturing from an awkward juvenile lead and a bobby-sox idol into a smooth, assured leading man.  The role of the psychopath was a considerable departure from anything he had done previously but he managed to bring to it “the right amount of sullen charm”.  (MFB, June ’56)  His actual co-star was Virginia Leith but it was generally agreed that her performance was far surpassed by that of Joanne Woodward as the psychopath’s first victim.  It was only Woodward’s second screen appearance, a year after her film debut in Count Three and Pray (1955).  For her third film–The Three Faces of Eve (1957)–she would win an Academy Award, before going on to marry Paul Newman and be directed by him in Rachel, Rachel (1968) and The Effect of Gamma Rays on Man-in-the-Moon Marigolds (1972).  The film was further enhanced by one of Mary Astor’s rare screen appearances of the 50’s–her first, in fact, since Any Number Can Play (1949).

Gerd Oswald, the film’s director, was born in 1916 in Germany, the son of a famous producer director.  He worked as a child actor and production assistant before fleeing Germany with his family in 1938.  He made 14 films between 1956 and 1970, of which the best known are A Kiss Before Dying and Crime and Passion (1957), starring Barbara Stanwyck and Sterling Hayden.  Disappointed with the quality of the film projects assigned him, he turned to T.V., directing episodes of “Perry Mason”, “Bonanza” and “Star Trek”.  Andrew Sarris had a special admiration for Oswald’s work, writing in his book The American Cinema:

Gerd Oswald has shown an admirable consistency, both stylistically and thematically, for a director in his obscure position.  A fluency of camera movement is controlled by sliding turns and harsh stops befitting a cinema of bitter ambiguity.  Oswald’s success in imposing a personal style…on shooting schedules ranging from five to seven days should serve as an object lesson to young directors who complain that they lack the time to get their films just right.

Oswald’ efforts were doubtless aided in A Kiss Before Dying by the services of a first-rate cinematographer, Lucien Ballard.  Ballard had begun his career as a cameraman for Von Sternberg on such films as Morocco, The Devil Is A Woman, and Crime and Punishment.  Later, he was to be famous for his work on the wide, colour screen in such films as The Wild Bunch and True Grit.  A Kiss Before Dying illustrates the start of his second phase in his career.