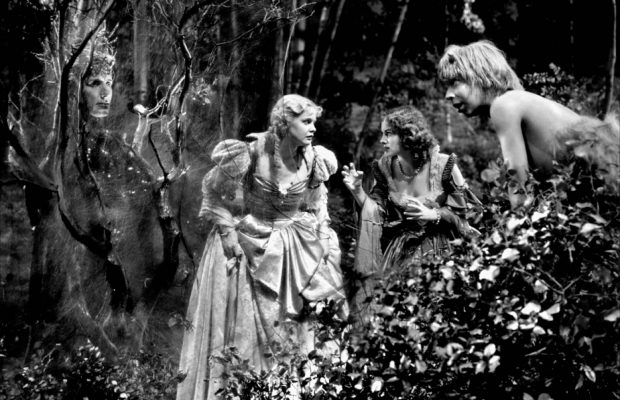 Toronto Film Society presented A Midsummer Night’s Dream (1935) on Sunday, March 19, 1989 in a double bill with Roman Scandals as part of the Season 41 Sunday Afternoon Film Buffs Series “A”, Programme 6.

Hollywood pursues the shapes and shadows of the unfettered imagination with courage, skill and heavy artillery in Max Reinhardt’s film version of A Midsummer Night’s Dream.  Many of the elusive, dancing conceits of Shakespeare’s lyric fantasy remain at large, though, and seem to hover about the screen hotting derisively at the cinema’s determined bloodhounds.  But Mr. Reinhardt has isolated some of the winged fancies and the photoplay caparisons them in rich and lovely stuffs.  If this is no masterpiece, it is a brave, beautiful and interesting effort to subdue the most difficult of Shakespeare’s works, and it has magical moments when it comes all alive with what you feel when you read the play.

For the work is rich in aspiration and the sum of its faults is dwarfed against the sheer bulk of the enterprise.  It has its fun and its haunting beauty.  The play has been adapted with intelligence and affection.  Except for a laggard quality in the ballet movements, it moves with a mettlesome step.  William Dieterle, one of the most skillful directors in Hollywood, has transferred Mr. Reinhardt’s visions to the screen all complete.  Erich Wolfgang Korngold has arranged the Mendelssohn music in a magnificent score, which weaves a rhapsodic spell about the spectator and transports him to the sightless realm of Avon’s elves and fairies.

But the plain and distressing truth is that the screen, in the proud act of releasing the play from the shackles imposed on it by the proscenium arch, has the embarrassing miracle to perform of creating visual images which will catch the phantoms that lurk behind the words.  The Nijinska ballet, for example, evokes not the fairy attendants of Oberon and Titania, but pretty girls in white gauze and sturdy gentlemen with wings strapped to their shoulders.

The goblins are dwarfs in make-believe masks and the moonbeams on which the fairies dance are clever mechanical tricks in which the man-made magic is never quite submerged in the illusion it is striving to create.  If you look too eagerly at Puck as he soars into space on a stick, you will discover the wire on which he is being hoisted.

It is an illuminating fact that the photoplay achieves perfection in the clowns, those pragmatic louts who have no belief in the revels of the fairy people in the enchanted wood between dusk and dawn.  Joe E. Brown as Flute the Bellows-mender gives the best performance in the show.  It is a privilege to roar with laughter when he is rehearsing for the rude masque or playing the timid Thisbe to James Cagney’s Pyramus.  Hugh Herbert and Frank McHugh are uproarious as his fellow tradesmen.

The special achievement of the Messrs. Reinhardt and Dieterle is their ability to recite the complex fable with clarity.  In the crafstmanship of its story telling, the film is enormously skillful in executing a narrative counterpoint for the four distinct situations: Theseus’s efforts to woo his captive bride-to-be, Oberon’s campaign to win the serving boy away from Titania, the struggle of the low comedians to prepare their tragical history of Pyramus and Thisbe, and the tangled romances of Hermia, Demetrius, Helena and Lysander.  Mr. Dieterle has managed the tale admirable, projecting the speeches easily in his closeups and at the same time subtly escaping the visual monotony which is so often the price of excess in the close-up.

Mickey Rooney’s remarkable performance as Puck is one of the major delights of the work.  As the merry wanderer of the night, he is a mischievous and joyous sprite, a snub-nosed elf who laughs with shrill delight as the foolish mortals blunder through Oberon’s fairy domain.  In the other important roles the film is uneven in performance and suggests flaws in Mr. Reinhardt’s reading of the play.  As Bottom, the lack-wit weaver whom Puck maliciously endows with an ass’s head, James Cagney is too dynamic an actor to play the torpid and obstinate dullard.  While he is excellent in the scenes in the wood, in the “Pyramus and Thisbe” masque he belabors the slapstick of his part beyond endurance.

The distraught lovers are a study in scrambled woods.  While the two maidens, Jean Muir and Olivia de Havilland, immerse themselves in excesses of tearful passion, their consorts, Dick Powell and Ross Alexander, prance about in an excess of good humor and delight in informing the audience what hilarious fellows they are.  Victor Jory’s Oberon is highly impressive, but his earnest sobriety scarcely seems appropriate to the fairy king whose antic love potions cause all the trouble.  Ian Hunter makes a winning Theseus and Verree Teasdale has a queenly bearing as Hippolyta.  But Mickey Rooney and Joe E. Brown are the bright particular stars of the photoplay.  They keep it awake and hammer it into liveliness.

It is difficult to measure A Midsummer Night’s Dream critically because the infant cinema has had no time to build a Shakespearean tradition.  Whatever its flaws, it is a work of high ambitions and unflagging interest, and it proves a stimulating evening in the cinema.  It is a credit to Warner Brothers and to the motion picture industry.