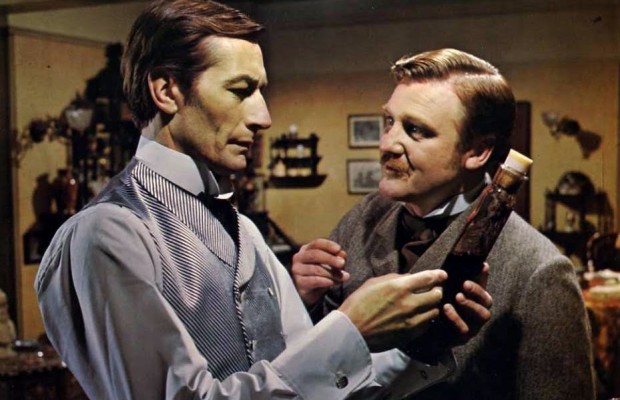 Toronto Film Society presented A Study in Terror (1966) on Monday, March 30, 2015 in a double bill with Moss Rose as part of the Season 67 Monday Evening Film Buff Series, Programme 7.

Despite hundreds of cinematic incarnations since the dawn of cinema of fiction’s most enduring detective, Sherlock Holmes, it wasn’t until 1965 that filmmakers finally pitted him against the Victorian era’s most famous real-life criminal, Jack the Ripper, in A Study in Terror.  The project was written by brothers Donald an Derek Ford, a pair of British writers best known for titillating exploitation titles like The Black Torment (1964) and The Yellow Teddy Bears (1963), and was ushered into production by Herman Cohen, a master of low-budget showmanship with credits like Horrors of the Black Museum (1959), Konga (1961) and I Was a Teenage Werewolf (1957) under his belt.  The resulting film proved to be a career highlight for most involved thanks to a top-tier cast and solid production team, executing its can’t-miss concept so well it was reused again in 1979 for the more prestigious, star-studded Murder By Decree starring Christopher Plummer as Holmes and James Mason as Watson.

The serial murder of prostitutes in London’s Whitechapel district in 1888 intrigues master sleuth Sherlock Holmes (John Neville) and his assistant Dr. Wtson (Donald Houston), particularly when they acquire a box of surgical instruments whose missing scalpel matches the modus operandi of the killings.  Their investigations lead them to an aristocratic family whose sons hide a shameful secret that could provide a motive.  As the slayings continue, Holmes uncovers a horrific tapestry of liues and crime involving adultery, disfigurement by acid and insanity.

An independent production released in America by Columbia Pictures (who mounted a bizarre ad campaign aping TV’s Batman series and issued a movie tie-in novelisation by Ellery Queen), this atmospheric mystery/terror hybrid (originally shot under the title Fog) falls in line with a string of Ripper-oriented fictions which meld procedural and horror, a tactic used earlier in films such as Baker and Berman’s Jack the Ripper (1959).  Accomplished stage and screen actor John Neville had large shoes to fill playing Holmes after the iconic series with Basil Rathbone, but he won over audiences and critics with an exceptionally strong portrayal.  According to Cohen and producer Harry E. Lester in Ron Haydock’s Deerstalker!: Holmes and Watson on the Screen, Neville was curted for over a year to play the role and had originally been approached to play the sleuth on stage in the 1964 musical Baker Street, a role eventually taken by Fritz Weaver.  During the shoot he also appeared onstage each night at the Nottingham Playhouse in Volpone, necessitating a commuter plane to shuttle him back and forth to the set.  Neville returned to the role once again in 1974 onstage in William Gillette’s hit, Sherlock Holmes, and continued a busy later career including the title role in Terry Gilliam’s The Adventures of Baron Muchausen (1988) and a recurring, well-manicured character on TV’s The X-Files.

As for the genesis of pitting Holmes against Saucy Jack, many of the participants have taken credit ranging from Repulsion (1965) producer Gene Gutowski to Cohen himself, who claimed in Alan Barnes’ Sherlock Holmes on the Screen that inspiration struck when he was “one of the first Americans to be taken through Scotland Yard’s Black Museum” where “Queen Victoria sealed some secret documents on the case of Jack the Ripper…it all points to a member of the Royal Family.”  The idea of tying the Ripper’s antics to the British aristocracy soon became a familiar trope in future tellings all the way from the aforementioned Murder By Decreeto Alan Moore’s graphic novel From Hell and its film adaptation with Johnny Depp, while writer/director Nicholas Meyer used the same gimmick as a more unexpected jumping-off point by pitting Holmes and Jack the Ripper against Sigmund Freud and H.G. Wells, in The Seven-Per-Cent Solution (1976) and Time After Time (1979) respectively.

Much of the pleasure in watching A Study in Terror can be derived from its once-in-a-lifetime supporting cast of sterling English performers at various points of their careers.  Most notably, future Academy Award winner Judy Dench was suggested by Neville for the role of the angelic Sally Young, immediately following up on her first lead role in the then-unreleased Four in the Morning.  The always wonderful Robert Morley delivers one of the rare cinematic portrayals of Holmes’ brilliant brother, Mycroft.  Future Eastenders and Carry On mainstay Barbara Windsor appears as the ill-fated Annie Chapman, while busy character actors Frank Finlay and Antohony Quayle reteamed in Murder By Decree with the latter reprising his role as Holmes verbal sparring partner, Inspector Lestrade.  Other familiar faces include Hammer Films actress Adrienne Corri, Barry Jones, Cecil Parker, Charles Regnier, and John Fraser.  No less noteworthy is the crew on the other side of the camera including cinematographer Desmond Dickinson; director James Hill (who scored his biggest hit the next year with Born Free), and the very first composing assignment for John Scott, who started as a musician with the Beatles, Henry mancini and John Barry and went on to score more than eighty films including The Final Countdown (1980) and Greystoke (1984).

Despite generally positive reviews and its status as the first “adult” treatment of Sherlock Holmes, A Study in Terrorre up much box office business at the time, facing competition from a raft of Hammer horrors and other European imports with a stronger emphasis on sex and violence.  However, it quickly found favor among Holmes devotees and mystery lovers, earning a respectable cult following and setting a template still being followed today.  Quite a few fans would also argue it still hasn’t been topped.