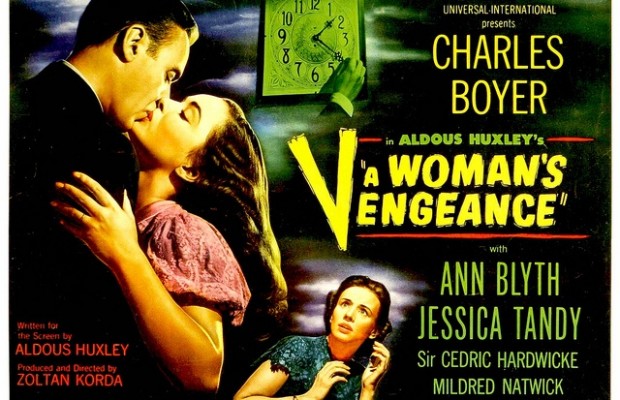 Toronto Film Society presented A Woman’s Vengeance (1948) on Monday, August 28, 2017 in a double bill with Strange Impersonation as part of the Season 70 Summer Series, Programme 7.

Charles Boyer usually lunched alone at Ernest’s, a favorite French restaurant.  He had a private table, obscured from general view, and only rarely lunched with someone else.  On one such occasion the someone was Aldous Huxley, and it was another case of a famous author pleading Boyer into a film against the actor’s own instincts.  But at least he did not dislike the Huxley story.

It was The Gioconda Smile, which Huxley had written both as a short story and play early in his career—the grim tale of a man who’s accused of being a wife-murderer.  Boyer accepted it after squirming through the first screening of his latest picture, Arch of Triumph—at 224 minutes of running time, it was longer than Gone With the Wind by three minutes.  Certain that it couldn’t be saved, Boyer reasoned that The Gioconda Smile couldn’t be as bad and might be quite good with Zoltan Korda directing; and he wanted to have another picture ready to follow Arch of Triumph and improve upon it.  His acceptance of the bid brought the project into being for Universal Pictures.  Aldous Huxley did his own screen adaptation, with the title changed to Mortal Coils, the name of the story volume in which The Gioconda Smile had been collected.

Made with routine efficiency in the summer of 1947, the picture shot as Mortal Coils was again retitled, this time pulpishly, as A Woman’s Vengeance.  So labeled, it went into its first-run engagements late in the year.

As Universal’s Christmas release, A Woman’s Vengeance obtained decent enough reviews. There was perfunctory high praise for Boyer’s first solo starring role since Algiers, and for Jessica Tandy as well.  Unfortunately, though, the Universal promotion effort failed to capitalize on Miss Tandy’s having just opened on Broadway as Blanche du Bois in Tennessee William’s tantalizing A Streetcar Named Desire, opposite the sensational young Marlon Brando.  That might have given the box office a little nudge, although a big nudge was needed.  A Woman’s Vengeance just died.  Well made it may have been, but it wasn’t a picture for people to like.  It came in a time of industrial panic, amid stunning evidence of a diminishing national movie audience even before television was a competitive influence.  Still, I’m sure for us here tonight, we will have a different perspective.

Sourced from The Reluctant Lover: Charles Boyer by Larry Swindell (1983)

Introduction by Caren Feldman for the Season 70, August 28, 2017 screening

“A rather literary movie, but most movies aren’t even that; much less are they real movies.  Sensitively directed by Zoltan Korda and generally well played, above all by Jessica Tandy.”

Agee’s qualified praise is as favourable as one could find of this generally under-rated and overlooked film.  At least he singled out the performance of Jessica Tandy which is the crowning glory of a most distinguished cast and of her own, generally unrewarding, screen career.  When complimented on her smouldering, dangerous, yet decidedly human creation of Janet Spence, Miss Tandy in later years took slightly embarrassed refuge behind the screenplay’s illustrious authorship.  “Well, look who wrote it.  I couldn’t go wrong,” she said (backstage at Stratford).  Of course, she could still have gone wrong but she decidedly didn’t.

Bosley Crowther in the “New York Times” undersold the film, more thoroughly–and this is not untypical of them both–than James Agee.  His comments have, therefore, been edited for maximum impact!

“Allowing there’s basis for the saying that hell hath no fury like a woman scorned and that Jessica Tandy is an actress who is thoroughly able to prove the point, there is still something insufficient about the dramatization of this saw produced by Zoltan Korda as A Woman’s Vengeance and presented at the Winter Garden yesterday.  The lack is not in the performance, which is expertly accomplished, by and large, particularly by Miss Tandy and Sir Cedric Hardwicke in what turns out to be the critical roles.  Nor is it in Mr. Korda’s direction, which is visually forceful and austere.  Rather it’s in the story which Aldous Huxley has commercially prepared from his own little treatise on vengeance, “The Gioconda Smile.” …

This final long scene of revelation—a sort of drawing-room third-degree—is tightly and trenchantly acted, with Miss Tandy giving a brilliant show of vicious determination and Sir Cedric matching hers with resolute force. And the playing of both in this sequence (which could easily be an act in a play) is properly cumulative of all their incisive talents revealed before. …