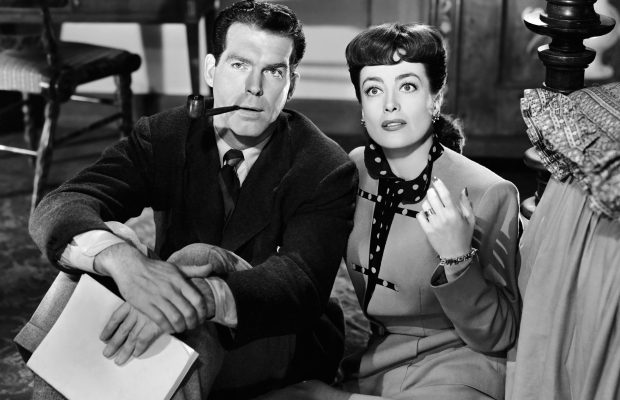 Toronto Film Society presented Above Suspicion (1943) on Sunday, January 15, 2017 in a double bill with The Spider Woman as part of the Season 69 Sunday Afternoon Film Buff Series, Programme 4.

I recently watched this film and the chemistry between Joan Crawford and Fred MacMurray works exceptionally well.  Joan was sweet and soft and Fred made a perfectly charming husband.

And if you didn’t get enough of Basil Rathbone in tonight’s first feature, you get to see him again, this time playing Count Sig von Auschenhausen.  And to round off a talented cast, it’s always a pleasure to watch Conrad Veidt at his craft.

In the book Conversations with Joan Crawford, interviewer Roy Newquist asked her about tonight’s film.  Joan’s thoughts on it were this: “And goodbye to Metro after—how many?—eighteen years.  No prize this one, but I must say that both Fred MacMurray and I tried to make the spy nonsense plausible.  I really wasn’t suited to the wartime melodramas they were turning out, and if a script was bad I was worse.  Notice, now, I’m down to one film per year?  Pretty soon it becomes less than that.

In Jane Ellen Wayne’s book Crawford’s Men, she quoted Joan as saying that Fred “had one of the few happy well-adjusted marriages in Hollywood.  His wife did not approve of swearing, but (despite that—my words) their parties were divine.  I remember Carole Lombard, who used very colourful language, was so frustrated one night she jumped into the swimming pool wearing an expensive white chiffon dress.  For the rest of the evening she wore Fred’s pajamas, but she didn’t utter a blue word.”

The critics had a few things to say—some good, some bad—about Joan and Fred.  Howard Barnes in the New York Herald Tribune had this to say: “There are so many spies in Above Suspicion that it is hard to keep track of them.  There are so many floral, musical and cryptographical passwords in the film’s plot that the whole show becomes a sort of super treasure hunt….  Unfortunately, neither Joan Crawford nor Fred MacMurray look quite bright enough to unravel the tangled skeins of this screen melodrama.”

But on a positive note, T.S. in the New York Times wrote that, “Joan Crawford, after a couple of pretentious roles, is a very convincing heroine,” and Variety said that “both MacMurray and Miss Crawford competently handled their roles, despite drawbacks of the script material.”

Regardless, this film is serious and delightful, offering heroism and entertainment to a country whose people were involved for the past two years in this very war.

Joan Crawford was teamed with Fred MacMurray for the only time in Above Suspicion. They make a surprisingly compatible team on screen as Frances and Richard Myles, two newlywed Americans who are about to depart on their honeymoon when they are approached by a mysterious representative of the British Secret Service. They are asked to undertake a secret mission within Nazi Germany for the precise reason that, as two innocent tourists, they are “above suspicion”.

Despite the cries of it being wartime propaganda, Above Suspicion gave home audiences a sample of what was happening in Europe at the time, however unreal the setting here. Certainly, the idea of conscripting civilians for such a dangerous mission as this is an absurd one, but in the light of the terrors of war, the film does convey a message of what ordinary people were actually doing under the very noses of the Nazis in the occupied areas.

Joan Crawford delivers a surprisingly restrained performance as a young bride caught up in the adventure of “being spies”, to use her character’s words. (This proved to be her final film of her 18-year stay at MGM.) She and MacMurray are quite believable, and they handle the numerous twists and turns in the convoluted story very well. One year off his career-changing triumph in the classic Double Indemnity, Fred MacMurray–who was popular at this time for his jovial comedy performances opposite top actresses like Claudette Colbert and Carole Lombard–proves himself adept in the drama department, as well.

Above Suspicion boasts a superb supporting cast, including Basil Rathbone, as a sneering Nazi aristocrat who imprisons and tortures Crawford (while never cracking her impeccable MGM gloss); and Conrad Veidt, in his final performance, as an Austrian resistance fighter. (Veidt died, at age 50, of a heart attack shortly after the film was completed.) Some felt that with such scripts as Above Suspicion, studio head L.B. Mayer was forcing Crawford to walk out on her contract. Crawford, however, had the last laugh; within two years, she would re-emerge triumphantly as a revitalized Warner Bros. star and Best Actress Oscar winner for Mildred Pierce (1945).

The famous Red Rose Hat (seen above) worn by Joan in many scenes still exists, and fetched a record price when sold on eBay a few years back.