Toronto Film Society presented Adam’s Rib (1949) on Monday, December 19, 1983 in a double bill with The Thin Man as part of the Season 36 Monday Evening  Film Buffs Series “B”, Programme 4. 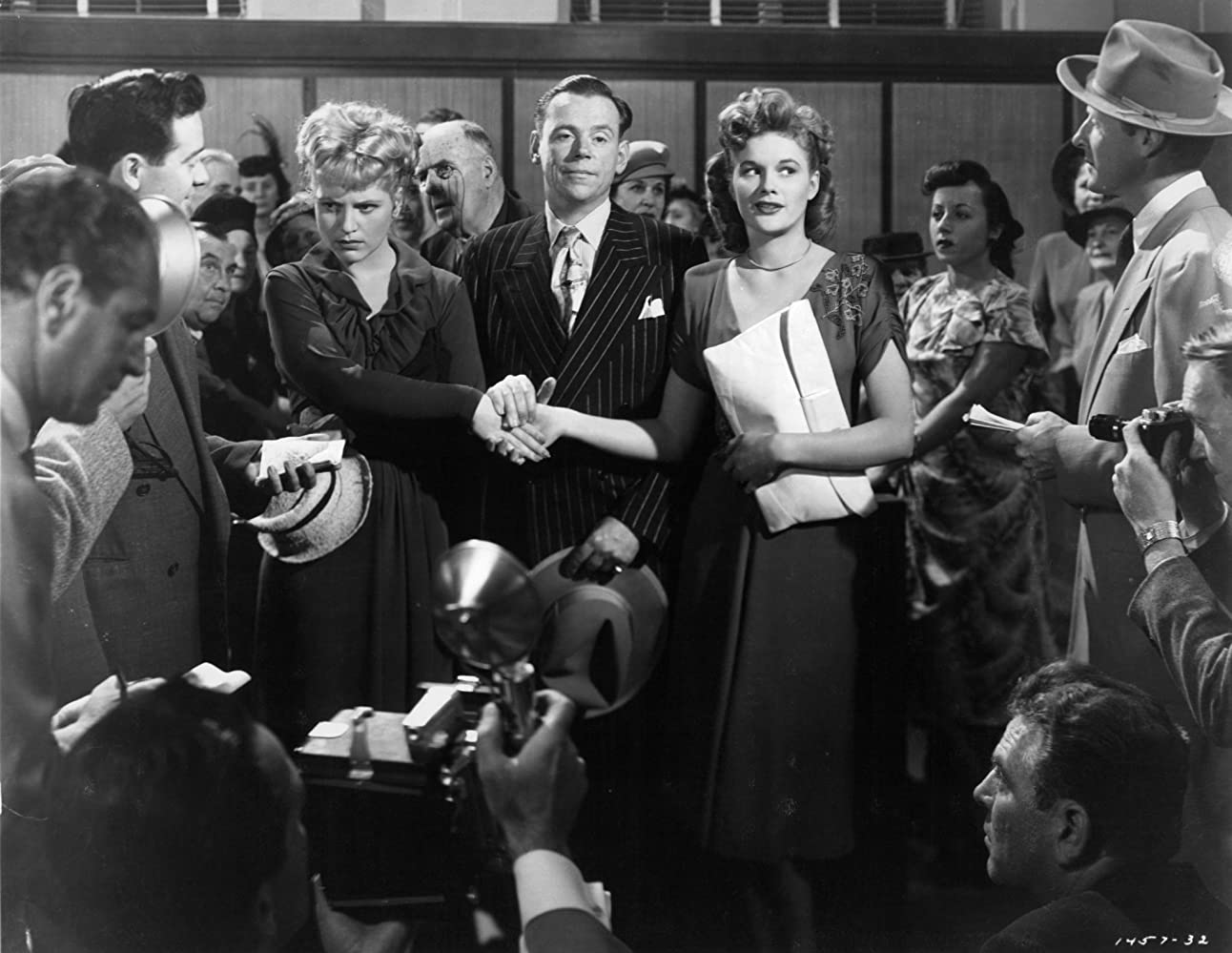 Amanda Bonner, a lawyer with a fierce belief in women’s rights, defends Doris Attinger, a dumb blonde who has shot her two-timing spouse.  Amanda’s husband, Adam, a sharp assistant district attorney, has been assigned prosecutor in the case.  Eventually the trials and tribulations of the trial, along with the nagging question of female equality, fill the air and envelop Adam and Amanda–not only on the job, but at home as well.

Tracy and Hepburn, who faced and fought with each other across the newspaper pressroom in Woman of the Year, are facing and fighting across the courtroom this time.  Seven years had passed since the intial match-up, and both players had matured, both physically and in their acting talents.  The humour has changed somewhat too–a little more sophisticated, a little more biting–with the “women’s rights” cause as the springboard.

The picture rescued what had been rather sagging box-office ratings for both stars, although both had been well-received a year earlier in State of the Union.

The film was a “fun affair,” both on and off screen according to those who were close by, with Hepburn’s close friends, Garson Kanin and his wife Ruth Gordon and director George Cukor making sure it all worked.

The supporting cast received–and deserved–as much credit for the success of the film as did the main players.  Judy Holliday is only slightly short of brilliant as the dumb blonde who shoots her husband.  And, it was this role which was directly responsible for her getting the screen assignment of her Broadway hit Born Yesterday.  Tom Ewell, Jean Hagen, David Wayne and Hope Emerson are all just right for their respective roles.  And, a bit of a motion picture flash-back, as old-time comedy star Polly Moran appears as a witness int he trial.

The Kanin-Gordon screenplay was nominated for an Oscar.  Time wrote: Adam’s Rib is acted as though the players found it funny, but actually, like many “sophisticated” movie comedies, it is more absurd than comical.

Cole Porter contributed the song “Farewell Amanda” which caught the ears of reviewers.  Time noted the “dismal lyrics which Cole Porter must have written while waiting for a bus.”

In the New York Times, Bosley Crowther noted: “To be sure, the plot is frail and the argument is not profound.  As a matter of fact, it gets quite fuzzy and vagrant as the picture goes along.  And that is the one plain weakness of the whole thing; it is but a spoof and the authors are forced to wild devices and shallow nonsense to wind it up.  But en route they contrive some grand theatrics, which are all in the motion picture’s range, to make for lively entertainment and passing comment on the home’s felicities.”

Crowther, only one of many who praised the work of Miss Holliday, notes: “(the) representation of a dumb, but stubborn dame is simply hilarious. Her perfect New Yorkisms, her blank looks, her pitiful woes are as killingly funny–and as touching–as anything we’ve had in farce in some time. And (Tom) Ewell asher husband, is likewise deliciously droll, making of this loutish fellow a full-bodied character.”

And, for the buffs, the familiar faces of Clarence Kolb as the judge who at times is forced to become ring-master in what becomes a courtroom circus, adds another dimension of mirth to the entire thing.

Under the table chasing pencils, or giving back-rubs in their over-size towels, Tracy and Hepburn and the audience, should all be having a ball.