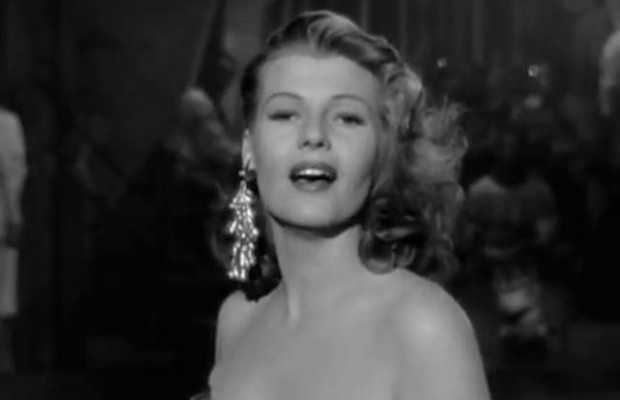 Toronto Film Society presented Affair in Trinidad (1952) on Sunday, October 30, 2011 in a double bill with Appointment with Danger as part of the Season 64 Sunday Afternoon Film Buffs, Programme 2.

At the time of its release, Affair in Trinidad had one valid virtue: an inside joke involving Valerie Bettis, a dancer who had recently made quite a name for herself on Broadway with her Tiger Lily ballet and who choreographed the film as well as playing the inebriated and flashy wife of a nervous saboteur. During the film after Rita finishes her second flamboyant dance, Miss Bettis, who had been one of the spectators to it, says with a completely straight face: “Gee, I wish I could dance like that!”

Everyone familiar with Miss Bettis’s brilliance found this to be a cinema moment delightful enough to cherish and suggested the film that might have been: a sober spoof of Gilda, instead of an imitation, and of other outrageous screen heroines who were involved in international intrigue right up to their naval bases.

Instead, Affair in Trinidad merely rehashed the doings of such damsels who dabble in spying with a plot that any ten-year-old could sing off-key with more originality. As Miss Hayworth so aptly put it some years later: “It wasn’t really a movie. It was a culmination of compromises made by everyone from the gateman at Columbia right up to Harry Cohn himself.”

Although the public has always been led to believe that nobody ever deliberately starts out to make a bad film, and this particular one was apparently conceived in sincerity and good intentions, the circumstances involving its production, and preproduction, would probably make a good movie.

Affair in Trinidad was Rita’s first feature film released in four years, and the public was therefore anticipating her return with great pleasure. Much of this pleasure could be derived from the fact that shortly after marriage to Prince Aly Khan, Miss Hayworth announced that she would probably never again make a film. Her divorce changed all that and was in actual arbitration during the time the film was in production.

And just four days prior to beginning principal photography, Rita announced her dissatisfaction with the script and advised Harry Cohn, through her Beckworth Corporation, that she would vacation until a script was revised to her complete approval. Well aware that the public and the exhibitors and the Columbia stockholders, of whom he was one, wanted Hayworth back on screen, Harry Cohn put writers James Gunn and Oscar Saul to work revising the script and sweet-talked Rita into beginning on schedule and shooting only those scenes which met with her approval. But everything was far from resolved and Affair in Trinidad was becoming known around Hollywood as Compromise at Columbia. After several weeks, when the script still wasn’t satisfactory, Rita walked off the film, maintaining that returning to the screen in an inferior vehicle might jeopardize whatever box-office power she still possessed. Her action caused Harry Cohn to suspend her, prepare a lawsuit against her and sue for damages of all costs involved while she held up production. Mulling that over, Rita elected to return and finish the film.

And when the trade-paper reviews appeared after the first sneak preview, nobody at Columbia suspected that Affair in Trinidad would out gross Gilda by more than a million dollars! Resigned to the fact that Hayworth apparently could do no wrong, Cohn reissued Gilda and announced that all subsequent films with the Love Goddess would be Technicolor specials.

For his black-and-white costume design for Affair in Trinidad, designer Jean Louis was nominated for an Academy Award (won by Helen Rose for costuming for The Bad and the Beautiful).

At the risk of provoking the wrath of many of Miss Hayworth’s partisans and film critics in general, Affair in Trinidad is another of those curious Hayworth films, like The Lady from Shanghai, which appears much better now than it did when first released. It’s handsomely mounted and a physically expensive production and Rita’s simulated song and sensual dance number, “Trinidad Lady,” is actually much better than “Put the Blame on Mame,” if for no other reason than the fact that it hasn’t been as overused, imitated or lampooned. And women’s styles immediately following World War II, when Gilda came out, have dated badly, while the Jean Louis creations Rita wears in Affair in Trinidad have a much more contemporary look.

There is still another perverse reason Affair in Trinidad manages, more than Gilda did, to hold an audience: the script is so predictable you are more or less hypnotized into watching it merely to confirm the fact that you know exactly what will happen next and can, therefore, feel quite superior to it. With Gilda, audiences always had the uneasy feeling that the projectionist had forgotten to screen one reel of it somewhere and the film concludes long before all the loose story ends have been explained.

The Films of Rita Hayworth: The Legend & Career of a Love Goddess by Gene Ringgold