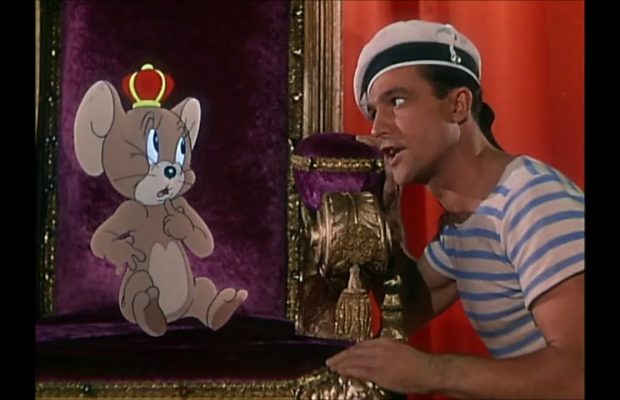 Anchors Aweigh was one of the most popular and successful musical films of the entire 1940s–it was the second ranking film of 1945 at the box-office, and was nominated for five Academy Awards, for Best Picture of 1945, Best Performance by an Actor (Gene Kelly), Best Color Cinematography, Best Song (“I Fall In Love Too Easily”) and Best Scoring of a Musical Picture, the only Oscar it actually won.  Much of the film’s appeal is still evident in 1982.  Firstly, the film featured three stars of musical films in the early blossoming of their careers.  Anchors Aweigh was the eighth film in the fourth year of a forty-plus film and forty-plus year career of Gene Kelly.  It was Frank Sinatra’s sixth film (but only third starring role) in the fifth year of a fifty-plus film and forty-plus year career.  Similarly, it was Kathryn Grayson’s sixth film in the fifth year of a twenty film, fifteen year career.  Secondly, Anchors Aweigh was an amalgamation of many of the popular escapist cliches of wartime America–servicemen on leave; budding romance; mischievous children; popular music and song blended with “high class”, classical music; Technicolor film; and cartoon performers.

Most of what “clicked” in 1945 still works in 1982.  Gene Kelly had just begun exerting the complete control over film choreography that eventually made him a legendary figure of the genre.  In Anchors Aweigh Kelly does three important dance numbers that express an impressive variety of style.  The first is his “Mexican Hat Dance” with a little beggar girl played by Sharon McManus.  Then comes an elaborate fantasy, a prelude to his role in The Pirate, danced to the Spanish fandango music of “La Cumparsita”.  The highlight of Anchors Aweigh is the third dance, a combination cartoon/live action piece with the mouse Jerry, of Tom and Jerry fame.  This four minute production took two months to complete, involving over ten thousand painted frames of film and a budget of $100,000.  But the segment has become a classic piece of dance fantasy, and elicits joy and amazement whenever it is played.  Kathryn Grayson, although she never quite became a film musical superstar of the Deanna Durbin/Judy Garland rank, brightened several MGM musicals of the 1940s and early 1950s with her operatically trained voice and pleasant looks.  Her role as the movie extra looking for an audition with pianist Jose Iturbi in Anchors Aweigh provided the basis of the film’s storyline.  And Frank Sinatra was at the paramount of his early career in 1945 as the hottest young singer in the world.  Anchors Aweigh is one of the most purely entertaining and enjoyable films of the 1940s.  It has several kinds of popular music, segments of the classics, important contributions to the art of dance on film, and fun–an unbeatable combination! 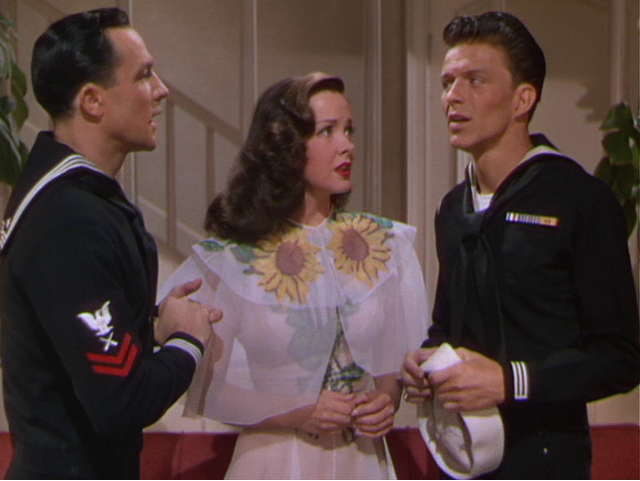