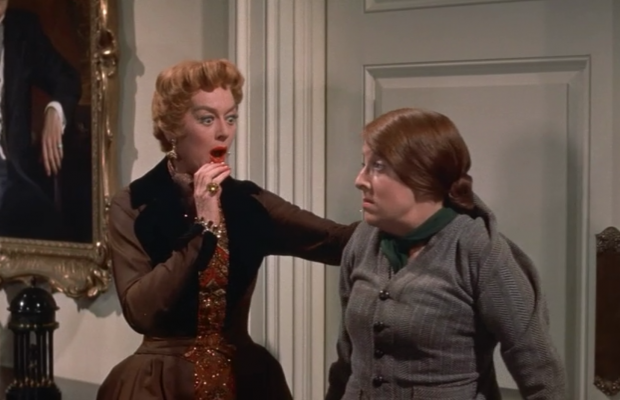 Patrick Dennis knew what he was doing when he sent Rosalind Russell the galley proofs of his book with a note, “You are my Auntie Mame for stage and screen.”  Mame is virtually a one-woman revue, a series of turns–Mame as hostess, saleswoman, telephone operator, Southern Belle, writer, actress–all are carried along on a strong electric current of personality, and the character works so well for Russell because she is perfect for the part with the outrageous clothes, zany behaviour and above all her unquenchable spirit.  Uproarious and inexhaustibly quick with a joke, she is also capable of touching the heart.  Before making the film, Rosalind Russell starred in the play for a year and ah half on Broadway (without missing a performance) and was followed by such luminaries as Greer Garson, Bea Lillie and Constance Bennett.  But there was, and is, only one Auntie Mame and that is definitely Miss Russell!

A contemporary review of the film by Derek Conrad in Films and Filming (Feb. 1959) capture much of the general critical and audience opinion of the time and it’s worth quoting here a few of his observations: “Before turning an evil eye towards the screen version, it would be a good idea to look at the original Auntie.  Auntie Mame Dennis is part grande dame (she could easily be taken for one of Lady Bracknell’s daughters, as long as Lady Bracknell was played by Edith Evans).  She has the scatterbrained vitality of a Betty Hutton crossed with the comedic noire of Hermione Gingold.  She delights in debunking anything that is conservative, suburban, pompous or pretentious.  She is not very accomplished at doing anything…but she tries to do everything.  It makes no odds what she does as long as she is her devastating self.  And her personal philosphy is, ‘Life is a banquet, and most poor sons-of-bitches are starving to death.’  (The film alters this line somewhat!)  That is Mame on paper.  What of her on Screen?”

“Rosalind Russell, in her first screen role since her neurotic spinster in Picnic and recreating her Broadway role almost manages to give a faithful rendering of Mame.  Almost, but not quite.  She has the exuberance, the wit and charm, but the screenwriters have not transferred the crazy situations of the book into anything like crazy scenes for the film…and Mame thrives on situations.  They have also given her a streak of sympathy, and sympathy to an offspring of Lady Bracknell is pure suicide.” 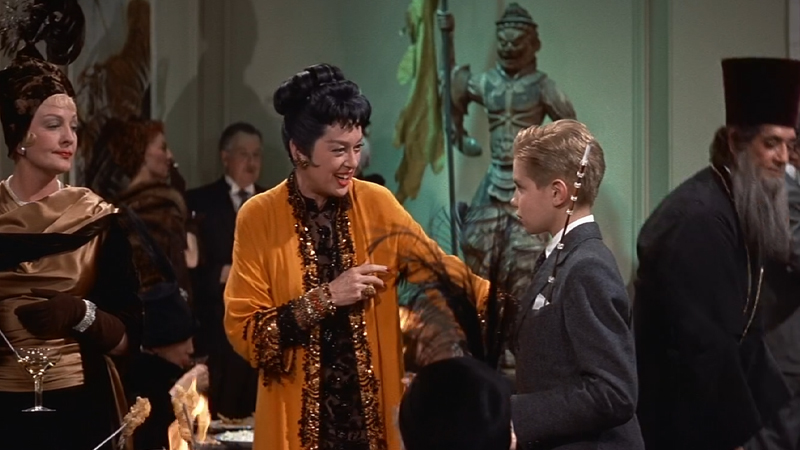 Here, I must disagree with the reviewer and side with P.H. in the Monthly Film Bulletin of Feb. 1959 who says “Sentimental interludes, affirming Auntie Mame’s real love for her orphaned nephew, serve as a sort of glue holding the film’s wilder comedy episodes together, and not the least part of Rosalind Russell’s skill is evident in the tact with which she keeps these from becoming unbearably cloying.”  The novel’s Auntie Mame was, perhaps somewhat tougher, or harder, but I feel that adding slightly softer edges to the unrestrained madcap, and rather brittle character of the novel, works much better with an audience.

However, the rest of Derek Conrad’s review is right on target!  “Mame on the screen comes dramatically into her own in the latter part of the film…outrageously debunking some dreadful nouveau-riche suburbanites whose snotty-nosed Park Avenue daughter is out to catch Mame’s nephew.  When Mame hosts a dinner party at her dreadfully moderne apartment, her repulsive guests are fed rattlesnake canapes to be washed down with a cocktail that flames like high-grade petrol, while continually haunting the far corners of the room is Mame’s pregnant secretary Agnes Gooch, muttering something about being a wronged woman.  Pure joy and worth every penny of admission.”

“Morton Da Costa makes an auspicious debut as a film director”…”his direction of players leaves nothing to be desired”…”he also deserves credit in getting over the humourous side of the death of Aunti Mame’s husband (Forrest Tucker–at last off a horse!)–amusing, thank goodness, instead of mawkish.  Deserving honourable mention among Mame’s supporting players are Fred Clark, a delightful portrait of a stuffy bank trustee, Joanna Barnes who is ad-mass to a “T” as Manhattan’s gift to suburbia.  England’s Coral Browne making her film debut as a madly ‘dashing’ actress, and Peggy Cass, being horribly drear as Agnes.”

Real film buffs will appreciate seeing Lee Patrick (Mrs. Upson), and the young Roger Smith (in his pre-Ann Margaret days) appear as the mature Patrick Dennis.  I will allow Mr. Conrad to have the final word.  “Life is a banquet…why not save yourself from starving to death by letting a little of Auntie Mame’s recipes for living rub off on you?”