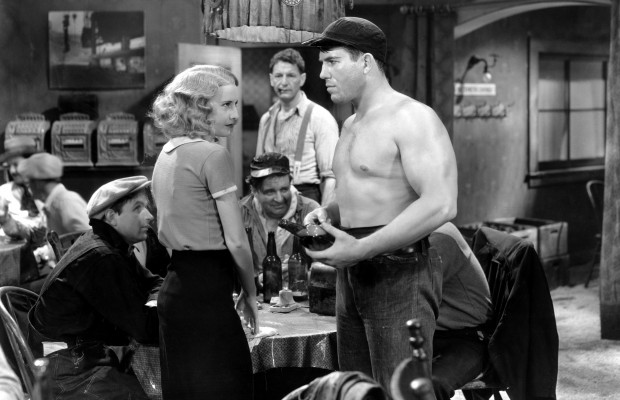 Toronto Film Society presented Baby Face on Friday, May 10, 2013 as part of Season 66 May Festival: The Pre-Code Weekend.

I was surprised that there were no notes in the William K. Everson collection about this film because the first time I saw it was when he brought it the Briar’s sometime back in the early 80s.  We were all excited to get to see this pre-Code film that apparently was the “straw that broke the camel’s back” in regards to the Production Code being implemented.  Warner Bros., in a gesture of compliance to suit James Wingate from the Hays Association, withdrew Baby Face from release and reedited the film.  Both the Original Theatrical Release and a Prerelease Version restored by the Library of Congress are available.  Today we’re showing the Prerelease Version which includes the censored scenes.

Wherever this one can get by its rough stuff may get some business.  But it won’t be the right sort or enough, because ‘Baby Face’ is blue and nothing else.  It possesses no merit for general or popular appeal, is liable to offend the family trade and can’t count on any juve attendance.

Story is that of a girl who goes tramping through life for 70 minutes of nothing but affairs with a flock of men, each of whom means advancement to her.  The only time Lily says ‘No’ is in the first reel.

Taking her father’s colored servant girl along (the girl remains with her in her climb to the financial top as a constant unsavory reminder of Erie), Lily goes to New York upon the advice of an old cobbler who’s supposed to be a master mind-philosopher, and who tells Lily about the power of her beauty—as if she isn’t hep.

Neither the script or the actress ever permit Lily to soften up.  The script leaves here with no redeeming characteristics, upon the excuse that Lily’s early environment and manhandling hardened her.

Barbara Stanwyck plays it precisely as it has been written.  She makes Lil a beautiful bum.  Result is a character that eventually robs its own audience of any sympathy that might have been created in the first few hundred feet.

There is some comedy now and then, but seldom intentional.  The Strand audience gave it the snick in the wrong spots, especially after the first quarter, when Lily starts to bowl ‘em over with just a look and a flash at the gams.

Miss Stanwyck wears a salon full of clothes, which will interest the women more than anything else, and she’s fortified with first-rate male support.  George Brent, featured; Donald Cook, Henry Kolker and other gentleman pushovers try hard to be believable as they topple.

This is reputed to be a remake on the first print, which was considered too hot.  Anything hotter than this for public showing would call for an asbestos audience blanket.

‘Baby Face’ and Lil are just too bad all the way.

“Baby Face,” the picture which recently aroused the ire of Will Hays and also was responsible for the resignation of Darryl Zanuck as assistant to Jack Warner at the Warner Brothers’ studios, is now on exhibition at the Strand.  It is an unsavoury subject, with incidents set forth in an inexpert fashion.

Barbara Stanwyck acts Lily Powers, who becomes knows as Baby Face.  She is presumed to have good intentions, but they are discouraged by her father, who keeps a disreputable speakeasy.  A cobbler named Cragg, presumed to be an omnivorous reader, tells Lily of her beauty and the power she might have over men.  This inspires Lily to leave for New York, where through a flirtation she succeeds in finding employment.

Hoping for promotion from her position, she uses her wiles on a department manager and subsequently attracts the attention of the cashier, a young man named Stevens, who is engaged to marry Ann Carter, daughter of the first vice president.  Evidently there is not a decent man in this bank—not one who scorns to have an affair with this tarnished Lily.  Carter himself becomes infatuated with her and one day he is shot and killed by Stevens, who ends his own life.

It is a pretty state of affairs when the directors of the bank are faced with the scandal, but later they have more anxious moments, for Trenholm, who is made president of the institution, encounters Lily in Paris, where she has been sent to work in the bank’s branch after her threat to sell her story to a newspaper.  Trenholm becomes so smitten with Lily’s beauty that he marries her.

In the course of the closing episodes, Lily, who has a fortune in jewellery and $500,000 in cash, at first decides to leave for Paris again, although she knows that her husband needs the money to save himself from imprisonment.  Once aboard the steamship, however, she suffers a change of heart and is supposed to do her one good deed of the story.