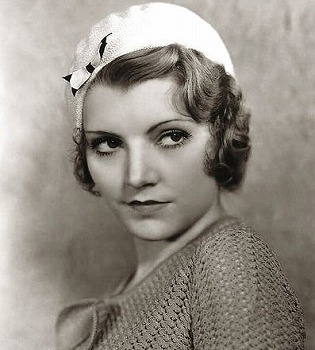 Toronto Film Society presented Back Page (1934) on Monday, January 15, 2018 in a double bill with Deluge as part of the Season 70 Monday Evening Film Buff Series, Programme 4.

Tonight’s second Peggy Shannon film Back Page is a very different story from the film we just saw.  It was produced by Pyramid Productions, a company that made only two films.  There is no credited producer and the accomplished but anonymous director used the pseudonym, “Anton Lorenze”.  Very mysterious.  A smart little movie it is—but with a female lead not usually seen in pre-Codes, but a pre-Code non-the-less.  I think what most impressed me was that it was a story about a woman who is able to take control of her life and the situation she is thrust in by using her brains and not her body.  A real delight and it again proved that Peggy Shannon was no slouch in the acting department in a story about a clever woman, a newspaper in a small-town community, ethics, politics and greed.  It’s nice to know some things never change.

It also features a quirky Sterling Holloway, the distinctive voice of Winnie-the-Pooh.  With three subplots in 65 minutes and sharp dialogue by writers with credits stretching from 1915 to the 1946 The Jolson Story, Back Page is a worthwhile discovery.

But before we watch the feature film, we thought we’d show you a Dogville short.  If you haven’t seen one of these before, they are rather quirky little shorts with dogs used in place of people and were very popular at their time of release.  Directed by comedy veterans Zion Myers and Jules White, these unusual attractions showcased creatively costumed “talking” dogs of various breeds, spoofing the noble and naughty behaviour of humans.  A nationwide theatre owners poll in 1930 rated the Dogvilles as the best short subjects over more legendary comedy and musical series.

Susan Orlean, who wrote the excellent and detailed book, Rin Tin Tin: The Life and the Legend, takes a brief moment to mention the Dogville shorts saying that they are “engrossingly bizarre.  They were meant to be light comedy, but their plots are sometimes uncomfortably adult, involving war, murder, infidelity, and attempted rape.  Some of the dogs in the series became well known, especially Jiggs, a mutt with a pushed-in nose who was supposedly able to really talk, although his vocabulary was limited to ‘Mama,’ ‘Papa,’ and—‘hamburger’.  But none of the Dogville dogs became a star in their own right.  In 1929, when the first Dogville shorts were released, the world was on its heels, looking for some comedy.  The stock market had collapsed in October, and the U.S. economy was spinning into deflation.”

Co-director Zion Myers was born in San Francisco in 1898 to immigrant parents, his father from Australia and his mother from Austria.  When he was just a toddler, the family moved to LA and they became involved with the movie industry when Zion’s father, who had been a rabbi in Australia, became one of D.W. Griffith’s advisors for the biblical sequences in Intolerance.  Zion’s sister Carmel entered the movies as a trained dancer and Zion joined the industry when he became Carl Laemmle’s secretary at Universal.  This is where he met Irving Thalberg who moved to Metro and whom Zion later joined as a writer in the late 1920s, specializing in comedies and novelty films.

Jules White (né Julius Weiss) was born in Van Nuys, California to Austrian-Hungarian parents.  He began working in motion pictures in the 1910s as a child actor for Pathé Studios.  He also has a Griffith connection by having played a small role as a Confederate soldier in The Birth of a Nation.  During the 1920s one of his brothers, Jack, had become a successful comedy producer at Educational Pictures, with Jules working for him as a film editor.  Jules became a director in 1926, specializing in comedies.

Either Zion and Jules already knew each other from boyhood, teaming up before heading to MGM or they met and joined forces while working at MGM, depending on different sources.  Regardless, they conceived, co-directed and voiced these unusual shorts, spoofing a number of block busters such as MGM’s first all-talking picture and the first sound film to win an Academy Award for Best Picture, the 1929 Broadway Melody with Dogway Melody.  Other titles which you will recognize the films they are spoofing are So Quiet on the Canine Front, The Big Dog House and Trader Hound.

Both men were responsible for directing and producing or writing short comedies starring The Three Stooges while they co-directed the 1931 feature film Sidewalks of New York starring Buster Keaton as well as launching a series called “Goofy Movies”, one-reel parodies of silent-era melodramas.

Tonight we’ll be showing the first Dogville short, Hot Dog.  We hope you enjoy it along with Back Page to follow directly. 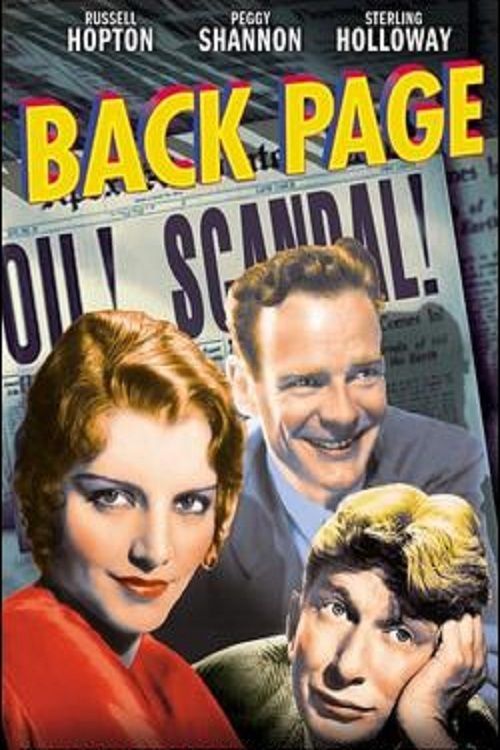 Ah, journalism. Remember that?  Back Page, a cheap programmer with a great protagonist, is a paean to helping the public out of a jam while still looking out for numero uno.

This is all masterminded by Jerry (Shannon), a woman journalism who spends most of her career walking into rooms and watching men’s eyes bug out when they realize ‘Jerry’ is short for Geraldine. Jerry’s just landed her first big scoop at a big city newspaper– a love nest suicide where noted grocer chain magnate John Smith was apparently egging his lover on to kill herself when she began to displease him– until the story itself is killed by a sensitive editor.

Jerry is fired, but won’t take a husband to make up for it, as she’s determined to make her own way in the world. Her reporter boyfriend, Brice (Hopton), suggests she try out an editor position in a small town and then work her way back up to the city. She heads to a tiny town named Apex, where the biggest news is just how deep the dust has gotten on the office desks.

There is one point of interest, though, and that’s an oil well on the town outskirts that has drawn in a lot of local’s money at the behest of banker Blake (Edwin Maxwell). Blake, being a banker in the early 1930s, is the villain of the piece, and also Brice’s uncle, making things a little complicated.

Into this steps Jerry, who bowls past everyone’s dropped jaws (a girl reporter?!) and dismantles all of her opponents with ease, as each man demonstrates a cocky overconfidence or cruelty based solely on aggressive arrogance. Jerry is more clever than the town of Apex combined. Early on she manages to offend the paper’s biggest advertiser, dopey old money grocer Nate (David Callas), and within a few minutes of applied psychology has quadrupled his ad runs.

When Blake tries to buy out all the townspeople by pretending the well was a failure, Jerry dismantles his ploy and saves the day. But other problems surface when she learns that Blake owns the newspaper, and he’s about to remake the newly-rich town to his own ends.

Russell Hopton would surely be on few people’s list of romantic leads– he’s pretty much Ned Sparks at 1.5 speed– but he’s good in an innocent way. Sterling Holloway has some dopey laugh lines, but is pleasant enough. I really enjoyed Claude Gillingwater’s Webster, the old newspaper owner who warms up to Jerry almost instantly and returns to life from a moribund state. He’s sweet for his type.

But the real star of the show is Peggy Shannon, one of the rare actresses of this time given a script where the woman character is allowed to completely dominate everyone and everything. You can tell the low budget is hurting her performance to an extent– sometimes and the others are merely acting at each other than with– but then you can also see the joy dancing in her eyes as her ambition begins its quick ascent.

Back Page looks good on what was obviously a limited budget. Though a lot of the same sets are reused with rearranged furniture and the flubbed lines become noticeable, the production has a fairly witty and fun script. It also benefits from a large assortment of extras, who buzz about to cover up the plain walls of the flats.

Star Peggy Shannon would be dead less than a decade later due to alcoholism, though she’d have plenty of small parts between then and here. Between this and Deluge, it’s apparent she had some measure of talent, something that worked even if it never shone. But you can see it, and it’s worth seeing.

By Danny Reid of Pre-Code.Com