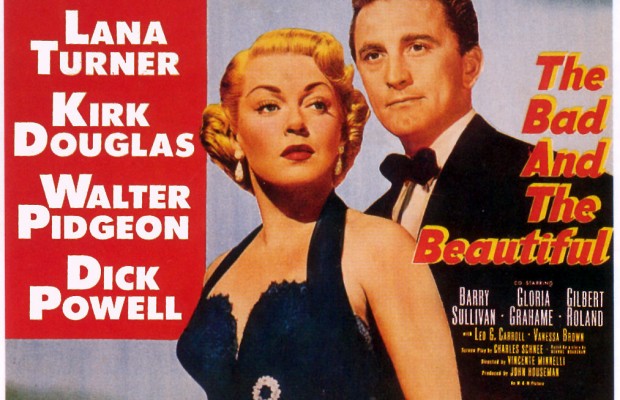 Toronto Film Society presented The Bad and the Beautiful (1952) on Monday, November 5, 1973 in a double bill with On Dangerous Ground as part of the Season 26 Monday Evening Film Buff Series, Programme 1.

The FILM BUFF SERIES begins and ends it seasons with two diverse views of Hollywood by Hollywood, The Bad and the Beautiful and Sunset Boulevard, two films that continually relate to and feed upon other films both film.  Both seem to agree in their verdict on Hollywood–the transient nature of success, the violent dislocations of private life, the folly of uncontrollable ambition, the triumphs and debasements, with the end a graveyard of overgrown hopes and illusions.

In The Bad and the Beautiful the rise and fall of a ruthless producer is seen through the eyes of three people whose lives he has changed and who hate him. As in Citizen Kane, the dynamic center of the film is not directly approached but glimpsed from a variety of angles. The producer’s ‘Rosebud’, It is hinted, lies in his relationship with his father. Vincente Minnelli has directed his film with consistently entertaining invention and richly assimilated detail, some of it derivative [the projection theater scene recognizably from Citizen Kane], but all of it alive and intelligent. A Hollywood party reeking of exhibitionism, the actresses’ hysterical drive in her car at night after learning she has been betrayed, the glimpses [often malicious] of films in production, the great atmospheric shots of the studio, a hectic evening spent trying to ‘entertain’ a star before springing a script on him, a group of aging extras, sullen, withdrawn and melancholy, being fitted into cat-men costumes too small for them for a shoddy horror film–these episodes have a rare incisiveness and convey not a conventional slick disenchantment but a bitterness as original and idiomatic as Scott Fitzgerald’s.

Minnelli has stated that the central figure is a composite of several people including David O. Selznick, that Val Lewton was the inspiration for the scene concerning the horror film, and that the character of the drunken star whose father was a famous actor was based partly on Diana Barrymore. All of the stars give excellent performances and Gloria Grahame received one of its five Academy Awards for her role as a maddening Southern Belle. It is interesting to note that in Minnelli’s second film on film-making, two Two Weeks in Another Town, made nine years later, scenes are run from The Bad and the Beautiful showing it as Hollywood’s model of a great film.

Vincente Minnelli is renowned for his brilliant style, his elegance, is masterly use of the decorative image. He came from a theatrical family and worked on many Broadway revues as designer and producer, including two years as art director with Radio City Music Hall, before directing his first film in 1943. He has divided his career fairly evenly between musicals, comedies and dramas with an American milieu, and he was greatly responsible for the artistic revival of the film musical in the 1940s. In interviews he has said:

“With each film the kind of story that you’re using has to dictate a certain style and a certain visual feeling. I try to make each film completely different from the last. I try to find the style that belongs to that particular film, not to any other film. The search for an appropriate style is as valid for musicals as it is for drama. One has to tell a story in as mannered a way as possible–to create a little magic. It is not always easy to catch each delicate nuance, to be able to allow the characters to reveal themselves incongruently.”

“That effort to reconcile the ideal or personal dream with reality or behaviorism in the real world is the eternal conflict. I think that is the essential, or the most important thing, in any medium–so naturally I always look for that.”