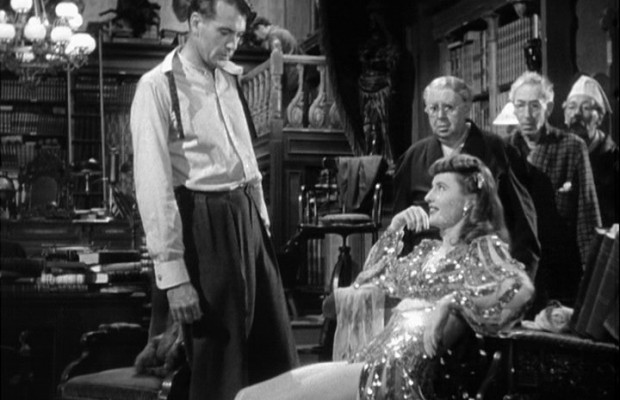 Toronto Film Society presented Ball of Fire (1941) on Monday, December 8, 1975 in a double bill with One Way Passage as part of the Season 28 Monday Evening Film Buff Series, Programme 2.

When Ball of Fire came out I remember thinking it was one of the funniest movies I’d ever seen–fast-paced comedy of character and of dialogue and an absolute delight from beginning to end.  Then, as often happened with Sam Goldwyn’s independent productions, it just dropped out of sight.  Even when TV came along, it still stayed buried.  It became a kind of legendary movie.  Every so often when great comedies were the subject of conversation someone would say, “But do you remember Ball of Fire?” and those lucky enough to have seen it would immediately start exchanging reminiscences of favourite scenes.  I finally got to see it again at a private screening a couple of years ago and was glad to find that time had been powerless to dull its zip and that I could now appreciate its wit as well as its humour.  Probably because it has been so hard to see for so long, comparatively little has been written about it and its title seldom crops up in books about Hawks, comedy, the period, its stars, etc.  Contemporary reviews were enthusiastic, but shallow, the reviewers not seeming to fully “get” it or to realize that it was something more than another fine comedy in an era that was producing fine comedies almost every month.  Now that it has surfaced again at last, old-timers can savour it like the vintage wine it is and several later generations are in for the real treat of seeing it for the first time.  I predict that it will now begin to gather more considered critical appraisal, because I don’t think there is much doubt that it is one of the great comedies to come out of Hollywood and a lasting achievement on the part of everyone concerned in its making.  That its contemporaries in the business recognized its quality is indicated by the fact that Barbara Stanwyck, the musical score, the original story and the sound recording were all nominated for Academy Awards.  It was widely believed that Gary Cooper’s marvellous portrayal would have won him an Oscar had it not been for the fact that his immediately preceding picture, Sergeant York (also directed by Howard Hawks) did win him the Best Actor Academy Award for 1941.

Ball of Fire is somewhat unusual in being the collaborative effort of a number of people not primarily known for comedy.  Howard Hawks (the subject of an entire TFS Summer Series) is probably best-known for his action-dramas (The Big Sleep, Red River, Rio Bravo–to bes hown on the TFS Main Series February 23/76–El Dorado, Hatari!, etc.), but he was also a comedy master (Bringing Up Baby, Monkey Business, Man’s Favorite Sport?, I Was a Male War Bride, etc.) and once said, “Whenever I hear a story, my first thought is how to make it a comedy, and I think how to make it into a drama only as a last resort.”  Coop is also best-remembered for his action and dramatic roles, leading Howard Barnes in his contemporary review in the New York Herald Tribune to call his performance in Ball of Fire “the sort of amusing and even hilarious performance which I would scarcely have expected from him.  Before you know it he’ll be a rounded actor as well as a great one.”  Barbara Stanwyck in later years became so identified with neurotic or domineering roles that few remember that in those days she could knock off such delights as The Lady Eve and Sugarpuss O’Shea.  She came honestly to the part of Sugarpuss (who I remember as a nightclub singer-dancer, but who most of the books call a stripteaser) because she was dancing in New York speakeasies when she was 15, had her first Broadway success in Burlesque (1927) and was soon to star in the movie Lady of Burlesque (1943).  Her singing in Ball of Fire, by the way, is dubbed.