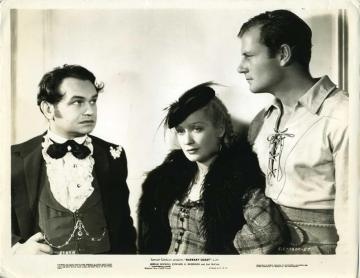 Miriam Hopkins was a horror to work with. I worked with her in Samuel Goldwyn’s Barbary Coast. Well, you couldn’t exactly say that. I tried to work with her. She made no effort whatever to work with me.

However, Sam Goldwyn, who denied absolutely that he fired me out of the silent film he’d made with the Selwyns (Fields of Glory), worked very hard to persuade the Warners to loan me out for Barbary Coast. While they were gleeful about the success of the Columbia film (The Whole Town’s Talking), they now thought me hot again and wanted me for their very own. What they wanted to put me in was quite another matter more of that miserable gangster, a character of whom I was growing wearier and wearier all the time. The Goldwyn film, written by Ben Hecht and Charlie MacArthur, offered good writing, a fascinating character, and a director named Howard Hawks.

I shall spare you the titles and the directors Warner’s offered me and certainly the miserable scene that went on in the front office as I turned down every script and simply looked haughty when they mentioned suspension, that dread word that meant you’d not be paid and could not work for anyone else. While their other troubles with Bette Davis and Olivia de Havilland and, I suspect, Errol Flynn and Jimmy Cagney, were matters of public notice, I tried to keep my differences private. I had long since learned that you could do anything to Jack Warner except humiliate him. (It is easy to do; under that tough clown’s façade he is easily hurt. Despite his wealth and power, I have always felt him to be insecure. I mean it as a compliment.)

Finally, after Goldwyn must have offered more than twice my salary, Jack let me go, assuring the newspapers the loan had been mutually agreeable, and even letting one columnist say that he was so concerned over my career that he had ranged over every studio to find something suitable for my talents. The inference was that, if not minimal, they were certainly limited. Jack Warner was always certain of the last word, and we talk of it often and laugh about it. Jack would rather laugh than anything in this world except have the last word.

Without consciously affecting the posture, I decided it was necessary to act younger than ever, more aggressively, more affirmatively, more conscious that each day must have meaning. Howard Hawks was the first recipient of that attitude. Or was it Miriam Hopkins?

It seems remaining with me still were some of the remnants of my childhood chiefly an almost instinctive reaction to people: from the very beginning, when I was introduced to somebody, or even saw him from a distance, I either liked or disliked him instantly. I have a psychoanalyst friend who tells me in a very scholarly way that this is not in the least unusual among the foreign born and minorities. They (we) tend to be suspicious of an attitude, a look, narrow eyes, thin lips, blond hair. I cannot agree that this is altogether a fact. If you will remember, when I discussed long ago the Principal of Public School 137, she automatically had all the things I was taught to dislike. She was tall, Anglo-Saxon, thin-lipped, but at the same time she was warm and outreaching and friendly. Above all, she did not patronize me.

So I think my psychoanalyst friend is wrong. But people do give off auras and I respond to them automatically. It is not only with human beings that I have this weakness of character; it is also with paintings.

At the time of Barbary Coast, my character flaw of first impressions was at its height. All of which, of course, brings me back to Howard Hawks and Miriam Hopkins.

Howard seemed to be patrician, aristocratic, and I sensed he was looking down his nose at me. I’ve learned to know him well since, and my initial assessment of him was wrong. His manner was concealing his own doubts, his own fears, his n insecurities at starting a new picture with a bunch of temperamental actors.

I do not propose to say the same thing about Miriam Hopkins. She was puerile and silly. There was one thing I recognized in her that could have made us friends: She, too, had come from the stage; she, too, felt that movies were beneath her. I had gone through the same thing; I had been graduated from that stage.

How odd, then, for me to be the recipient of the kind of snobbery that I, myself, had indulged in for so long! Even though I didn’t know it then, it was clear (in the words I spoke over and over again on the screen) that I could dish it out but I couldn’t take it.

In addition, the set of Barbary Coast was highly politicized. As I look back on it now, I really don’t know the individual political stances of the company, but I’m sure of this: Hecht and MacArthur were liberals; Howard Hawks, Miriam Hopkins, Joel McCrea, Walter Brennan, and Harry Carey were not liberals. We were two warring camps, and that kind of deep dispute was going on in every studio and every living room.

The arguments on the set were appalling; as a result, there was little socializing among us. There was a good deal of polite freezing and occasional bursts of rage.

This political sentiment took its toll in many ways. Miss Hopkins complained bitterly about every line, used every trick in the book to upstage me. I had long ago learned that these upstaging manoeuvres would not work at all in films. The cutter could attend to them.

But when Miss Hopkins refused to stand on her marks, those little triangles of masking tape that set the actor within the proper range of the camera, it was too much. What was really too much was that Miss Hopkins, in period costume and headdress, was taller than I. When we did a scene together, Miss Hopkins wanted me to stand on a box. I refused, not only because it was undignified and made me self-conscious but because I was unable to play with any sincerity high on an insecure perch. My suggestion was that Miss Hopkins take off her shoes. When I think of it now, I suspect she could not play with any sincerity standing in her stockings.

There were other problems between us. In the making of a picture, frequently a scene between two people is broken up so that you get a closeup of one and then the other. When the closeup is of you, you play a love scene to a camera lens, and the other actor reads the off-scene lines from beside the camera. This is common courtesy in the making of a picture, and even the most illustrious of stars are willing to do this difficult chore. But Miss Hopkins was not.

When they did my close-ups, I read my lines and Miss Hopkins lines were read by the script girl. This infuriated me, and my revenge was to elaborately read the off-scene lines when it was Miss Hopkins turn for a closeup. This taught her nothing.

Miss Hopkins is recently gone, and I’m sorry about that, of course. However, since these matters might help other young actors, I’m forced to proceed with them. The indictments:

2. Miss Hopkins would never read a line precisely as it was written, thus not cuing me.

3. Miss Hopkins would make us all stand around and wait while she complained bitterly about her costumes.

4. Miss Hopkins indulged in every trick to delay, to confuse, to obstruct and to prove that she and not I was the star.

As a result, one day, I told Miss Hopkins off. I shouldn’t have done it, but I was fed to the teeth. I reeled off a litany of her mischief. In the first place I told her that temperament had gone out of fashion that it had worked in the days of Fritzi Scheff, Mrs. Fiske, and Mrs. Carter but it simply did not have any place on a movie set. Then, thinking of her own good, I told her she was far too conscious of the camera; she hugged it and thus defeated herself. I showed her how, in her attempts to upstage me, she would back up on her own lights and I did all this, unforgivably, in the presence of the cast and the crew. They remained silent.

The next scene we had to play was one in which I had to slap her. Slapping, to say nothing of hitting, punching, kicking, and general brutality in films is usually faked. I wanted to rehearse this fake scene with the lady. But she wouldn t have it. She looked me straight in the eye and spoke very loud so that the entire company could hear.

“Eddie,” she said, “let’s do this right. You smack me now so we won’t have to do it over and over again. Do you hear me, Eddie? Smack me hard.”

I followed her instructions. I slapped her so you could hear it all over the set. And the cast and crew burst into applause.

If you will examine the credits for that movie, you will see, almost at the end, the following: Sailor (thrown out of saloon) David Niven.

Whether David applauded, I know not. I did not meet him for years. When it happened, we scrupulously did not discuss Miriam Hopkins or my atrocious behavior.

All My Yesterdays by Edward G. Robinson with Leonard Spigelgass