Toronto Film Society presented Beau Geste (1939) on Sunday, December 1, 1985 in a double bill with The Mark of Zorro as part of the Season 38 Sunday Afternoon Film Buffs Series “A”, Programme 3.

Beau Geste was originally filmed in 1926 with Ronald Colman.  It became a very successful film and led to many cheap imitations, so that the theme of the French Foreign Legion became over-worked.  In 1938 William Wellman announced that this next project would be Beau Geste, to be filmed in Technicolor with Fred MacMurray in the lead role.  The studio, Paramount Pictures, wanted this remake to be an exact replica of the original and ordered Wellman to film it in black and white.  Paramount also insisted that the lead be played by Gary Cooper (although neither of the two actors fitted the role of a genteel Englishman portrayed in the novel).  This was to be the last film that Gary Cooper made under his contract with Paramount.  All the performances were praised, especially Brian Donlevy who steals almost every scene he’s in with a squinty-eyed, snarling performance.  Beau Geste was filmed in Yuma, Arizona, in the middle of the desert on the exact location as the first film.  In fact, the original fort was still standing, but could not be used due to too much deterioration.

The theme of the Foreign Legion was very close to William Wellman.  At the time of the first World War, Wellman was in the Legion as an ambulance driver, and when America entered the war he became an ace pilot.  After the war Wellman went into the film industry where he worked his way through Fox.  By 1927 he was sufficiently established to land an assignment as the director of the now classic film Wings.  Wellman had a very diversified career, directing such films as Public Enemy, A Star is Born (1937), and The Ox-Bow Incident. 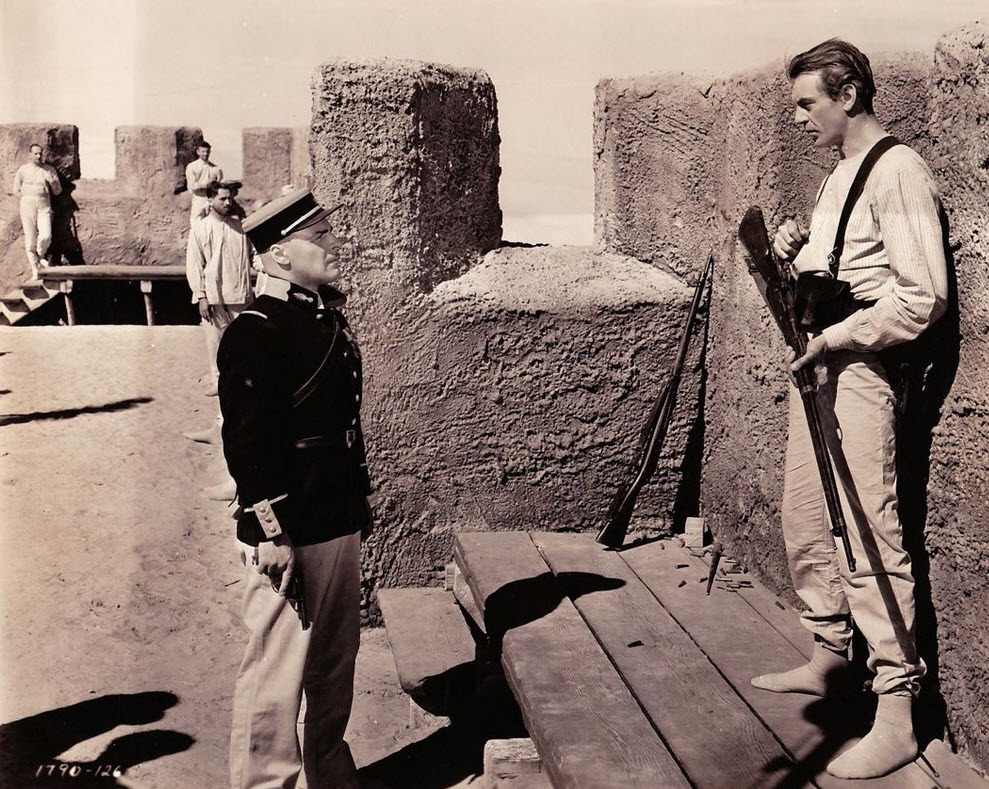 Robert Carson, the screenwriter, and Wellman stuck very close to the original screenplay.  It uses the flashback method of approach in unfolding the romantic adventures of the three Geste brothers, a missing gem, a debut of honour, and savagery in the Foreign Legion.  Beau Geste clearly benefited from Wellman’s bold composition and fluid camerawork.  The film concentrates more on the action and brutality of warfare in the Foreign Legion than on the comradeship depicted in the novel.  The production has all the vigorous realism and spectacular sweep which characterized many of Wellman’s films.  The battle scenes are rhythmic, with strong tracking shots making each scene stand out more clearly than in the original.  Paramount was so sure that their version was better than the ’26 version, they invited critics to private screenings showing one reel of the silent then one reel of the remake.  This stunt nearly blew up in their faces, however, when many of the critics still preferred the silent version and went to great lengths to say so.  Universal remade the film in 1966, in Technicolor and scope, but it seemed like a dull made-for-television movie.  Only the feeblest attempt was made to incorporate the original story, by only having two brothers and making them Americans.

Although the film is questionable on its political perspective, it remains high in values like bravery, chivalry, and honour.  Many today will still debate which is the better film, but Beau Geste remains one of Wellman’s most popular films.