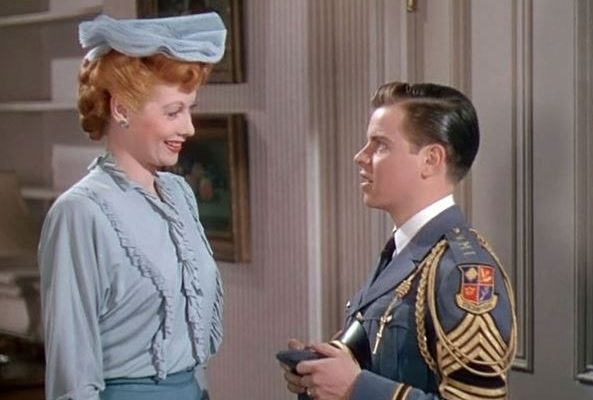 In this adaptation of the 1941 stage hit, Best Foot Forward follows a movie star with her career on the skids agrees to attend a military academy’s prom as a publicity stunt. Hedy Lamarr refused to play the unflattering role. Lana Turner’s pregnancy with daughter Cheryl saved her from the project. Lucille Ball replaced Lana. Though her character here is named “Lucille Ball,” her real career didn’t mirror the character’s story. Costume designer Irene made the most of Ball’s abilities to showcase beautiful costumes, and Lucy looks wonderful in this peppy Technicolor concoction. Among the film’s romantic shenanigans, Harry James and His Music Makers let loose with “Two O’Clock Jump” and “The Flight of the Bumblebee.” The show’s rousing closing song later became the tune “Buckle Up For Safety,”“Buckle Up For Safety,” a public service ad on American TV during the 1960’s and 70’s. This lively film showcased several promising newcomers, but it was the swan song of another very talented young actress.

Delightful child character actress Virginia Weildler (1927 – 1968) began film work at age 4. Always a precocious little girl, she had a knowing gleam in her eye and a great way with a line that made her popular with directors and audiences. After several years at RKO, she was picked up by MGM in 1938 and her talents blossomed. Her career peaked in 1940, when she played Mickey Rooney’s creative little sister in Young Tom Edison and Katharine Hepburn’s smart-aleck sibling Dinah in The Philadelphia Story.

When teenaged Shirley Temple signed with MGM in 1941, Virginia was abruptly bumped to secondary status. After Best Foot Forward, where she is almost unrecognizable in glamour-girl makeup, she left films. She retired from show business altogether a few years later. She married a Navy officer and they named their two sons Ronald (after Colman) and Gary (after Cooper). She died young, of a heart ailment at age 42. After her death it was revealed she had suffered from rheumatic fever as a child.

Nancy Walker (1922 – 1992) was born Anna Myrtle Swoyer, the daughter of vaudevillian Dewey Barto. Her mother died when she was an infant, and the girl lived a nomadic life on the road with her father and sister. Despite her successful career and a happy marriage, Walker was plagued by chronic insecurity.

She was aggressive and small (4’10”), and naturally funny. She intended to be a singer like her sister Betty Lou Barto, but comic roles as a brash buttinsky proved to be her forte. When she auditioned for the New York production of Best Foot Forward in 1941, producer George Abbott mistook her for actress Helen Walker and signed her for a bit part. Soon into rehearsals, her talent became apparent and she was given a much larger role: The Blind Date, a character who doesn’t even rate a proper name (she’s also the only girl who doesn’t get frilly sleeves on her prom dress!). Walker was a tough enough personality to carry it off without pathos. The show was a smash hit, and she kept the name she‘d been given by accident, “Walker,” for luck. She first went to Hollywood for the film version. Walker met her husband, a vocal coach, when she lost her voice during the run of a 1948 stage musical. She was nominated for two Tony awards during her many years on Broadway, but by the 1960s she had a hard time finding stage or film work.

Television was the answer, and in the 1970s Walker played many memorable roles. She was Rosie, the waitress in Bounty paper towel commercials, extolling “the quicker picker-upper” from 1970 to 1990. On McMillan and Wife she played wisecracking maid Mildred. The Mary Tyler Moore Show cast her as Rhoda Morgenstern’s meddling mother Ida, a role she continued in the spinoff series, RhodaRhoda. Though she was nominated for seven Emmys and four Golden Globe awards for her work on series TV, she never won. She branched out, directing TV sitcoms. In 1980, she directed her only feature film, the ill-advised disco musical Can’t Stop the Music, starring Bruce Jenner and the Village People. Walker was co-starring on the sitcom True Colors in 1992 when she was diagnosed with lung cancer. She died shortly before her 70th birthday.