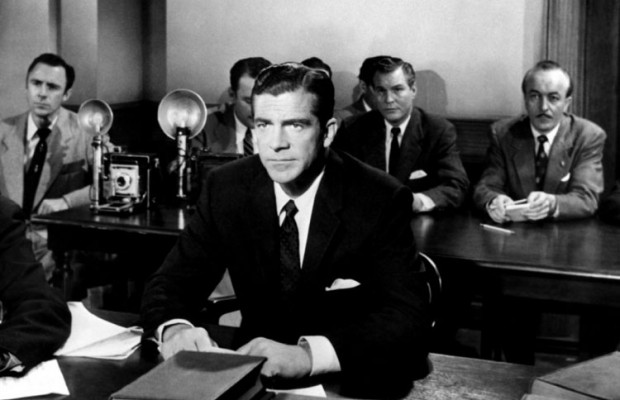 Toronto Film Society presented Beyond a Reasonable Doubt (1956) on Monday, July 21, 2014 in a double bill with Shock Corridor as part of the Season 67 Summer Series, Programme 3.

Austin Spencer, a newspaper publisher, wants to prove a point about the inadequacy of circumstantial evidence and also to expose the ineptitude of the city’s hard-line district attorney. He persuades Tom Garrett (Dana Andrews) to participate in a hoax by planting clues that will lead to his arrest for the murder of a nightclub dancer, Patty Gray. Once Tom is found guilty, Spencer will reveal the setup and so humiliate the district attorney. Tom agrees to the plan, but Spencer dies in a car accident that also destroys the photographic evidence intended to reveal the truth at Tom’s trial, and Tom is found guilty and placed on death row. Complications follow before the true facts emerge.

Response to this, Lang’s final Hollywood film, has always been mixed. The New York Times, while pointing out the implausibilities of the plot and its “arrant disregard” of “the technicalities of the law”, yet judged it “a fairly intriguing and brain-teasing mystery film”, with a “noxiously alluring nightclub atmosphere”, and Joan Fontaine as “a lovely, loyal sweetheart”, plus good direction by Lang. A less sympathetic verdict sees it as a swansong for a director whose career had steadily declined since his initial American film, Fury, ending appropriately with a studio, RKO, which was also in decline and had abandoned production three years earlier and was now reduced to releasing outside product.

The internet reviewer Dennis Schwartz, while admitting that the film is “Cheerlessly written with many plot holes, implausible contrivances and legal absurdities by law school graduate Douglas Morrow”, nevertheless found it “a low-budget twisty courtroom drama about the dangers of capital punishment that ends up being about something more intangible–the unpredictability of fate” [a favourite theme of Lang]. “…in this subversive film a perverse atmosphere of subliminal uncertainty prevails over the established surface reality, and the surprise ending comes as more of an emotional shock than as a real surprise–allowing the filmmaker to pass on his cynicism and disillusionment over the human condition. The stark, alluring and unconventional film is worth seeing for the ingenious way it resolves the brain-teasing dilemma it raised.”

Born Carver Dana Andrews on a farmstead in Mississippi, his family moved to Texas where he attended Sam Houston State University and then, hoping to find work as an actor he moved to California, where he studied theatre and acting at the Pasadena Playhouse, and became an acclaimed member of the company, attracting the attention of Samuel Goldwyn, who offered him a movie contract. His first film role was in The Westerner (1940) and this led to his finest period as an actor in the following decade with Ball of Fire (1941–as a gangster), The Oxbow Incident (1943–as a lynching victim), Laura (1944–as an obsessed detective), The Best Years of Our Life (1946–as an air force veteran) and State Fair (1945–as a singer in a musical in which he starred with Jeanne Craine). His career began to stall in 1950s as a result of his alcoholism, and, after Where the Sidewalk Ends in 1950 he moved more into B-movies, though he had success in Fritz Lang’s While the City Sleeps (1956) and Beyond a Reasonable Doubt (1957) and Jacques Tourneur’s Night of the Demon (1957). His later work was mostly in radio, after he had brought his alcoholism under control, and he died from heart failure in 1992 at the age of 83.

Born Joan de Beauvoir de Havilland in Tokyo to British parents who separated in 1919, after which her mother, a stage actress, took Joan and her older sister Olivia to the United States., where they settled in California. Joan returned to live with her father in Japan when she was sixteen and then retuned to the US in 1935, where she made her stage debut (taking the professional name of Joan Fontaine) and was soon signed by RKO. After appearing in some minor roles, she became touted as a rising star, appearing with Fred Astaire in A Damsel in Distress in 1937; but when the film flopped she was reduced to minor roles once more and her contract was not renewed. After meeting producer David O. Selznick in 1940 and discovering that they were both interested in Daphne du Maurier’s novel Rebecca, Selznick asked her to audition for the leading role in his planned film of the book, to be directed by Alfred Hitchcock, and, after competing with hundreds of other actresses, she secured the role. The film received glowing reviews and she was nominated for an Academy Award for Best Actress; though she did not win that year, she won for Best Actress in 1942 for Hitchcock’s Suspicion.

Her award served to accentuate the budding rivalry (dating apparently from their childhood) between her and her actress sister Olivia de Havilland, who had been nominated the same year for her role in Hold Back the Dawn, when Fontaine apparently deliberately slighted de Havilland when her sister attempted to congratulate her on winning the award. This apparently inaugurated a lifelong feud that lasted till 1975 and later resulted in mutual accusations  concerning medical treatment of their ailing mother.

Meanwhile Fontaine’s career flourished in such films as The Constant Nymph (1943), Jane Eyre (1943) and Letter From an Unknown Woman (1948). She turned more to radio, television and the stage in the 1950s, winning some acclaim for stage productions in particular, before retiring in 1994. She was married and divorced four times, including to actor Brian Aherne from 1939 to 1945.