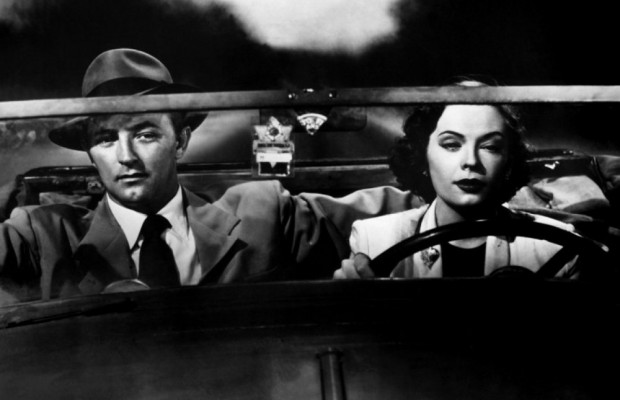 Toronto Film Society presented The Big Steal on Monday, November 4, 2013 in a double bill with All Through the Night, as part of the Season 66 Monday Night Film Buff Series, Programme 2.

Robert Mitchum had just served sixty days in jail for marijuana possession when he began work on THE BIG STEAL and it was this news flash and not his current film project, that

made front page news in 1949.  For an actor busted on a drug charge in 1940s Hollywood it usually meant the ruin of a career but not Mitchum.  The notorious publicity only enhanced his Bad Boy reputation and he would continue to find work with some of the most prestigious directors in the movie business, despite his sometimes raucous off screen behaviour.

THE BIG STEAL was one of Don Siegel’s first directorial efforts and it stands as a good preview of what was to become his specialty in the fifties–taut little B-movie thrillers and melodramas like INVASION OF THE BODY SNATCHERS (1956) BABY FACE NELSON (1957), and THE LINEUP (1958).  While the plot of THE BIG STEAL was fairly derivative of numerous other chase thrillers–an army lieutenant and his female companion race across Mexico in pursuit of a man who stole a $300,000 army payroll–it was the re-teaming of Mtichum and Jane Greer, his co-star from the film noir classic, OUT OF THE PAST (1947), and Siegel’s breathless direction that elevated this melodrama above the standard B-movie.

Just as the film is one elaborate chase, the production on it was just as rushed.  RKO studio owner Howard Hughes wanted to capitalize on Mitchum’s current popularity in such films as

RACHEL AND THE STRANGER (1948) and urged Siegel to complete the film before Mitchum’s court sentencing for the marijuana incident in Santa Monica.  After Lizabeth Scott was ruled out as the female lead in THE BIG STEAL (Hal Wallis, who owned her contract, thought appearing opposite Mitchum would affect her career adversely), other actresses like Joan Bennett were considered until producer Sid Rogell got the bright idea of casting Jane Greer.  Even though the actress had recently ended her romantic relationship with Hughes, the studio owner grudgingly approved her for the part in the interest of speeding along the production.

And so production began in earnest and Siegel was actually able to complete the interior sequences on the RKO backlot.  The scenes set

in Mexico were a different matter.  Mitchum had to cancel filming there as soon as he was sentenced (the first verdict of one year in jail was reduced to sixty days in the clink with two years probation) so Siegel was forced to shoot around him until his release.  The delay was crucial because Jane Greer was now noticeably pregnant and Mitchum, who had lost about twenty pounds in prison through an extensive exercise routine, was visibly trimmer than in his pre-jail scenes.

And there were other problems according to Don Siegel in his autobiography, A Siegel Film (Faber and Faber): “When Mitchum showed up on location in Tehuacan in Mexico with his

probation officer, he had finished a bottle of tequila in the car from Mexico City.  The probation officer was drunker than Mitchum.  He passed out in his room.  (Co-star) Pat Knowles and I made our first major mistake: we tried to sober up Mitchum…He was one tough hombre with a mean streak that we couldn’t handle.”  Nevertheless, Siegel had a deadline to make and quickly learned how to work with his complicated actor: “Mitchum took pride in the fact that he never studied his lines.  After rehearsals, he would be letter perfect.  No matter who he was working with, he would play the scene without much vitality and generally in a low voice.  This made the actor he was playing opposite appear to be overacting.  Whenever I arrived in the morning with rewritten pages, Mitchum would have a certain amount of trouble memorizing the new lines.  The attitude of not caring was a pretense.  I was also aware that he was a talented actor with a most original style….By the time Mitchum got out of jail, I had already shot the chase material with Pat(ric) Knowles, Bill Bendix and Ramon Novarro.  At that time, the trees were bare.  When Mitchum joined us and drove madly with Jane Greer after Knowles, the trees and flowers were in full bloom.  No one at RKO ever noticed anything amiss.  In fairness to the critics, there wasn’t enough time to notice anything.  Also, Jane Greer was four months pregnant.  With a little care in how I shot her, no one was aware; but I must confess that at times, I worried about a miscarriage.”

Don Siegel, who would become one of the best action directors in Hollywood history, worked all the pressure points in THE BIG STEAL, one of his early efforts based on Richard

Wormser’s story and Geoffrey Homes-Gerald Drayson Adams screenplay.  All about an extended chase through Mexico (where filming took place), it had Jane Greer and Robert Mitchum pursuing Patric Knowles and being dogged, in turn, by William Bendix (borrowed from Hal Roach Studios).  The goal is a $3000,000 Army payroll pilfered from Mitchum by Knowles.  Although the story contained more potholes than the primitive roads over which the characters travel, Siegel maintained such a full head of steam that audiences were never bothered by the confusions.  Indeed, most viewers were draped limply in their seats by the time it was over, thanks to the pulsating energy of this first-rate thriller.  Jack J. Gross produced for the Sid Rogell unit, giving secondary roles to Ramon Novarro, Don Alvarado, John Qualen and Pascual Garcia Pena.