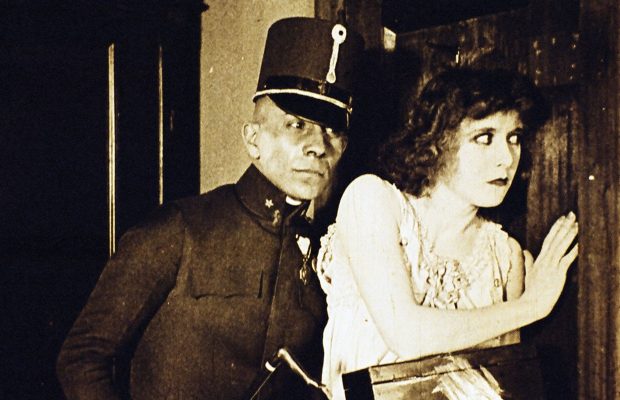 Crainquebille (France 1922).  Based on The Majesty of Justice by Anatole France.  Directed by Jacques Feyder.  Starring Maurice Feraudy of the Comedie Francaise.  Release by Paramount in the U.S.A. as Bill.

Bardeche and Brasillach in History of the Film say: Still of interest tow today.  (Certain trick effects) were done with great technical ingenuity, which Feyder was seldom to use in the future and which somewhat obscured his real gifts, for what gave Crainquebille its abiding merit was that here for the first time was an attempt to bare the mysteries of a human soul.  From Anatole France’s mocking tale Feyder made a patient, almost heavy film in which he tried to express a psychological truth.  He is one of the few who later developed fairly complex characters on the screen, and by purely pictorial means gave life to a pessimistic but accurate study of human nature.  In Crainquebille it was realized with some surprise that Feyder without sacrificing his skill had evinced definite originality, and an originality which sprang from within.

Paul Rotha opined: The style of Feyder, a Belgian, appears to change with each of his interesting productions,  Naturally assimilative–he has adapted from the Germans and from the Swedes, but he has always adapted correctly and with sincerity.

Roger Manvell in Experiment in the Film was less impressed: I have not included Feyder in the avant-garde, though he briefly turned in its direction.  His efforts to swim with the current, as in Crainquebille, appeared heavy and laborious.  Later he realized his talent lay elsewhere.  (e.g. La Kermesse Heroique)

In 1919, after successfully playing villainous Huns in other men’s films, von Stroheim convinced Carl Laemmle that an original story of his would make a successful film if he were allowed full control over its production.  Blind Husbands was released over the protests of Laemmle’s advisers, yet made money.  In a full-page ad in Photoplay Mr. Laemmle, perhaps a little fulsomely, said: “In all my years as a producer of the best photoplays the art has created, I have not known more deilghtful entertainment than this amazingly artistic drama, written and directed to the uttermost detail by Erich von Stroheim”.  Though hardly the best, this is perhaps the only Stroheim film not tampered with by his employers.  Foolish Wives, Greed and The Wedding March were released in greatly cut versions; Merry-Go-Round and Walking Down Broadway completed or re-made by other directors: Queen Kelly never publicly shown; and The Merry Widow, said von, was “a horse opera–made so that my family need not starve”.  Most film authorities blame Hollywood for Stroheim’s troubles and consider him a misunderstood genius; others, like Paul Rotha, feel his own “Temperament, intransigence and extravagance” were at fault.  As an actor he was widely advertised as “The Man You Love to Hate”, which phrase seems to be borne out by Bardeche and Brasillach: “Blind Husbands, The Devil’s Pass-key and Foolish Wives were timely and of high quality–promulgating the post-war belief that women have a right to love after marriage and that, if husbands are indifferent, they cannot blame their wives for seeking attention elsewhere.  Common as the theme was, the treatment was far from common.  Unlike other triangle stories it was not in the pulp fashion; it was penetrating and serious, and distinguished in its realistic detail and vivid characterizations”.  Herman G. Weinberg calls it “The first American film with a sophisticated approach to sex”.

Roger Manvell relates: “Blind Husbands was shown in 1926 at a French Cine-Club and discussion followed.  Edmond Greville expressed admiration at Stroheim ending his film with the death of the hero, a Prussian officer, the only fate he deserved.  A man rose declaring he was an officer in the French Army and Greville had insulted the Army.  Other gentlemen revealed themselves as officers no less determined to defend the honor of the Prussian Army and they surrounded the ‘insulter’.  A brawl ensued, and on going to the rescue of Greville I was felled by a blow on the head from a gallant French Captain who assailed me from behind with a walking-stick”.  The Silent Film Series trusts there will be no such occurrences tonight.