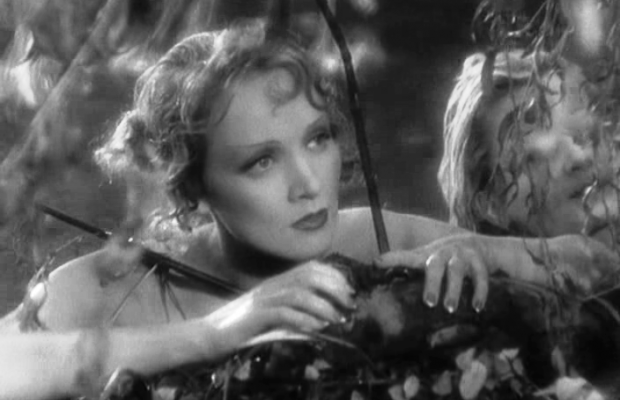 Toronto Film Society presented Blonde Venus on Saturday, May 11, 2013 as part of Season 66 May Festival: The Pre-Code Weekend.

How do you not include Marlene Dietrich and a von Sternberg collaboration in a pre-Code weekend?  If by chance you haven’t seen it, then you’ll be delighted when you see a most unusual moment in nightclub entertainment.  If you have seen it, well, it’s always wonderful to see it again.

There is a kidnapping element to the story which was inspired by contemporary news.  In March 1932, the infant son of aviator Charles Lindbergh had been kidnapped and murdered.  Throughout America, wealthy and famous parents panicked and locksmiths, bodyguards and providers of security gates were kept busy round the clock in Hollywood.  Dietrich supervised the installation of iron bars over the windows of her daughter Maria’s room.  Dietrich’s chauffeur, an austere ex-prizefighter named Briggs, escorted Maria to school.  She was not even allowed to wander in her own enclosed yard without supervision.  In mid-May, extortion letters were received by Dietrich and she involved the police.  In the end, happily nothing came of the threats.

One other quick item of interest.  There was much friction over the screenplay between von Sternberg and Dietrich on one side and Paramount production chief, Ben Schulberg on the other.  Von Sternberg was told he would have to tone down the episodes of the woman’s unsympathetic descent into prostitution and depravity, which he refused to do and instead departed for a New York holiday after Schulberg brought in the writer S.K. Lauren.  Von Sternberg was then suspended when he failed to report for the first day’s shooting.  However, Marlene, in deference to von Sternberg, was also absent that day and announced that she would certainly not appear in the film with the newly assigned director, Richard Wallace.  The studio felt they had to suspend her as well.  Eventually, after much threats of lawsuits and some script compromises which were hastily drafted, shooting began on May 26th.

And Herbert Marshall gets to play another cuckolded husband.

A disappointer, Dietrich and a corking box office title will carry ‘The Blonde Venus,’ but it’ll require plenty of bally.  It’s a picture that lends itself easily to selling but it won’t help the German star in the final analysis.  Not that she doesn’t acquit herself to a degree far in excess of the inept story accorded her, but it’s not going to help her by any manner of means.  No getting away from the Shakespearean nifty that a star is only as good as her story.

Much of the blame is to be laid at Von Sternberg’s doorstep.  In a desire to glamorously build up Dietrich he sloughed almost every other element that goes to round out a box office production.  He devoted two reels for a celluloid transition to indicate her flight from her husband and all the drab details that went with it, as she scrammed from Baltimore to Washington to Nashville to Chattanooga to Savannah to New Orleans, etc., etc.  The police reports her hunt sounded like a railroad time-table.

Then in a meteoric rise, with no details whatsoever, she’s suddenly again the queen of the nite clubs, this time in Paris, where Cary Grant (who had formerly maintained her) once again meets up with her.  In this and previous nite club scenes, Miss Dietrich sings two numbers in that deep, throaty manner of hers, one chorus being in French.  Tunes have a chance to click popularly, which may react in the film’s favor.

Herbert Marshall on his screen debut under Par auspices is sadly miscast as the radium-poisoned husband who needs funds so badly for a European cure that his devoted wife takes resource to financial succor from such remote source as the influential politician (Grant).  Marshall’s precise Oxford diction certainly didn’t jibe with the ambitious American whose research into chemical formula spells his physical undoing by radium poisoning.

The 92 minutes, despite their episodic and ofttimes ragged sequences, were much too much considering the triteness of the basic story, a theme of mother love of the German-American café songstress whose child (well played by Dickie Moore, in perhaps the only convincing casting) is the sympathetic basis of it all.  Otherwise there’s little sympathy for any of the characters; neither the hapless husband, the faithless wife nor the other man.

Von Sternberg has again gone in bullishly for the lap-dissolve stuff, playing scene upon scene, and with needless detail.  There’s beaucoup footage wasted on showing choo-chooing railroad trains, outgoing steamers, incoming steamers (twice there are shots of the New York skyline from the harbor, an extraneous detail in both instances), and with it all a needless application to detail which so obviously handicaps the rest of it, one wonders at the wherefore and why fore of it all.  This is the film over which B.P. Schulberg and Von Sternberg had a row during production.  The celluloid product lends substance to Schulberg’s cause for complaint.

‘Venus’ is said to have undergone considerable take and retake, with the final prints airmailed from the Coast for the Par opening after having been previously scheduled and postponed.  As completed it can stand plenty of chopping to speed up a sluggish procedure.

Marlene Dietrich’s latest film, “Blonde Venus,” over which B.P. Schulberg, until recently head of Paramount’s Hollywood studio, and Josef von Sternberg, the director, clashed last Spring, is a muddled, unimaginative and generally hapless piece of work, relieved somewhat by the talent and charm of the German actress and Herbert Marshall’s valiant work in a thankless role.

It wanders from Germany to many places in America, over to France and back to New York, but nary a whit of drama is there in it.  There is good photography, and for those who are partial to scenes in a theatre, there are some over which Mr. von Sternberg has taken no little care.  But the pain of it is the dismal and suspenseless tale of a woman who sinks to selling her favors and finally ends by returning to her husband.

There is scarcely any sympathy evoked for the characters, except for a little boy.  Most of the scenes are unedifying, without possessing any strength or a common sense idea of psychology.  It is regrettable that Miss Dietrich, Mr. Marshall and others should have been called upon to appear in such a vehicle.

When there is any attempt at levity it is silly, and one lengthy episode might better have been left to the imagination, for it never for a moment is anything but dreary and dull.  Miss Dietrich appears as Helen, a stage performer in Berlin, who becomes the wife of Ned Faraday, an American student in Germany.  Several years afterward Ned decides that he has radium poisoning, and just when he has given up hope of having more than eight months to live he learns of a European specialist who will probably be able to cure him.  The treatment, it is set forth, will cost $1,500.

Helen, appreciating that her husband has not even enough money to go abroad, succeeds in finding employment on the stage in New York and she also meets Nick Townsend, a wealthy young man, who gives her a check for $300, which she turns over to Ned, telling him that it is an advance on her salary.

Ned leaves his wife and child and goes to Europe and during his long absence, Townsend and Helen enjoy a friendship that is scarcely platonic.

When Ned returns unexpectedly and hears of his wife’s faithlessness, he insists that she turn their youngster over to him.  Helen flees with her little boy, dodging the police in several cities, until even she finally realizes that she is selfish in keeping the child, so she permits him to go to his father, who returns to Helen the $1,500 she had given to him for his medical treatment.  After that it looks as though Helen had sought a watery grave, but, very abruptly, she is next heard from as a stellar performer in a Paris theatre.

She returns to New York with Townsend, whom she meets in Paris, and later there is once again that tried and trusted idea of the mother going to see her child and finally being welcomed back by her husband, probably much to the disappointment of Townsend.

There are good portraits of Miss Dietrich, who sings two or three songs.  Mr. Marshall does as well as his lines and the situations permit.  Cary Grant is worthy of a much better role than that of Townsend, and little Dickie Moore gives a suggestion of brightness to the unhealthy scenes in which he is sometimes beheld.

Rubinoff conducts the Paramount orchestra, and on the stage is Boris Petroff’s production, “Looking Backward,” with Ray Bolger, John and Edna Torrence and the Hall Johnson Choir.