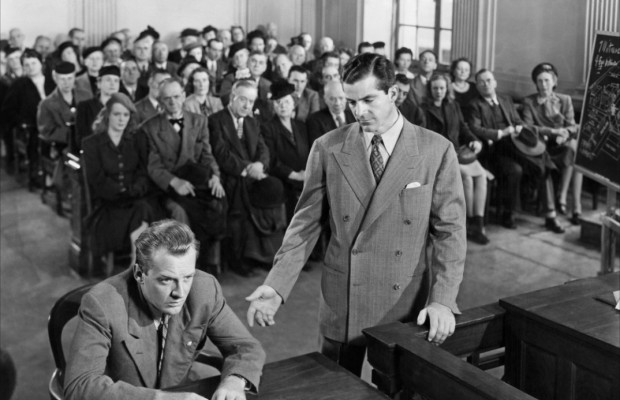 World War Two had a profound effect on American society, and, by extension, Hollywood, the sometimes flawed mirror of that society.  The war had a maturing effect on Americans, and one of the outgrowths of this was a demand for more sophisticated film fare.  Thus was born the ‘semi-documentary’ film, the most dramatic innovation in post-war movies.

A semi-documentary is a film, basically, which utilizes actors to tell a true story filmed in its actual location, and with an off-screen narrator outlining the scenario.  Boomerang is just such a picture.

The postwar cycle of semi-documentaries was launched in 1945 by 20th Century-Fox’s The House on 92nd Street, about an FBI search fo Nazi spies.  The producer was Louis de Rochemont, who had produced the famous “March of Time” newsreel documentaries for Time, Inc., during the 1930s.  Interestingly enough, Warner Brothers had released their own semi-documentary, also about spies, in 1939, Confessions of a Nazi Spy.  However, the technique did not catch on, to any extent, and Hollywood remained largely studio-bound.

The public took eagerly to House on 92nd Street, and 20th, with the dynamic Darryl F. Zanuck at the helm, embraced the semi-documentary with open arms.  The death-knell was sounded for distracting, artificial studio “exteriors”.  Location shooting gave a tremendous lift to films, giving a feeling of “being there” for the audience which no backlot or process screen ever could.  It is rather ironic that Boomerang should be the work of Elia Kazan since, before making his motion picture debut in 1945 with A Tree Grows in Brooklyn, he had won acclaim as a Broadway director.  However, Kazan had just gone through a demoralizing experience on MGM’s Sea of Grass–a Western with no actual location shooting!

Boomerang is the true story of the murder of a beloved clergyman in Bridgeport, Connecticut.  When 20th Century-Fox requested permission of the town council to film in the community, the politicians, afraid of reviving unpleasant memories, declined.  Fortunately neighboring Stamford was only too happy to oblige.

In casting the film, Kazan filled many of the bit parts with local non-professionals, including his uncle, Joe Kazan.  Some of the police in the film were real-life Stamford police officers.

The leading character in the story is the local district attorney who, in real life, went on to become U.S. Attorney-General.  The stalwart Dana Andrews, with his commanding prescence and clear, assertive voice, gives an effective performance.  The warm and demure Jane Wyatt, whose screen appearances were all too rare, is sincere and supportive as Andrews’ wife.

The semi-documentary technique worked particularly well with Boomerang, with the camera probing into actual offices, courtrooms, police stations.  Of equal importance, it captured the feeling of life in a small American city in the 1940s, and recorded it for posterity.  It is rather sad, looking at pictures such as Boomerang, to realize how much finer so many things were in the 1940s than at any later date.