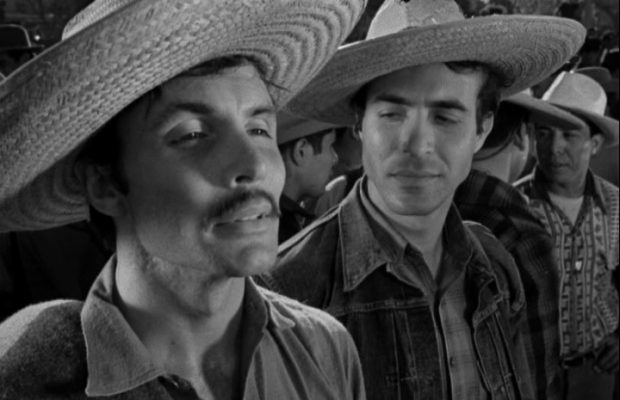 The Bracero Program (named for the Spanish term bracero, meaning “manual laborer” or “one who works using his arms”) was a series of laws and diplomatic agreements, initiated on August 4, 1942, when the United States signed the Mexican Farm Labor Agreement with Mexico.

However, the focus of Border Incident is not the migrant workers, but the undercover agents, working on behalf of Mexican-U.S. government agencies, to protect the exploited braceros.

Max Alvarez wrote the following in his book, The Crime Films of Anthony Mann.  The United States had guaranteed Mexico that it would not draft Mexican nationals into military service or subject them to discriminatory policies, but also ensure that California work locations obeyed Mexican labour standards.  A work contract was drawn up for prospective U.S. employers stipulating braceros be provided hygienic lodgings, risk insurance, sick pay, higher wages for specialized tasks, tools, affordable meals or a daily subsistence allowance, adequately heated living quarters and other provisions.  The braceros would be able to elect their own representatives and receive protection under U.S. laws.  For those able to read, the contract held great promise.  Yet as a bracero later remarked to a government investigator, “Some of us have read the contract but it cannot be mentioned to the boss.  The contractor laughed and he said, ‘The contract is a filth of a paper.’”

As ranchers and agriculturalists profited from and became dependent upon Mexican labour, they successfully lobbied the United States Congress to extend the bracero program.  At the time Border Incident was being prepared in 1948, there were 5,000 Mexican immigrant labourers living in thirty camps in California.  The LA Times reported that “untrained” braceros were earning 65 cents an hour while experience orange pickers $50 to $75 a week.

In reality, Mexican immigrant workers under the Bracero Program were no better off than those working illegally in the U.S.  This matter was made clear on January 28, 1948, one year before Border Incident began filming, when a chartered DC-3 plane of the United States Immigration Service crashed and burned in California, killing 28 braceros, three crew members and an immigration guard.  The Mexican causalities included documented labourers returning home as well as undocumented workers the INS were deporting.  It is symbolic that the US newspaper reports of the accident only published the name of the four U.S. victims.  The radical folk singer Woody Guthrie memorialized the plane crash in his protest poem “Plane Wreck at Los Gatos”.

In 1949, at the time Border Incident was in postproduction, Latino newspapers in California were equating the Bracero Program with modern slavery and reporting inhumane exploitation of workers.  In his 1956 U.S. government report, Ernesto Galarza provided exploitative treatment of braceros in the years immediately following the release of Anthony Mann’s thriller.  Mexican nationals spoke openly of grim and costly housing conditions, continuous contractual violations, extortionate charges for food and lodging, transportation safety hazards and discriminatory wage policies.

The viewing of this film sounds timely, given the political climate in the States.

This film has an unusual plot line—the smuggling of Mexican peasants into the United States to provide cheap farm labour.  The only other picture with a similar theme, that comes to mind, is 1982’s The Border, starring Jack Nicholson.

The real-life problem of impoverished Mexicans trying to make their way into the United States to find work is decades old, and persists to this day.  Far more of them have wanted to enter the country than the American government has ever been willing to allow.  However, many of those who have made it across have been exploited by landowners for backbreaking jobs that Americans refuse to take.  By the way, the derisive term “wetback”, as applied to the desperate Mexicans, refers to their one-time habit of riding across the border in the water tenders of steam locomotives.

Border Incident revolves around the alien smuggling network operated by rancher Howard da Silva.  This operation, though, involves murdering the Mexicans for their wages as they attempt to return to their families.  Enter the US Border Patrol, in the person of investigator George Murphy, and Ricardo Montalban, representing the Mexican government.  Montalban decides to infiltrate da Silva’s operation by posing as a “wetback”.

The film was shot on location in California’s Imperial Valley, near the border.  Director Anthony Mann had been invited to mighty MGM after helming a series of distinctive B-films, mainly crime stories, dating back to 1942s; Dr. Broadway (shown by TFS on December 6, 1998).  His career spanned 25 years, ended by a fatal heart attack in 1967 during the filming of A Dandy in Aspic.  Mann, generally speaking, concentrated throughout his career on outdoor and action films.  Following a fling with film-noir in the post-war era, he formed a creative partnership with actor James Stewart, which mainly involved westerns such as 1950’s Winchester 73, but also embraced contemporary dramas; for example, 1954’s Strategic Air Command.

In the process, Mann broadened the image of Stewart, especially in the westerns.  The genial “aw, shucks” man of such films as The Philadelphia Story and Harvey became, under Mann’s direction, a complex, tormented, and frequently ruthless and vicious character.  In fact, some of the roles portrayed by Stewart in Mann’s westerns could be said to border on the psychopathic.  Another characteristic of Mann’s films was, for the time, shocking and brutal violence; a particularly harrowing example awaits you, gentle viewer, in Border Incident.  His films also displayed a rich pictorial sense, in both striking black and white and glowing Technicolor.