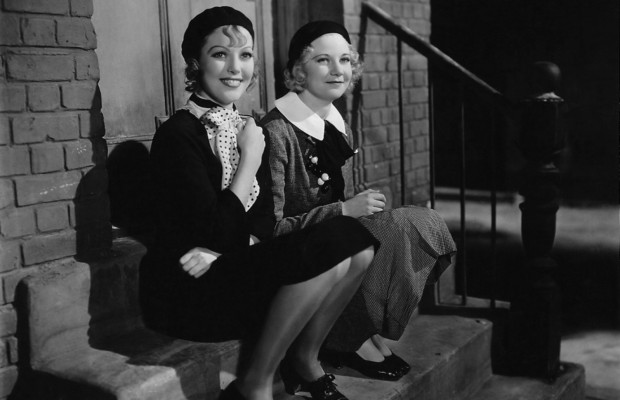 Toronto Film Society presented Born to Be Bad on Saturday, May 11, 2013 as part of Season 66 May Festival: The Pre-Code Weekend.

Loretta Young was always a great beauty, but never more so than in the early thirties.  Seeing her in pre-Code films, and we happily get a glimpse of her in two this weekend, really changes one’s image of her glamour.  What’s interesting about this film in particular is the Depression’s view of a single young mother and her pre-adolescent son.  Also starring is the very young Cary Grant, who is also in three of our other films playing this weekend.  These films are before Cary Grant became The Cary Grant.  This was also the second to last film Lowell Sherman directed just before his untimely death.

This story is so bad in completed picture form, it’s hard to see how it was thought to contain enough merit to warrant production in the first place.  From the director, Lowell Sherman, to one of the co-stars, Loretta Young, and including the producers, a lot of first rate effort went into the making; but all wasted.

Unnatural mother love, delinquent juvenile behaviour and strange adult thinking are the elements that serve both to make and ruin the plot.  It is trash writing and the dialog added to it is hardly better.

A 15-year-old unwed mother has a baby boy, and she brings him up in such a way that, in her opinion, he will be fortified against the grief she has gone through.  The boy under her guidance becomes a sneak-thief, and a rowdy.  The mother countenances all his antics, meanwhile going about her own shady activities.

The rich man enters the picture.  He’s the kind of a rich man who owns a stupendous dairy business and drives a truck himself now and then ‘just to keep in touch with all departments of my business.’  While truck driving one day he runs over the kid.  The kid’s mother tries to frame a big settlement, but is exposed in court.  Anyway, the rich man adopts the boy.  Then the mother goes on the make for the rich man, gets him in spite of his very nice but too generous and unreal wife—but at the finish the mother-on-the-make realizes her mistake, repents, and scrams.

Loretta Young looks better than ever, but the story gave her too much of a handicap to do anything but look well.  Her performance might be called satisfactory under the circumstances, but the same doesn’t apply to Cary Grant.  He gives a colorless, meaningless performance.  Jackie Kelk, seemingly about seven or eight years old, must be a clever kid to be able to become so dislikeable before the picture is five minutes old, as he does here.  Balance of cast, as well as the production and Lowell Sherman’s deft but wasted directing, all much too good for the script.

The last film made by the distinguished actor-director Lowell Sherman (he died shortly afterwards, having established himself as one of the better and more sophisticated directors of the early 30’s), “Born to Be Bad” suffered from the increasingly rigorous application of the new rulings set down by the Production Code.  It was heavily cut and re-shaped on its completion, hence its surprisingly short running time of only 61 minutes.  Solidly produced, its main interest obviously is in the playing of Cary Grant and Loretta Young.  The child who is the object of all the marital bickering frankly seems like a selfish brat who really isn’t worth all the fuss, but it really isn’t his fault that the script saddles him with situations where the audience (let alone a depression-era audience) is expected to sympathize with him because he isn’t going to get the pony he has just been promised!  There are some quite gutsy elements to the plot, and the climax is quite surprising, but its relation to reality is virtually nil.

BORN TO BE BAD, from a story by Ralph Graves; directed by Lowell Sherman; a Twentieth Century production; released by United Artists.

Ralph Graves, who has given several fairly interesting performances in motion pictures, is responsible for the narrative of “Born to Be Bad,” the new occupant of the Rivoli screen.  If this opus is any criterion of Mr. Graves’s literary skill, he is scarcely to be congratulated on having temporarily abandoned his acting.  It is a hopelessly unintelligent hodgepodge, wherein Loretta Young and Cary Grant have the misfortune to be cast in the leading roles.

The story concerns Letty Strong (Miss Young), a callous, unwed mother, whose enfant terrible, Mickey, is adopted by Malcolm Trevor, a wealthy married business man.  As Mickey is a slangy, unattractive boy, who is given to roller skating in the house, and, when it serves his purpose, stealing anything that looks valuable, it does seem strange that Mr. and Mrs. Trevor should take an interest in the youngster.  But Letty, whose vocabulary reflects her hardened personality, is good-looking, which fact has a great deal to do with this inept bundle of hysteria and implausibility.