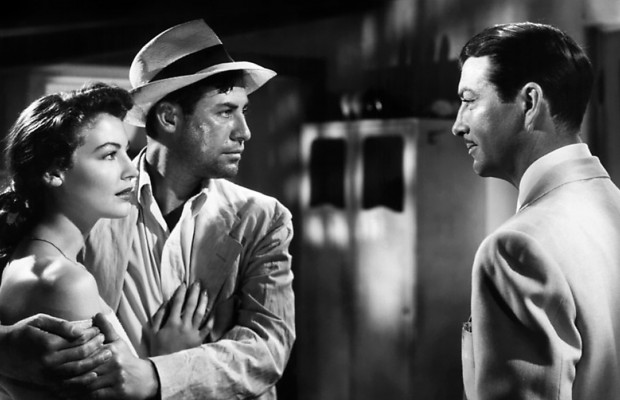 Toronto Film Society presented The Bribe on Sunday, May 13, 2012 as part of Season 65 May Festival: The Dead Men Don’t Wear Plaid Weekend.

“The Bribe” is pretty standard melodramatic filmfare.  It gets its chief importance from a rather hefty lineup of star names and can be figured for a moderately good account of itself at the boxoffice.  Theme of love versus duty is exploitable; the tropical locale interesting and the plot angle of war-surplus racketeering timely enough, all of which will help its chances.

A lot of the effectiveness of its meller punch is lost by the flashback treatment.  Technique takes the edge off development and gives too early a tipoff to the plot.  Use of narration doesn’t

brighten it, either, since it has been done too often of late in cops-robbers pictures.

Robert Z. Leonard’s direction does a good pacing job on the story and keeps its action hard and brittle.  Film concerns Robet Taylor, as a Federal cop dispatched to a South American island to break up a war-surplus racket.  When his investigation leads him to a beautiful femme (Ava Gardner), the love-duty conflict crops up as he’s torn between making his arrests or delaying action long enough for the racket boys to escape.  Windup has both love and duty winning in a not unexpected finale.

Outside of Taylor, Miss Gardner and Charles Laughton, as the gang’s contactman, the roles are of minor importance and waste star values of Vincent Price and John Hodiak.  What footage there is for the latter two is excellently done.  Price is the leader of the surplus racket and Hodiak is a grounded flier who’s selling his mechanical talents to the gang to get money to leave the tropics with his wife, Miss Gardner.

Taylor does good work as the Fed who lets a yen for Miss Gardner temporarily muddle hs job of spying.  Miss Gardner decorates her assignment of café singer who gets Taylor when Hodiak is knocked off.  She effectively chirps one Naclo Herb Brown-William Katz tune, “Situation Wanted.”  Laughton has the meatiest role and socks it home.  He’s a broken-down beachcomber type with aching feet, sly and sleazy, with a slightly humorous shading.  Good support comes from Samuel S. Hinds, John Hoyt, Tito Renaldo and Martin Garralaga.

Dialog in the Marguerite Roberts script, based on the story by Frederick Nebel, has an occasional crackle to sharpen the thriller situations.  Production backing by Pandro S. Berman permeates footage with feeling of tropical heat for authentic touch and lensing.

THE BRIBE, screen play by Marguerite Roberts, based on a short story by Frederick Nebel; directed by Robert Z. Leonard; produced by Pandro S. Berman for Metro-Goldwyn-Mayer.  At the Capitol.

If you plan to put down your money to see the Capitol’s “The Bribe,” we suggest that you be prepared to write off this extravagance as a folly and nothing more. For “The Bribe” is the sort of temptation which Hollywood put in the way of gullible moviegoers about twenty years ago. It’s a piece of pure romantic fiction, as lurid as it is absurd. And if it didn’t have several big “names” in it, it would be low-man on a “grind house” triple-bill.

Consider the outline of its contents: an American secret-service man arrives in a Caribbean island to get the goods on a smuggling gang. There he runs into a beautiful singer in a local

honky-tonk, her rum-sotted, ex-Air Forces husband and a couple of shady characters. Putting the pieces together, he discovers that they’re all in the gang. But he’s fallen in love with the singer. Does he do his duty or does he take the bribe? (If anybody here can’t imagine what the bribe is, we’ll tell you after school.)

That’s the story. And, no fooling, it is played just as lushly as it sounds, without one little wink at the audience or the slightest protrusion of tongue in cheek. Robert Taylor goes grimly through the paces of Rigby, the secret-service man, who seems to be as lacking in humor as he is in resistance to charms. And Ava Gardner performs the sultry siren with her hips draped in nobility.

Here and there in the proceedings, John Hodiak maunders and expires as the fate-tortured ex-Air Forces fellow, Vincent Price leers with diabolic glee and Charles Laughton simpers and fidgets as a scummy “fixer” who has considerable trouble with sore feet.

The only hint which the director, Robert Z. Leonard, gives that he may have meant it all as pure nonsense comes at the very end, when he blows up the place with pyrotechnics. That’s the one appropriate move in the whole show.