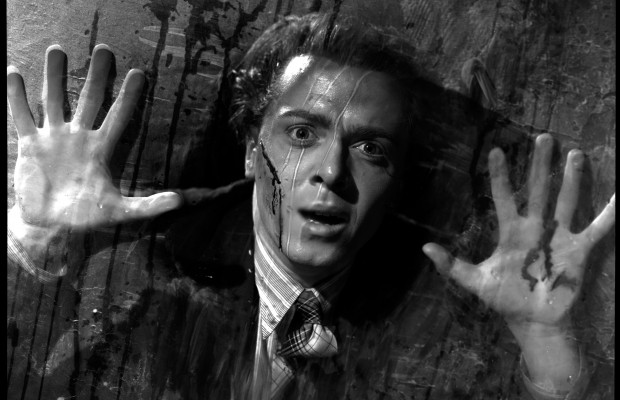 Although only Greene’s lighter fiction had been filmed prior to 1947, in that year films were made of no less than three of his serious novels: The Man Within, The Power and the Glory (under the title The Fugivite), and Brighton Rock.  The producers of The Man Within, Muriel and Sydney Box, did their own screenplay; John Ford, the director of The Fugitive, had one of his favourite scriptwriters, Dudley Nichols, adapt The Power and the Glory; and director Anthony Asquith asked playwright Terence Rattigan, with whom he had worked before, to adapt Brighton Rock.  But Asquith and Rattigan, along with their producer, Anatole de Grunewald, were not able to get the film into production.  When John and Roy Boulting discovered this, they acquired the rights to thenovel and asked Greene himself to do the screenplay….

Brighton Rock would cause any screenwriter difficulties since it is a melodramatic story with a theme that is deely religious, and this combination is a difficult one to make work in a film.  Greene had originally planned the novel as a detective story, but the first fifty pages are all that remain of that idea, he says in his introduction to Brighton Rock, because the novel began to take on more and more of a religious dimension as he wrote it.

“The script of Brighton Rock I am ready to defend,” says Greene.  “There were good scenes, but the Boulting Brothers were too generous in giving an apprentice his rope.”  John and Roy Boulting work together on all their films, with one producing and the other directing.  In the case of Brighton Rock, Roy acted as producer and John directed.  John Boulting remembers that he and his brother had moments of anxiety about whether or not film audiences would accept the religious elements of Brighton Rock on the screen: “But religion is a built-in part of Graham’s work; it is the ingredient that makes his fiction special and unique.  So in the end we decided that it would be a challenge to present this complex novel on the screen the way that Graham had envisioned it.”

In due course, Greene submitted the script for Brighton Rock to the chairman of the Board of Censors, Brook Wilkinson, who made objections that Greene considered absurd.  “The script was slashed to pieces,” says Greene.  “The whole film was weakened by the censor’s well-meaning agnostic care for the belief of others.”  The censor refused to let Pinkie quote any parts of the Mass, for instance, because he was a murderer, and it was thought that this would offend Roman Catholics.

A preface was added to the beginning of the film which states that the story is set between the wars, when there were gangsters at Brighton but that this Brighton is happily no more.  When I inquired if this preface was the censor’s idea, Roy Boulting replied that he and his brother wanted to shoot the film on location–something that was not common in the British film industry at the time.  “This required a great deal of co-operation from the local authorities in Brighton and they feared that unless it was indicated in the film that the days of the racetrack gangs were over, some people might come to Brighton looking for trouble.  Brighton before the Second World War was the center of the warfare among racetrack gangs, and this provided Graham with the milieu for his story.  As a kind of technical adviser on the film we had a man who had carried a razor for Sabini, the gangster chief on whom Graham based the character of Colleoni.”

John Boulting adds, “There have always been two Brightons; Brighton has always been a strange mixture of holiday crowds plus a seamy subworld which is really the overspill of people from the slums of the east end of London.  But it is true that the postwar Brighton is not like it was in the days of the race gangs, so we didn’t mind affixing the preface to the film in exchange for being able to to the film on location.

Since the movie has followed the spirit of the novel so closely all along, the filmgoer is just as psychologically prepared for Pinkie’s death at the end as is the reader of the novel, and the gangster’s disappearance over the cliff into the void is breathtaking.  But the final scene of the film is a departure from the novel which is quite unexpected in the light of the fidelity to the book up to this point.

It is a nun, rather than a priest, who speaks to Rose of “the appalling strangeness of the mercy of God,” and suggests that if Pinkie loved her, then there is some hope for him.  Rose then  proudly produces the record which Pinkie had made for her and puts it on the phonograph.  The message that Pinkie had recorded earlier was, “You want me to say I love you.  Here’s the truth.  I hate you, you little slut.”  Now as the camera moves in on the phonograph turntable we hear Pinkie say, “You want me to say I love,” and at that moment the phonograph needle sticks, and the phrase “I love you, I love…” is repeated over and over.  The camera pans up to a crucifix on the wall and the film ends.

I was surprised to learn from Greene that he had altered the original ending of the story himself.  “I liked the ending of the film,” he told me, “and I am completely responsible for it.  I have complete justification for the needle sticking on the gramophone record.  I knew the censor and the distributors would not accept the ghastly ending of the book.  I also knew that thinking people would realize that one day Rose would play the record and move the needle beyond the crack and thus get the shock with which the book ends.  The inevitable outcome was only delayed.  It was the director’s idea to pan up to the crucifix on the wall, however.  This gave the impression that the needle stuck miraculously.  Earlier in the film Pinkie had tried to destroy the record but was interrupted by Rose.  This explains the crack in the record; there is nothing miraculous about it.”

“In general,” says Roy Boulting, “the ending of the film emerged out of the refusal of the censor to accept the ending of the novel…The idea of the camera’s panning up to the crucifix as the final image of the film was decided on the studio floor while the scene was being shot.  I liked this image because to me it implied that the needle sticking n the record was an example of the ‘appalling strangeness of the mercy of God’ working in behalf of the girl, shielding her from the knowledge of the kind of man Pinkie really was until she was better prepared to accept it.”

John Boulting, however, thought of the ending in a slightly different way: “The additional shot of the camera panning up to the crucifix for me was an ironic comment on Rose’s religious faith, which was much to naive.”  In any event, the ending of the film is thought provoking, as witnessed by the varying interpretations of it given by the three creative artists who were involved in fashioning it.

Greene had initially expressed misgivings about the casting of Richard Attenborough as Pinkie, sayiing that he thought the young actor, who had played Pinkie in a stage version of the novel, was not physically right for the part.  In the end, however, after he saw the film, he wrote a note to the Boultings saying that Attenborough was as close to Pinkie as he had conceived him as any actor could be.  By and large Greene is happy with the way the film of Brighton Rock turned out, and it does rank in the upper echelon of Greene screen adaptations.

Graham Greene: The Films of his Fiction by Gene D. Phillips, 1974