Toronto Film Society presented Bringing Up Baby (1938) on Thursday, August 24, 1967 as part of the Season 19 Summer Series “And On to the Present”, Programme 1.

Certainly among the greats of all the Laurel and Hardys, this displays an inexorable development of action that can only be described as symphonic, starting from the tiniest of incidents and building to utter chaos with the crazy logic that was theirs alone.  In Ed Kennedy the boys find an opponent as worthy as Jimmy Finlayson was in Big Business.  (Placed 20th in the international critics’ poll.)

Contains excellent examples of Laurel and Hardy’s dialogue.  Example (by Laurel): “I’m not as dumb as you look.”  The boys are involved in a marital lawsuit, the adoption of a baby and sundry other complications too painful to mention.  George Marshall joins the list of to-flight directors who worked with Laurel and Hardy.

This is the earliest of the WB cartoons we are showing this summer and the difference in animation style is quite noticeable.  The content is quite unusual, consisting of a wildly surrealistic hunt for the dodo bird in Africa.  It does not star any of the famous characters, but rather the star is the completely unfettered imaginations of that wonderful bunch at WB. 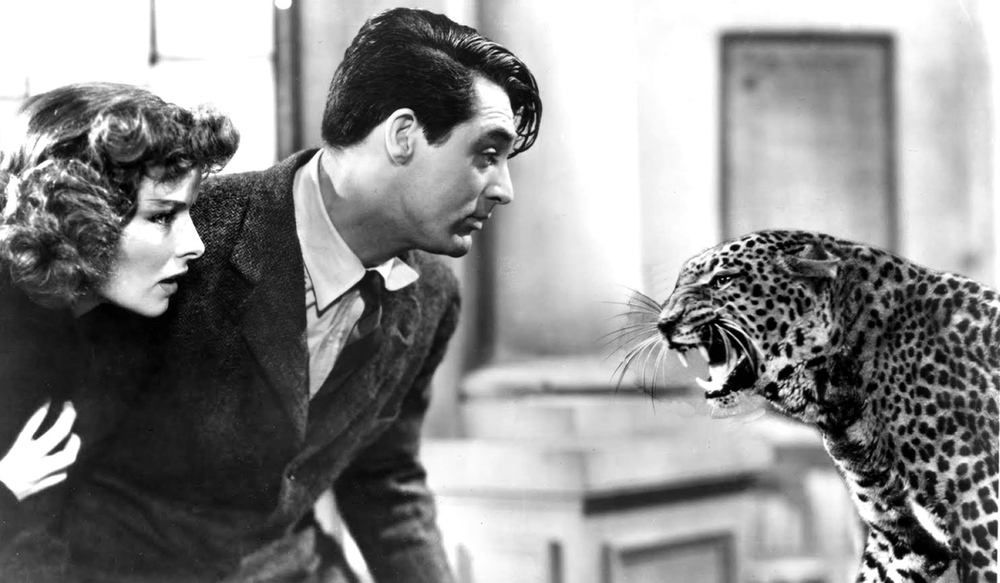 “Crazy comedies continue to become crazier, and there will soon be few actors and actresses left who have no straw in their hair.  Bringing Up Baby combines all the proved comic situations from earlier films of the type and thereby gives Katharine Hepburn plenty of opportunities to fall flat on her face, which she does with unexpected verve and enthusiasm.  Cary Grant, adept by now at knockabout, adds real wit and acting ability to the slapstick and there is the usual prolonged scene with the entire cast versus an enraged local constable in the police cells.  In spite of its similarity to all the other films of this genre” [one can only ask, Where are all these other equally funny comedies now?] “the film is definitely funny!”

Slapstick and knockabout seem scarcely adequate terms to describe this comedy.  It is one of the finest examples of that brand of American humour based on some unlikely premise which is developed by endless invention, elaboration and wit.

Howard Winchester Hawks was born in Goshen, Indiana, in 1896.  From the age of 16 to 21 he earned his living as a racing-car driver, built a couple of cars and one or two planes.  He found his way into the prop department of Famous Players-Lasky Studio during vacations; by 1926 he was averaging two pictures a year.  Through the years, his range of subject matter has become ever more catholic–ranging through gangster stories, comedie, Westerns, a musical, even an Egyptian spectacular.  But he has often returned to the milieu of men and machines of his early years.

Hawks is an unpretentious and typical man of Hollywood, a craftsman who has given long and astute service to the industry.  He is typical, too, in the sense that all his films have been aimed at the ordinary mass audience.  Constance Lambert once remarked that, in the arts, the dunghill of today is often the pot-pourri of tomorrow.  The expression is rather sharp, but it embodies an interesting truth: that the unpretentious popular entertainment of the past often proves in retrospect to be more truly “art” than the work which took itself, and was taken by others, more seriously at the time.

Bringing Up Baby is one of the those magnificent comedies which, after you’ve seen them, almost oblige you to talk about this bit and that, the bit where Hepburn loses her dress in a club, the final, totally predetermined disaster in the museum, or any part of the monumentally crazy dialogue.  And, in an era of fiendish cartoon cats and devilish mice, it is refreshing to meet a feline that simply charms its elegant way across the screen–for, as Basil Wright concludes:

“For the benefit of those who expect a ‘family’ film, it must be pointed out that the infant referred to in the title is a fine, bouncing leopard.”

Errata:  Way Out West (shown August 14): Original story by Jack Jevne (not Jeyne) and Charles Rogers./All shorts in this programme were silent.
Omission:  George Stevens was the photographer of Double Whoopee.