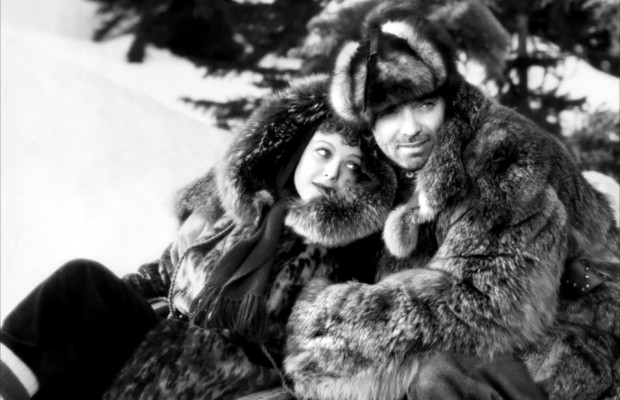 Toronto Film Society presented The Call of the Wild (1935) on Monday, April 6, 2009 in a double bill with Two Years Before the Mast as part of the Season 61 Monday Evening Film Buffs Series, Programme 7.

Shorty Houlihan: “You know, I know a coupla people who used to fool around like that and they got children now.”

With apologies to Jack London, the really big story here isn’t about a dog. Called “Hollywood’s best-kept secret,” it was finally revealed in 1994 in the book Uncommon Knowledge, written by Loretta Young’s daughter, Judy Lewis. In it, Lewis revealed a secret long known to the Hollywood community but strictly off-limits to the public. The revelations caused a break between mother and daughter, though they reconciled long before Loretta Young’s death in 2000. But Loretta insisted on keeping her secret until she died. Only in her posthumously released autobiography, Forever Young, did Loretta Young acknowledge the truth of what her daughter had written.

Loretta believed fervently in 2 things: highly pious Catholicism and Hollywood glamour and romance – but these were not always compatible. She loved living a Hollywood star’s life, and she believed as much as she could of it. For her, real life began when the camera was on. Her son, Peter Lewis, told Larry King “She told me before she died that the only time things were real to her was when they said ‘roll them’ and then the rest of the time it was an act: acting like a mom, acting like a wife, whatever it was.” But there were difficulties in trying to be both a good Roman Catholic and a top-rank movie star – difficulties that led Loretta Young to tell a very big whopper.

The official story was that Loretta Young (a single woman) visited a Catholic orphanage in San Francisco in 1937, fell for one of the toddlers there and adopted her. The real story is much more compelling. Young and Clark Gable met and became lovers in 1935 while filming The Call of the Wild. Gable was married to Rhea Langham at the time and Young’s first marriage had been annulled. Loretta was devoutly (some might say obsessively) Roman Catholic. She dreaded any censure by the Catholic Legion of Decency or the film industry’s Hayes Code. Movie stars were expected to adhere to strict morals clauses in their contracts (in public at least).

When she discovered she was pregnant, Young feared this would destroy two movie careers. Though their affair had caused a permanent rift between Gable and his wife, he offered Young no help with her predicament. Lewis says her parents elected to deny that they had ever had a relationship or a child. Gable backed out of the situation, leaving Young to make the decisions.

Loretta went to elaborate lengths to stage an adoption. While filming The Crusades (1935) for Cecil B. De Mille, she kept her secret pregnancy hidden under robes. Then she left for a long vacation in Europe. After an unpublicized return to California, she gave birth while hiding out in a small house on November 6, 1935. She parked the infant in an orphanage for nearly two years, then announced that she had adopted her.

After Young married her second husband, Tom Lewis, the child was raised as “Judy Lewis”. She grew up believing she was adopted, though the secret kept threatening to come out. Judy looked a lot like both birth parents, with her father’s telltale ears and her mother’s overbite. Until the ears could be pinned back surgically when she was 7, the child wore bonnets in public at all times. She and her mother were not close, and her childhood was lonely. In her teens, her close resemblance to her mother made her suspect she was really Young’s biological daughter, but she had no inkling of Clark Gable’s involvement

Judy met Gable only once, when she was 15. He was then filming Key to the City (1950) with her mother, and she assumed that was why he stopped by the house. She was flattered but puzzled by his interest in her, and never saw him again. She remained completely unaware that he was her father. Even her best friends had heard the rumor from their parents, but no one dared tell her. Jack Haley Jr., a pal from high school days, said: “Our whole group knew who her parents were – and we knew she did not know. But we thought her mother would tell her.”

On the eve of her own wedding, at 23, her fiancé told her Gable was her father. Lewis was astonished, and so frightened of losing her tenuous bond with her mother that she couldn’t speak to her about it. In her 30s, after becoming a mother herself, she finally confronted Loretta. As she’d feared, it didn’t go well. But Loretta admitted to her true parentage, stating that Judy was “just a walking mortal sin.” Judy never got to hear Gable’s side of it. On her 25th birthday, Clark Gable suffered a heart attack. Ten days later, on the first birthday of Lewis’ own daughter, Gable died.

Judy Lewis worked as an actress in New York. She appeared on Broadway in Jean Kerr’s Mary, Mary and performed on several daytime serials, including The Secret Storm and General Hospital. She won a Writer’s Guild award in 1951 for her work on the serial Search for Tomorrow and successfully moved behind the camera as producer of the TV show Texas (1980-82). Her struggle to claim her actual identity led her to seek counselling, and eventually led to the publication of her book. Loretta Young declined to confirm or deny her daughter’s account at the time, saying only: “This rumour is a product of (a) bygone time.”

After experiencing the benefits of counselling, Lewis went back to school in mid-life. Today Judy Lewis is a psychologist, specializing in marriage and family relations. She still strongly resembles both parents.