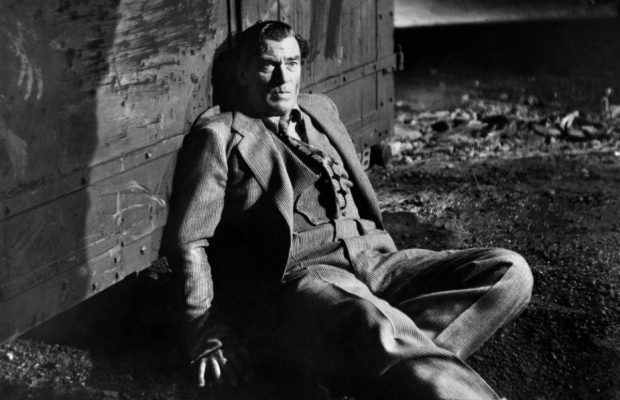 Toronto Film Society presented Calling Bulldog Drummond (1951) on Monday, April 3, 1989 in a double bill with Calling Murder Will Out [The Voice of Merrill] as part of the Season 41 Monday Evening Film Buffs Series “C”, Programme 6.

Captain Bulldog Drummond is enjoying his retirement from crime-solving, living with his “faithful companion” (a pre-requisite for crime-fighters it seems) Algy Longworth, on the farm he had long yearned for during the days he was battling the bad guys.  In these days it is not havoc, but hogs which take up most of his time.  However, when a London criminal gang begins operating with military-like precision, Scotland Yard decides it is time to call the Bulldog back from his farm “kennel” to crack the case.

This time though, Drummond (Walter Pidgeon), and Algy (David Tomlinson) are matched with a policewoman, Sgt. Helen Smith (Margaret Leighton) to solve the mystery.  Capt. Drummond is none too happy with his new partner (he’s from the old school, remember, but keeps the “stiff upper lip” and “carries on regardless”).  In no time, they have hooked up with the gang and the action starts.  Filmed in the early 1950’s at the very busy British MGM Studio, the picture at times is short on logic…but long on action.  Right from the start the picture provides the fast-moving action, which, at times, makes up for a script that is less than strong.

The Bulldog Drummond series had been dormant for almost four years at the time Calling Bulldog Drummond was brought to the screen.  Hugh “Bulldog” Drummond, an ex-British army officer who yearned for adventure, had been created in 1919 by Herman Cyril McNeile, writing under the nom-de-plume of “Sapper”.  Soon, the character’s film possibilities were realized and Drummond was the subject of several silent films.

What’s regarded as the “definitive” Bulldog Drummond was made in 1929 with Ronald Colman in the lead and Claud Allister as his “constant companion” Algy.  Colman also starred in the sequel Bulldog Drummond Strikes Back.  Most feel that no one ever topped the two Colman performances in the role.  The major series was made in the 1930’s by Paramount with John Howard as Drummond, John Barrymore as Inspector Neilson of Scotland Yard, Reginald Denny as Algy, E.E. Clive as the butler Tenny and a variety of girls as love interest for Howard.  The villains in these short, punchy films included J. Carrol Naish, Anthony Quinn, George Zucco and Eduardo Cianelli.  The series came around again in the late 1940’s, with Ron Randell and Tom Conway (who also was the star of another detective series, The Falcon), doing two Drummonds each.  They received fair to good reviews.  The last one was the one we are seeing tonight, Calling Bulldog Drummond, with Walter Pidgeon as Drummond and David Tomlinson as Algy.  Reviewer Leonard Maltin (among others) rated it well and found it unfortunate that the series with Pidgeon did not continue.  There are scattered other “Drummonds” with stars such as Ray Milland and John Lodge, but they are minor in stature.

Walter Pidgeon was born in St. John, New Brunswick in 1897 and educated at the University of New Brunswick, as well as the New England Conservatory of Music in Boston.  He was a stage actor, invited to Hollywood by Joseph Schenck to play opposite Constance Talmadge.  However, Schenck had second thoughts by the time he arrived and Pidgeon, with nowhere to roost drifted from studio to studio during the final years of silents.  His first film was Mannequin in 1926 directed by James Cruze.

He worked with excellent directors in the silent era, including Maurice Tourneur and Frank Borzage.  His star was on the decline when sound arrived, and went on the rise thanks to his beautiful baritone singing voice, which was used in early musical talkies.  However, illness forced him to reduce his work and after 22 films in five years, he made only seven films from 1931 to 1936, usually in supporting roles.  In 1937, he was put under contract to MGM, again in supporting roles.  He was loaned out to other studios, and ended up with better roles, including Dark Command in 1940 for Raoul Walsh, and How Green Was My Valley for John Ford in 1941.  Back at MGM, his roles became more major, and he was teamed with Greer Garson for the first time in Blossoms in the Dust in 1941.  The teaming continued with success in Mrs. Miniver (1942), Madame Curie (1943) and Mrs. Parkington (1944).  After the war, his roles slipped somewhat again.  He left MGM and returned to the theatre, in such hit shows as “Take Me Along” and “The Happiest Millionaire”.  A late jewel in his half-century of motion picture performances was his 1962 performance in Advise and Consent.  Pidgeon died of a series of strokes in California in 1984 at the age of 87.

Margaret Leighton was born in 1922 near Birmingham, England and was best described as a tall, distinguished, elegant leading lady of the British stage and screen.  She began training for the stage at the age of 15 and played her first professional role a year later.  She rose to prominence in the late 1940’s, after joining the Old Vic company, under the direction of Laurence Olivier and Ralph Richardson.  On stage, she won Tony Awards for her Broadway performances in “Separate Tables” (1956), and “The Night of the Iguana” (1962).  Her main performances were those of fragile, sensitive, highly vulnerable women.  Her performance tonight in Calling Bulldog Drummond was a definite break from such type-casting.  On the screen, she was nominated for an Oscar as best supporting actress for The Go-Between (1971).  She first came to the screen in 1948 in Bonnie Prince Charlie and The Winslow Boy.  Other notable performances were in The Holly and the Ivy (1952), Carrington V.C. (1954), Waltz of the Toreadors (1962), Seven Women (1966), and The Madwoman of Chaillot (as Constance in 1969).  Her last performance was the 1976 television movie Great Expectations.  She was married to publisher Max Reinhardt, actor Laurence Harvey and actor Wilding.  Miss Leighton died in 1976, a victim of multiple sclerosis.