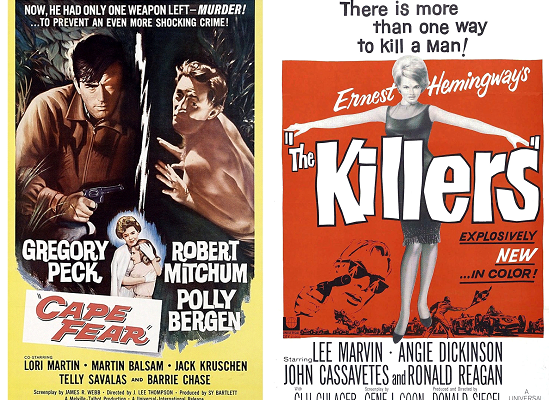 This afternoon’s two films present two very convincing villains from society’s underworld, played by one who was accustomed to playing villains, and by one whose only villainous role this was: Robert Mitchum and Ronald Reagan. 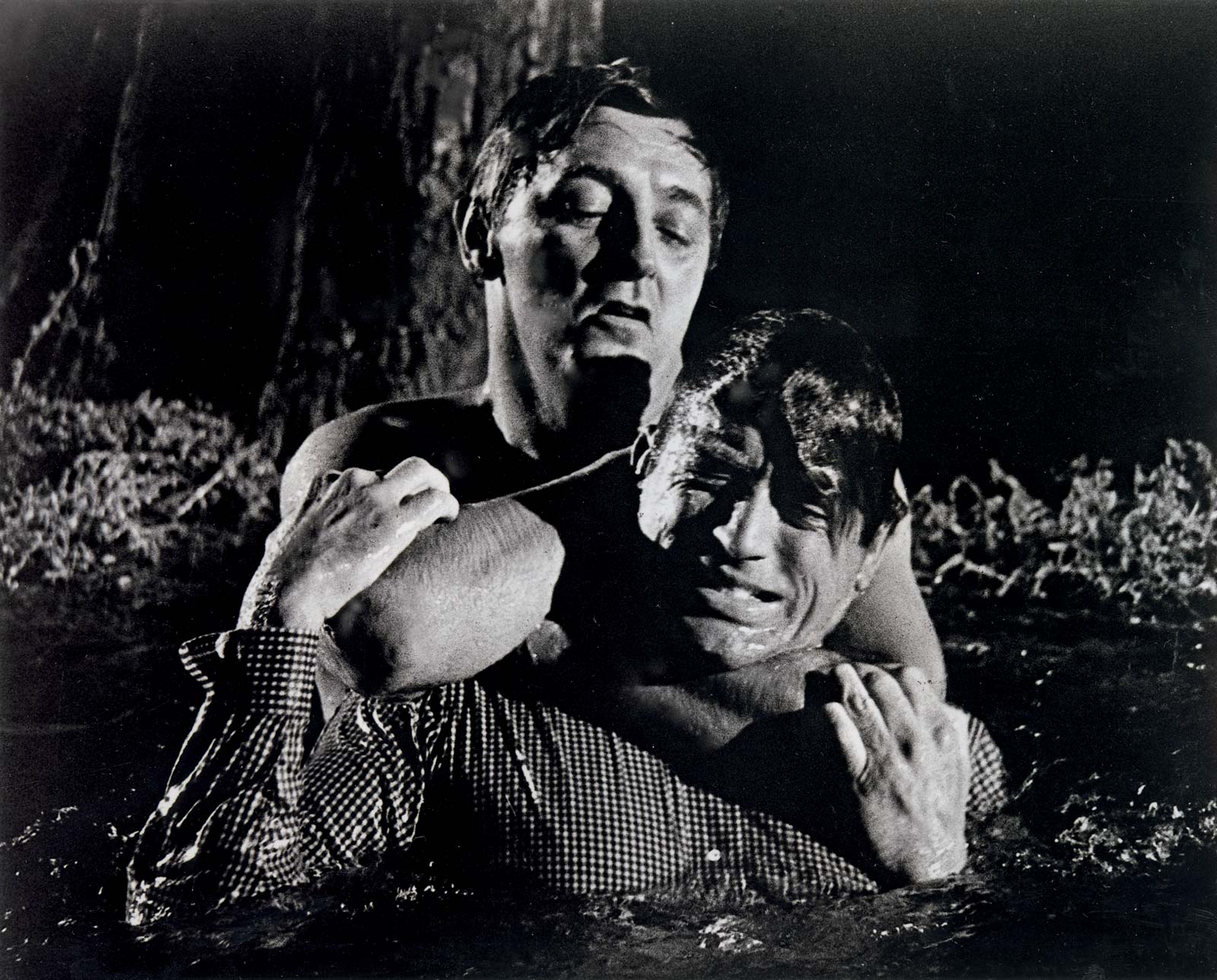 Robert Mitchum is one of the most underrated of Hollywood’s leading men of the third quarter of the century.  His career was shadowed by marijuana in the late 40s, and for some those fumes have never cleared away; he has never acquired the solid star status that his antagonist in Cape Fear, Gregory Peck, did.  He and Peck were born at much the same time (1916-17), and made their screen debuts in 1943; but whereas Peck’s career took off at once, with his second and third pictures (The Keys of the Kingdom and The Valley of Decision) in 1944, Mitchum made no fewer than 18 routine movies in 1943 (including several Hopalong Cassidys), and made little of a mark before he was nominated for Best Supporting Actor of The Story of G.I. Joe, his twenty-fifth picture.  When he really caught on with those two noir classics of 1947, Pursued and Out of the Past, Peck was an established star, most recently in that year’s Academy Award picture, Gentleman’s Agreement.  Oddly, their situations have been rather reversed since the mid-1970s, with Peck frittering away his talents on such potboilers as The Boys From Brazil, and such out-and-out rubbish as The Omen, and Mitchum playing one of the most satisfying Philip Marlowes in Farewell My Lovely and The Big Sleep, and, on television, creating the hero, with real sympathy and authority, of Herman Wouk’s “The Winds of War” (and, before long, “War and Remembrance”).  When these two careers intersected, in Cape Fear, Mitchum’s image was well established from such roles as the partner of a homicidal Jean Simmons in Angel Face, and the Love-Hate itinerant preacher of The Night of the Hunter; and Peck was an icon of rectitude, to be summed up in the role of Atticus Finch in To Kill a Mocking Bird the following year.  In Cape Fear it is evil versus good, the psychopathic loner-criminal stalking the pillar-of-society lawyer who has sent him to prison.

Mitchum probably never played a more malign role than here; for sheer mance and saism it is far beyond his famous portrayal of villainy in The Night of the Hunter.  The situation of Cape Fear is as old as the oldest melodrama, and was put into classic cinematic form as early as Griffith’s The Lonely Villa (1909): in the isolation of his home, the hero’s wife and child are harassed by the villain.  To be sure, as the mother and three girls retreat from one room to the next, going deeper into the interior of the house, Griffith’s film is insistently symbolic of sexual peril, but in Cape Fear the sexuality and its threatening nature is quite overt: the villain begins by prowling the house, he poisons the family dog, and he broadly hits at sexual retaliation against he daughter.  He actually does rape the bar girl (played by Barrie Chase, one of Fred Astaire’s last partners; so this is an act of desecration) who inadvisedly takes him to her apartment.

The film builds to its claustrophobic climax–claustrophobic because the police cannot move against he villain until he actually does something, and the bar girl is too frightened to testify against him.  He is no vagrant, for he has money in the bank.  Peck must eventually levy his own law, and the final struggle is fought out in a steamy swamp, where the two men return to the atavism of pure evil against the no less striking atavism of the man protecting his loved ones.  This picture belongs to the villain and hero; all the other characters, even played by some strong actors, are auxiliary.  And the air of seedy dread–befitting its literary genesis in a John D. MacDonald novel–that pervades the picture makes the villain ultimately primary.  As Bosley Crowther, that touchstone of middle brow taste, warned in the New York Times: “don’t take the children.  If you want to be horrified, that’s your business.  But don’t expose the yongsters to the ordeal of watching this film.”  As well as being an implicit rejection of state censorship–for many countries would ban for adults a picture they didn’t think their children should see; can you think of any such distant countries?–Crowther’s view is one to taken seriously.  Mitchum’s is a transfixing performance, the epitome of reptilian villainy and aggressive, overtly sexual, threat. 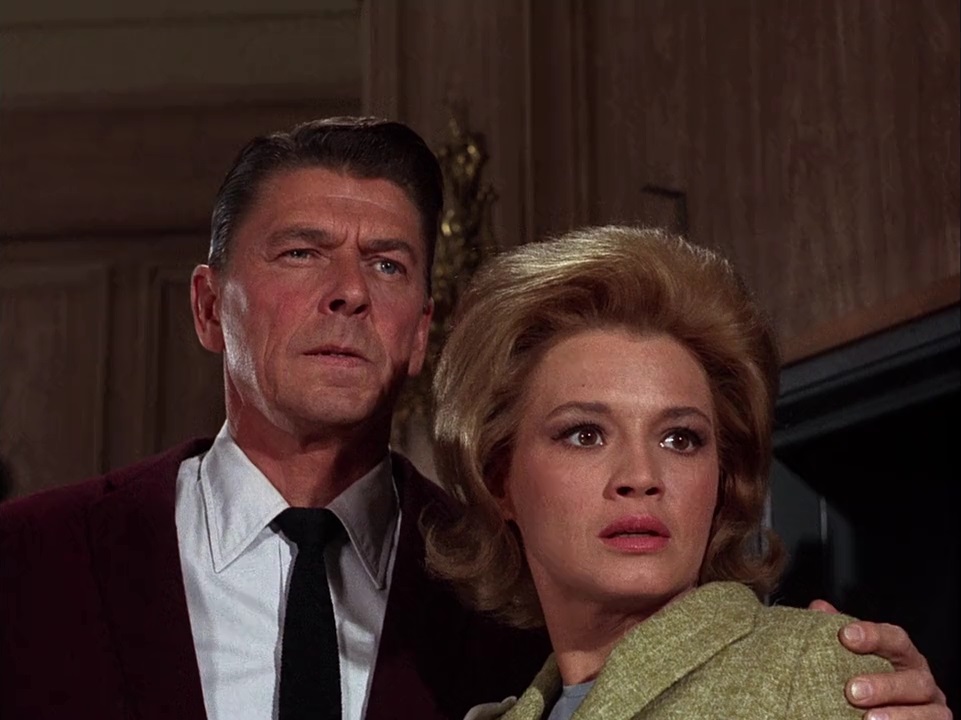 By comparison, Ronald Reagan’s performance in The Killers is almost benign–but only by comparison.  This was his last picture, filmed in the year Goldwater made his run for the Presidency, which event produced Reagan’s own shift from acting to active pursuit of elective office.  The Killers is an odd and inappropriate coda to Reagan’s career, following as it does fifty-two pictures in which he was generally the essence of All-American geniality, social responsibility, or both.  For Reagan too is an underrated actor.  His film career has seemed highly risible in certain quarters this past decade or more, especially amongst the pseudo-intellectuals of the campus or (even less justifiably) the newspaper office; but the truth is that Reagan, in his typical roles, always acted himself–the radio announcer, the football star, the debonair solider on leave, the mildly hen-pecked husband, the crusading sheriff or college professor; the Presidency of the United States was a natural evolution from these civic and responsible roles, with the presidency of the Screen Actors’ Guild and the governorship of California as way stations.  To turn Mort Sahl’s quip about Eisenhower (“Let’s elect Ben Hogan; if we’ve got to have a golfer for President, let’s have a good one”): “The President has to be an actor; let’s have a professional one.”  But The Killers, his fifty-third picture, confirms Reagan’s career-long creation of a persona not much different from his real one, for here the role is entirely different from the self.  An actor of experience, he can convince us of Browning’s villainy, but this is not the Ronald Reagan we know (or knew in 1964, if partisans prefer).  (But before Democrats guffaw knowingly at Reagan slapping Angie Dickinson around, they might pause to recall that this was not the only U.S. President she tangled with in art or in life, for she was one of that endless string of girls favoured byJFK: a strange commentary on the growing relationship, so persuasively argued in Gary Wills’s recent book “Reagan’s America”).

Hemingway’s moody short story had been filmed before, in the famous Robert Siodmak version of 1946 which was Burt Lancaster’s first picture.  While Siodmak took liberties with the original–in which nothing much happens, as two hired killers wait in a diner for the quarry, who makes no attempt to escape them–this version of 1964 takes much greater liberties, largely losing touch with its source.  This film began as a television play, one of a series called “Project 120” devised to fill the gap caused by the dwindling number of feature films made for theatrical exhibition in the early 1960s.  Television had gobbled up most of the existing old theatrical films, and the plan was to produce the “Project 120” first for the little box, and then to release it, after a successful first exposure, to the big screen.  The Killers was the first production of “Project 120”–and the last.  Originally entitled “Johnny North” (with not much relation at all to Hemingway), it was released directly into the theatres because NBC was advised by the television censors that it was too violent and brutal for family audiences gathered in the living room.  It was then retitled to catch the largely fortuitous resonances of its famous literary “source.”

There are other villains in The Killers, and Lee Marvin is the chief of these.  Here he plays perhaps his second most villainous role.  While as his career wore on his villains often took on a genial tinge, he is best remembered for his incarnations of the villain as clod and boor, as here and, still more notably, as Liberty Vallance in one of John Ford’s last masterpieces.

The man who guided this sixties-style study of villainy was Don Siegel, who rather to his own surprise became in the 1950s one of the darlings of the Cahiers du cinema crowd (foule?).  He was well equipped to direct such a picture, for his forte, especially in the 1950s, was for moody, more or less noir studies in criminality, though he is perhaps best remembered for that great McCarthyite (or anti-McCarthy?) exercise in paranoia, The Invasion of the Body Snatchers (1956).

To see Mitchum and Reagan (for even Mitchum sometimes adopted the genial Reagan persona, and his villainy, though convincing, was intermittent)–to see these two playing villains is to catch a fleeting glimpse of the versatility of Hollywood in its heyday, and to note the tolerance of the audience for falls from grace, at least for its second-string leads.  Who knows that the youngest of us may not live to see Reford and Newman playing villains.  Then the Republicans can guffaw!