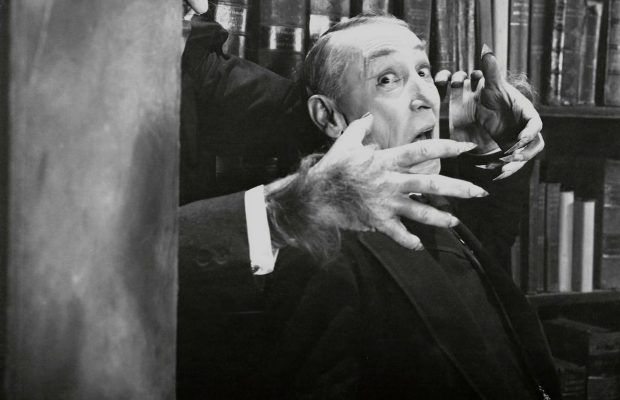 Toronto Film Society presented The Cat and the Canary (1927) on Monday, November 29, 1954 as part of the Season 7 Monday Evening Silent Film Series, Programme 2.

The programme will open with two National Film Board productions, The Wind-Swept Isles and The Son.  There will be a ten-minute intermission, followed by the feature film.

The Cat and the Canary, U.S.A. 1927.  Produced by Universal Pictures.  Directed by Paul Leni.  Baed on the play by John Willard.  Photographed by Gilbert Warrenton.  Sets by Charles D. Hall.

The Cat and the Canary was made in a period when Carl Laemmle was filling his studio with imported, predominantly German, talent.  It was handed to Paul Leni as his first American assignment, following years in Germany as a set designer (Variety and Manon Lescaut) and director (Waxworks).  If the script is thoroughly American, the handling of it certainly shows the influence of Leni’s German background.  Lighting and camerawork throughout have been borrowed from the classic German fantasies of the early twenties; the impressionistic opening immediately after the main titles is still one of the most effective establishing sequences ever put on film; the imagery of the clock striking prior to the reading of the will is a telling piece of cinema too.  The Germanic touch is further in evidence in the character of the Doctor, whose makeup is a startling–and obvious–composite of Dr. Caligari and Murnaus Dracula.  The Cat was not without influence itself, especially in the early thirties.  The wonderful moving camera shots down deserted corridors and past billowing curtains were duplicated many times, e.g. in James Whale’s The Old Dark House.  Universal remade it in 1930 as a talkie, The Cat Creeps, which closely imitated the style of the original, and quite effectively too.  Even Paramount’s later remake with Bob Hope showed signs of having been made only after a careful study of Leni’s film.  But it was a type of horror tale far more suited to the silent medium.  Like The Bat, it was a stage derivation, and one with a marked comedy content, but it remains thrilling and gripping fare for all that.

In the sets the then prevalent influence of German films is to be seen in the exterior set of the mystery house, while Leni’s touch is evident in the dramatic lighting of the interiors, particularly in the Gothic effect obtained in the long entrance-hall.  The oblique camera angles, the scene looking downward on the assembled characters, the shot through the high back of a chair were expected not only of every German director at the time but of directors in Hollywood generally.  In 1927 was the year of camera angles.  The Cat and the Canary is more agreeable to the eye than most mystery films and it does succeed in being frightening in an imaginative and cinematic way, as when Crosby’s body pitches out of the secret panel.  The acting, like the characterization, is neither here nor there, and while this remains one of the best examples of its type of film, it seems a pity that Leni could not have directed something more psychologically profound, more appropriate to his peculiar talent for evoking spiritual rather than physical terror.

Note:  Before his death, Paul Leni made two more thrillers for Universal: The Last Warning also with Laura La Plante) and The Chinese Parrot (the first Charlie Chan film)–and a screen adaptation of Victor Hugo’s The Man Who Laughs, starring Conrad Veidt.