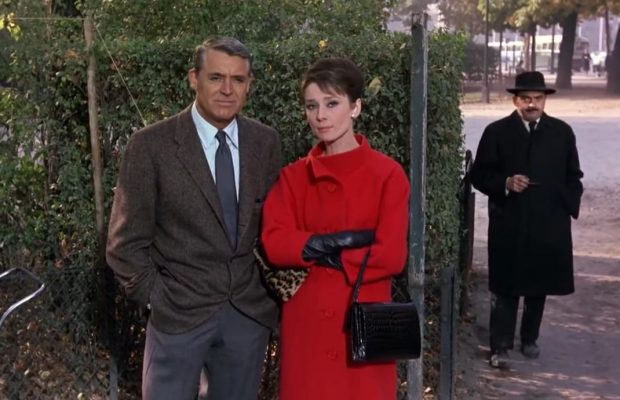 Toronto Film Society presented Charade (1963) on Monday, August 31, 1987 in a double bill with People Will Talk as part of the Season 40 Summer Series, Programme 8. 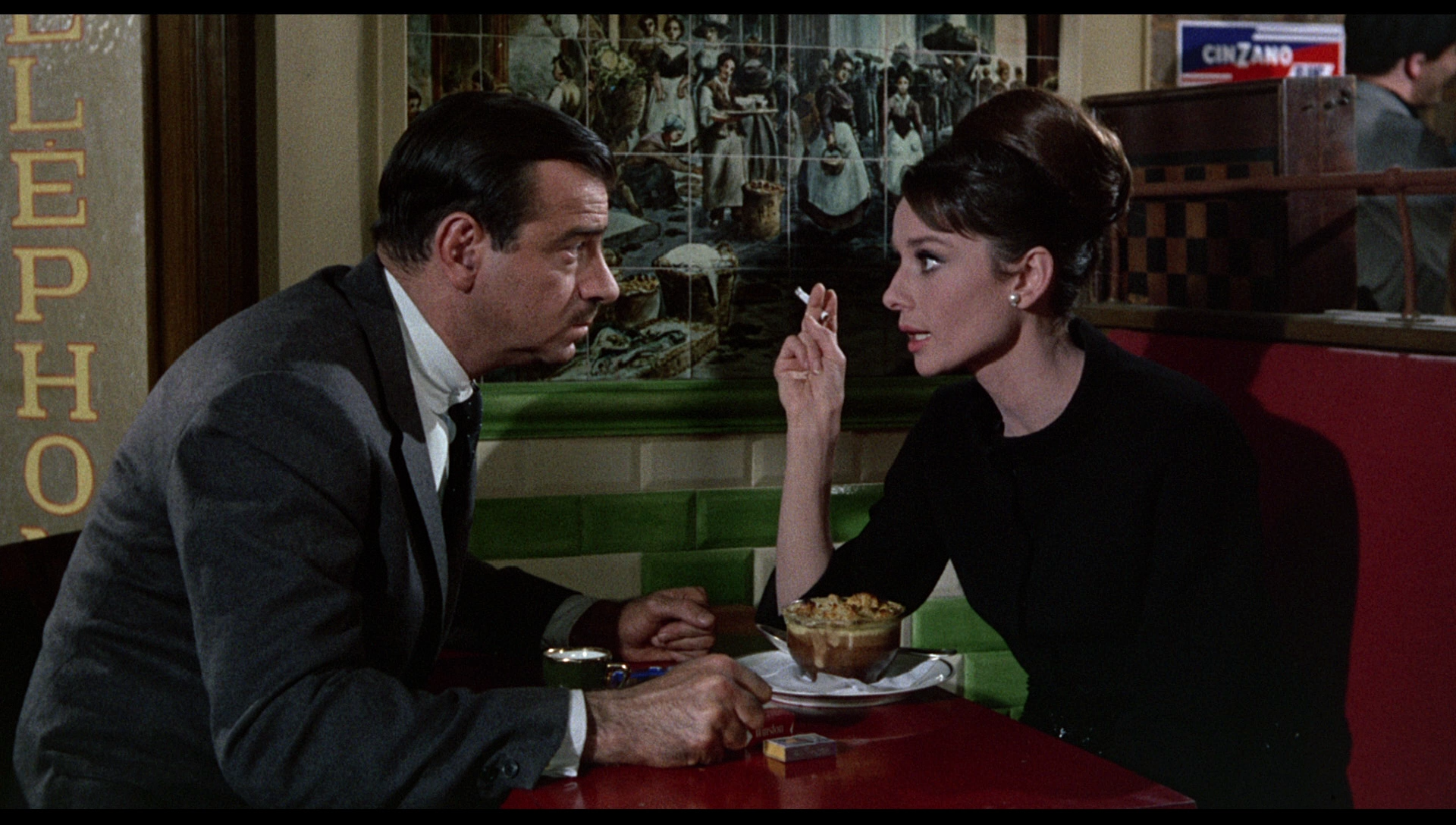 Stanley Donen’s Charade owes a great deal to the Hitchcock school of intrigue and suspense, offering handsome stars (Grant and the Givenchy-gowned Audrey Hepburn) in an amusing and entertaining melodrama set against handsome backgrounds. Hepburn played the freshly-widowed Reggie Lambert, whose estranged husband’s murder uncovers the fact that he was in possession of an unaccounted-for $250,000 now being sought by his three mayhem-minded ex-OSS buddies (George Kennedy, James Coburn, Ned Glass). Grant is Peter Joshua, a mystery man who comes to the young widow’s aid when her life is threatened by the gang. Peter Stone’s screenplay is rife with clever, implausible plot twists, and of course Joshua is not what he seems. Is he trying to help Reggie? Or does he want to kill her?

Charade is top-notch entertainment, wrapped in as glittering a package of fun and games as moviegoers had witnessed since North By Northwest. Despite a wide age difference, Audrey Hepburn (34) and the graying but physically-fit Grant (59, but looking 45) make an excellent team, completely plausible even in their witty romantic scenes. Sensibly, Stanley Donen directs this confusing but stylish movie at a rapid pace, diluting the more violent moments with humour, and always maintaining an eye for the visual. And the proceedings are neatly underscored by Henry Mancini’s brittle music.

Director Donen and scripter Peter Stone, obviously “inspired” by the handiwork of other filmmakers who have worked successfully in this genre, may not have the most original of plots or even treatments, but they can be proud of their final handiwork.

Basically a suspenser or “chase” film, Charade has several moments of violence but they are leavened with a generous helping of spoofery. Donen plays the taut tale against a colourful background of witty dialogue, humorous situations and scenic beauty – a style that has become known as “black comedy.” Stone sometimes changes a plot situation with a single line of dialogue (as in some of Grant’s exposures), which necessitates concentration on the part of the viewers.

Fast-paced, from the pre-title shot of a body tossed from a train to the finale under a theatre stage, Charade seldom falters (amazing, considering its almost two-hour running time). Violent incidents used are necessary to the plot, not merely inserted to accent the action. In the same manner, humour, while abundant, is never forced. Repartee between the two stars is sometimes subtle, sometimes suggestive, sometimes satirical but always witty. The occasional use of broader comedy includes one hilarious bit when the heroine tries to disrobe the hero so that she can search his suit.

Charles Lang, Jr.’s Technicolor photography captures the charm of photogenic Paris (and some beautiful opening shots of Megeve, in the French Alps). He keeps the camerawork generally low-keyed as much of the action is interiors or occurs at night. James Clark’s editing, brisk and economical, is responsible for much of the excellent pace.

Biggest disappointment for viewers, used to the fabulous costumes Givenchy usually provides for Hepburn, is the wardrobe he has provided for Charade. Other than the “haute couture” promise of her opening-sequence ski suit, there’s little evidence of the high style so suitable to the star. Her gowns are attractive, but…. 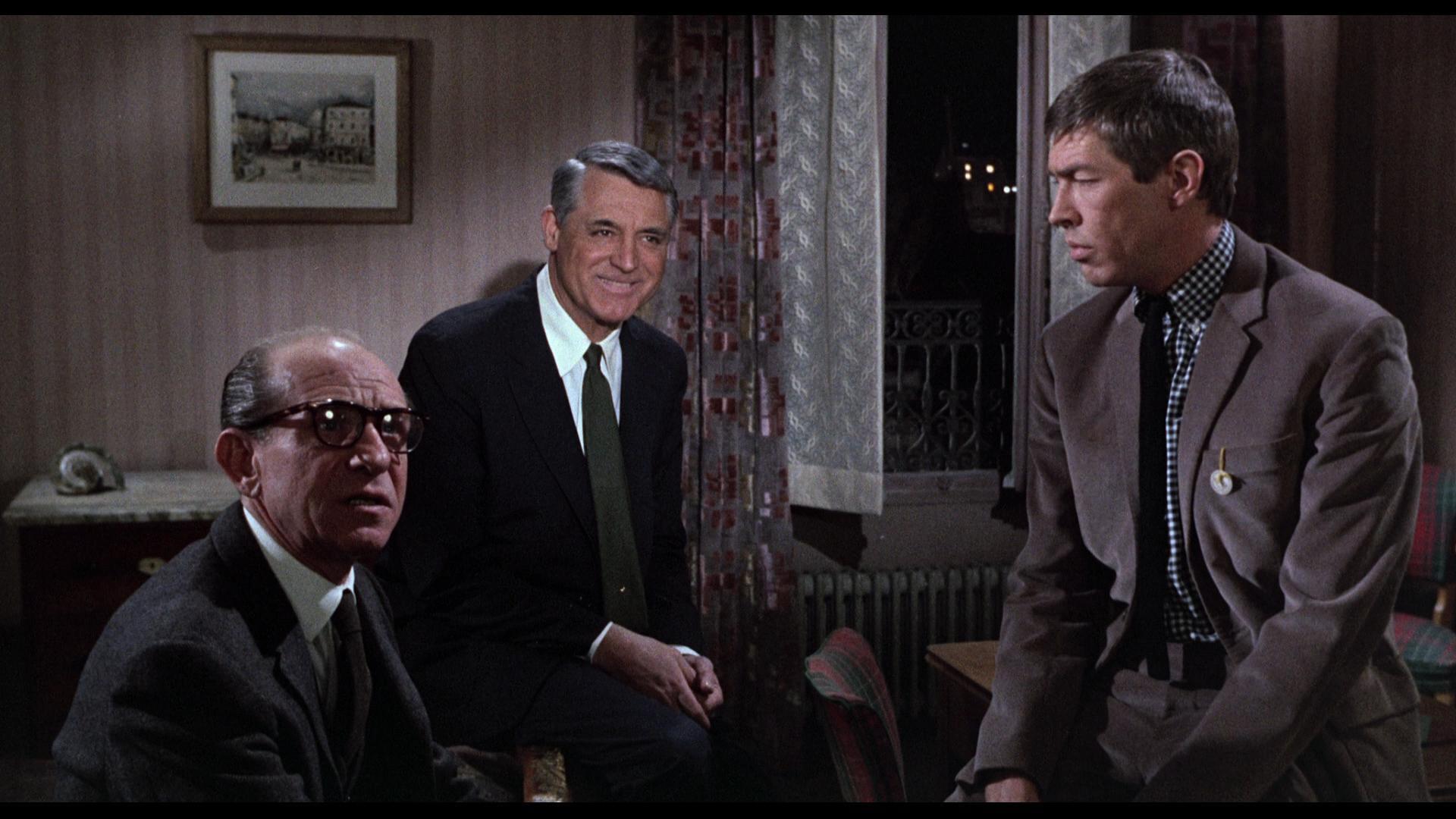 Bosley Crowther of The New York Times felt at the time that “this romantic comedy melodrama, in which Hepburn and Grant skitter and scoot around Paris as participants in a cheating-cheaters chase, has so many grisly touches in it and runs to violence so many times the people bringing their youngsters to see the annual Nativity pageant and the Christmas stage show may blanch in horror when it comes on…I tell you, this light-hearted picture is full of such gruesome violence.

He goes on to say, “that much explained, however, there’s a lot to be said for it as a fast-moving, urbane entertainment in the comedy-mystery vein. Peter Stone, a new chap, has written a screenplay that is packed with sudden twists, shocking gags, eccentric arrangements and occasionally bright and brittle lines. And Donen has diligently directed in a style that is somewhere between that of the screwball comedy of the 1930’s and that of Hitchcock on a North By Northwest course. The players, too, have at it in a glib, polished, nonchalant way that clearly betrays their awareness of the film’s howling implausibility. Hepburn is cheerfully committed to a mood of how-nuts-can-you-be in an obviously comforting assortment of expensive Givenchy costumes, and Grant does everything from taking a shower without removing his suit to fighting with thugs, all with the blandness and the boredom of an old screwball comedy hand. Walter Matthau is tiredly amusing as a fellow at the American Embassy, and Ned Glass, George Kennedy and James Coburn are thoroughly disagreeable as the thugs.”

Stanley Donen had difficulty getting this project started. He wanted to do a film like one of his favourites, Hitchcock’s North By Northwest. So he searched to find some piece with a wonderful story and the same idiom of adventure, suspense and humour. He liked very much the idea of the mistaken identity of the leading man. He found and bought the short story The Unsuspecting Wife by Stone and Behm which was to be Donen’s third film for Columbia. When he announced that he wanted Grant and Hepburn in the movie, Cary was not available, although Audrey was. Columbia said to get Paul Newman who agreed to do it, but Columbia then wouldn’t pay his going rate. They said to get Warren Beatty and Natalie Wood which was agreed on, but then Columbia decided they couldn’t afford them either and then felt they couldn’t afford the picture at all. Columbia did this to Donen before so when his contract was terminated, he sold Charade to Universal. In the meantime, Grant became available. As in Hitchcock films, once again Cary Grant would be presented as every woman’s desire but someone who was probably not quite what he appeared.