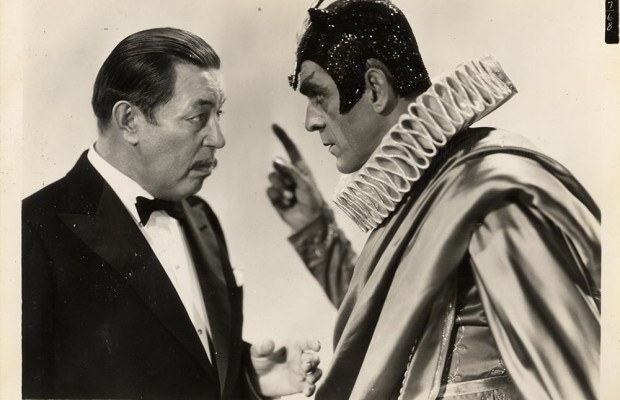 Toronto Film Society presented Charlie Chan at the Opera (1936) on Monday, November 30, 2015 in a double bill with The Great Caruso as part of the Season 68 Monday Evening Film Buff Series, Programme 3.

Chinese-American sleuth Charlie Chan was one of the twentieth century’s most popular and enduring characters.  Author Earl Derr Biggers created him in 1925 for a series of mystery novels.  He was loosely based on an actual Honolulu police officer named Chang Apana, though the plots bore no resemblance to Mr. Apana’s actual career.  Derr Biggers wanted to create an alternative to current Yellow Peril stereotypes.  Unlike such villains as Fu Manchu, Chan was portrayed as non-threatening and benevolent, and he worked firmly on the side of the law.

The character fit nicely into movies.  Charlie Chan first appeared on film as a character in silent serials.  He also popped up in the 1929 early talkie Behind That Curtain.  There have been 58 Charlie Chan movies to date, including some from Germany and several Hong Kong quickies.  But the greatest period for Charlie Chan films was during Hollywood’s golden age, the 1930s and ’40s.

In 1931, Fox studios cast Warner Oland as Charlie Chan.  Oland played Chan as a soft-spoken, polite detective, different from Derr Biggers’ original, more assertive character.  However, Chan’s wise proverbs and powers of deduction remained much the same in the films as they were in the novels (Chan was never at a loss for proverbs or sayings for any situation).  One of the elements that made the Fox series so popular was the addition of Charlie Chan’s enthusiastic Americanized sons, played mainly by Asian actors Keye Luke, Sen Yung, and Benson Fong.  Their amateur detective work and comedic chemistry with their onscreen “dad” was a key addition to the films’ success.

When Warner Oland died in 1938, there was uncertainty whether or not the role of Chan could be re-cast.  20th Century Fox decided to continue the popular series and cast Sidney Toler (another non-Asian) as Chan.  Toler played Chan more assertively and humorously than Oland had and was a hit with fans of the series.  20th Century-Fox made 11 more Chan films with him.

The studio dropped the series in 1942, but Sidney Toler carried on with the part at Monogram Studios.  Toler played Chan in 11 more movies there, continuing until his death in 1947.  Monogram was eager to re-cast, as it was still a successful series.  Actor Roland Winters got the role, and he played Chan in six films.  Many felt that Winters was miscast.  He did not really look Chinese and he was nearly the same age as Keye Luke, who played his son.  Winters played Chan until 1949’s The Sky Dragon, the last of Hollywood’s Chan movies.

Of the many, many Charlie Chan films, Charlie Chan at the Opera is generally considered the best, with a strong cast and high production values.  The film has a very good look; Twentieth Century-Fox re-used their lavish sets left over from the Tyrone Power-Loretta Young his Cafe Metropole.  Included in the movie is the opera “Carnival,” composed especially for the film by Oscar Lebant.  Boris Karloff did not do his own singing in this; his voice was dubbed by singer Tudor Williams.  Benson Fong plays only a small part here, he later played Tommy Chan (#3 Son) in the Charlie Chan series.

WARNER OLAND –“Jack” to his friends–was born Johann Olund in 1879 in Vasterbotten, Sweden.  He emigrated to the United States as a boy with his parents and settled in California.  Olund changed his name to the more “Americanized” Warner Oland and began acting in small parts in silent films during the 1910s and 1920s.  He landed more prominent roles when sound arrived in the late 1920s, including a role in 1927’s talkie breakthrough, The Jazz Singer.

His greatest success came in 1931 when he was cast in the title role in Charlie Chan Carries On.  His portrayal of the charismatic Asian detective won him critical and popular acclaim.  Fox Films launched a long series of Charlie Chan movies, churning out three a year, and filming them with relatively high budgets.  Oland played the part in 16 films.  By 1935, Oland was so identified as Charlie Chan that he was assigned to the series exclusively.  His last 8 films were all Chan entries, usually co-starring Keye Luke, who played Number One Son.  Though stereotypical by today’s standards, the films won critical acclaim and all were hugely profitable.

Modern film historians question the casting of a Swede playing an Asia, but he was actually quite well suited for the part.  Oland was often mistaken for Chinese, even in Shanghai during a promotional visit.  He had straight black hair, and his features naturally had an Asian cast.  He attributed this to the fact that his Russian grandmother was of Mongolian descent.  Oland used little make-up to play Chan; he basically curled down his moustache and curled up his eyebrows.

Oland became wealthy and enjoyed breeding miniature schnauzers.  Although a seemingly happy man, Oland became increasingly dependent upon alcohol and exhibited  delusional behaviour.  Because Oland was one of Fox’s biggest money earners, his alcoholism was tolerated and suppressed from the public.  But Oland’s physical and mental problems caught up with him when he suffered a steep and sudden decline in 1937.

His wife of 30 years, Edith Shearn, could take no more and filed for divorce.  Shortly after completing Charlie Chan at Monte Carlo (1937), Oland began experiencing symptoms of dementia.  He was apprehended walking through his neighborhood in his underwear in the company of his prized miniature schnauzer, completely disoriented.  But he tried to keep on working.  In January, 1938, Charlie Chan at Ringside began shooting at Fox’s Western Avenue lot with an increasingly erratic Oland.  After only a few days working, Oland walked out, complaining the studio was possessed by voodoo spirits.  He was hospitalized for a time, then decided to return to Sweden.  During his visit to Sweden, Oland reconciled with his wife, but he contracted bronchial pneumonia and died there in 1938, aged 57.