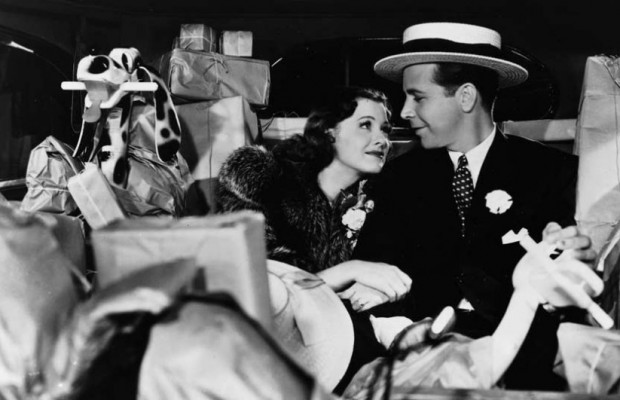 One problem that proved a roadblock to the development of a screen personality for Charley Chase was the one reel format.  With only ten minutes or less for each film there was no time to build up a character for Chase–often not even enough time for any plot, just a loose idea which served as a framework for gags.  With few exceptions, the one-reel Chase comedies end abruptly, and in some cases show promise of being quite funny when they are suddenly cut off by the Pathe rooster.  One of the prime examples of this is All Wet, one of Chase’s best and most famous silent comedies, which inevitably gives the impression of being cut from a longer film when viewed today.  Still very funny, in spite of its shortness, All Wet was one of Charley’s first associations with a new director, an Irishman with a great sense of humour who was still feeling his way in the film business.  His name was Leo McCarey.  The two were perfectly matched–both loved what they were doing; and films like All Wet, in which Charley manoeuvers his car into a water filled excavation pit and then proceeds to repair it underwater, showed the spark of comedy creativity that existed with the star-director team.

This spoof on the Tarzan movies was released at the time when the craze for the Weissmuller-O’Sullivan team was sweeping the country.  It is quite funny, but somehow it seems to promise more than it delivers.  One definite point in its favour is Muriel Evans, one of Charley’s favourite leading ladies, judging by the number of films they made together; her beauty, poise, and wry sense of humour wear extremely well in this particular film.

Christmas in July is Preston Sturges’ first variation on the illusion of success.  Dick Powell is the suitably bland hero surrounded by a maelstrom of frenzied character actors.  Franklin Pangborn is delightfully on the verge of collapse as a nervous radio announcer.  William Demarest holds off the world as one of a number of jingle judges, while Raymond Walburn quite surpasses any work of his in the past as a blowhard coffee tycoon.  In the sentimental section on tenement romance, Sturges unleashes an almanac of mannerisms about the guy in the street before building up to a wild, slapstick street riot and then peaking the story a few more times with a succession of surprise developments.

…this trick and wrily titled film, which is another of those one-man creations by Preston Sturges for Paramount, is just about as cunning and carefree as a comedy as anyone could possibly preordain…  Maybe you already know Mr. Struges from The Great McGinty and Remember the Night.  If so, you are aware how he can take a thin idea–a trite idea, even–and elaborate upon it with such fresh and eliptical fun that it suddenly seems important.  Thus, when we tell you that his hero in the present instance is a $20-a-week clerk who hopes to win a slogan contest paying $25,000, that the whole story has to do with nothing more than the things he does when he is deluded into thinking he has won it, then you’ll appreciate the wonder of the Sturges sleight-of-hand.  Out of such gossamer, really, he weaves a delightful comic fabric before your eyes.

How does he do it?  Well, through the creation of solid comic characters, for one.  His hero–and inevitable heroine–are just nice, honest youngsters, that’ all.  They want a break, so they can get married.  But against them are arrayed such a scatter-brained lot of practical jokers, business tycoons and gantlet.  Then Mr. Sturges contrives some wholly bewitching surprises.  Details are worked out with elaborate ingenuity.  Things pop when you least expect them.  He keeps you laughing with, not at, his youngsters.

And his performers are directed to perfection.  Dick Powell and Ellen Drew, neither of whom has ever been especially notable for dexterity, emerge as a couple of nimble and captivating babes in a madcap wood.  Raymond Walburn plays a big coffee merchant as though he were ripe for the nut-house.  Almost, but not quite–that’s the secret.  And ever so many other characters are given subtly distorted shape by Ernest Truex, Alexander Carr, Julius Tannen and–well, the rest of the cast.  As a creator of rich and human comedy Mr. Sturges is closing fast on the heels of Frank Capra….

Sturges was one of those perversely talented people (John Huston is perhaps another) who achieve a kind of total professionalism, while at the same time contriving to suggest their films have been tossed off more or less between drinks.

Sight and Sound by Penelope Houston

Preston is like a man of the Italian Renaissance: he wants to do everything at once.  If he could only slow down, he would be great; he has an enormous gift, and he should be one of our leading creators.  I wish he would be a little more selfish and worry about his reputation.

His (Preston Sturges’) work combines all those gnres–slapstick, crazy comedy, satire–that spring from the underlying common denominator, of explosive irreverence.  Yet Sturges appeals, not to any ideology, but to good old American horse-sense, and not to any moral perfectionism, but to everyday decencies.  More than almost any director of the timid, standardized war years, he trusted audiences to have the mental and moral agility  needed to follow his quickfire plots and patterns of sympathy through all their twists and turns.  Christmas in July begins with the well-tried theme of the young lovers who think they’ve won a huge prize (in this case for inventing the winning publicity slogan in a Maxford coffee competition).  A “big scene”, where two mean businessmen, Schwindel and Maxford, try to take presents back from a crowd of tenement children, is quite as openly anti-Republican as Sturges’ quiet puns on the word “democratic” in Hail the Conquering Hero.  But Sturges’ knack was in never losing his way through all the subsidiary conflicts which prevented this “confrontation” scene from being facilely “loaded”.  His likeable characters are full of faults and his dislikeable characters often abound in subtle redeeming qualities.  Thus the relationship between the quiet, contented heroine (Ellen Drew) and her madly ambitious boy friend (Dick Powell) is, particularly in the opening scenes, edgy to the point of harshness.  The menacing supervisor, who imposes exact timekeeping with the relentlessness that seems to sum up an entire system gives the hero a piece of stern advice about self-respect that liberates him from his overblown anxiety to be a success.  He seems to represent the “older” America, the America of stern, solid, modest inner-direction, as opposed to the more fluid, hectic, anxious, callous values of both the boss and the hero…Sturges’ picture of success-worship is particularly fair, when, for example, Powell’s boss, thinking he’s won the prize, enthuses over all his ideas, however bad.  But when told that Powell hasn’t won the prize after all, he immediately sneers at all the other ideas also.  Certainly, he’s petty and absurd in that all his enthusiasms are “unreal”, that he has no mind of his own and is lickspittle to success.  But he goes on to admit, frankly, the he’s no judge of whether the ideas are good or bad, he’s made mistakes before, another man’s status is all the guide he has.  There’s a great deal of truth in this about how, for example, financiers and film producers work, and Sturges puts it, not with the too-easy jeer, but with understanding; just as he understands the underlying guilt that makes a ruthless businessman keep up an unending stream of pompous, jittery self-justifications.  In Hail the Conquering Hero he contrives to have one minor character incarnate not only a dogmatic sentimentality about Momism but also a disturbingly callous violence, and–the hero’s bad conscience about pretending to be a tough hero.  By uniting these apparently distinct roles, he hints at their being deeply connected in the American psyche.  Sturges often refers to the fact (embarrassing to many Americans) that most of them are only one or two generations removed from being immigrants and foreigners.  For no other reason, Sturges’ characters may suddenly loose a German expletive (those were the war years, of course), while in the course of a discussion about families Franklin Pangborn suddenly says, “My grandmother was Lithuanian”.  (It’s just at this period that characterisation in American films is at its most standardised, as if audiences were trying to live down the cultural variety arising from their “foreign” roots).

Sturges’ films keep jabbing near the nerves of American life (ambition in Christmas in July, puritanism is Miracle of Morgan’s Creek, the cult of toughness in Hail the Conquering Hero).  With their high emotional voltage, they can swing from comedy to pathos, from sentimentality to bitterness, with one line of dialogue, or with one detail–like the disturbingly “real” bruised eye inflicted by the Mom-worshipper on his buddy–and Henry Fonda’s gruelling honeymoon with Barbara Stanwyck in The Lady Eve prefigures Wilder.  When he shows a mean Jewish Businessman, Schwindel, in Christmas in July, he has him ticked off by a poor Jewish “momma”, (i.e., “it’s not race, it’s class”) a message which he rubs in by having the “mean” Jew redeem himself by turning on the richer WASP businessman, Maxford.  Sturges can allow himself the box-office luxury of (highly implausible) happy endings without weakening the sarcasm of his comedy.  This is partly because, contrary to critical theory, the general audience doesn’t remember endings, it remembers “big scenes” and Sturges’ “big scenes” are “edgy” rather than reassuring.  But the happy ending of Christmas in July is so zany that it satirises itself.  The slogan-judging jury is finally persuaded, by one incredibly obstinate member, to give the prize to the worst slogan (the hero’s)–“If you can’t sleep, it isn’t the coffee, it’s the bunk”.  This theme hilariously prefigures Twelve Angry Men, and its moral seems to be that it’s the ornery, old-fashioned, individualistic idiots who sabotage business efficiency and so make America a happier place for young couples, ie.e, the spectator’s screen self.