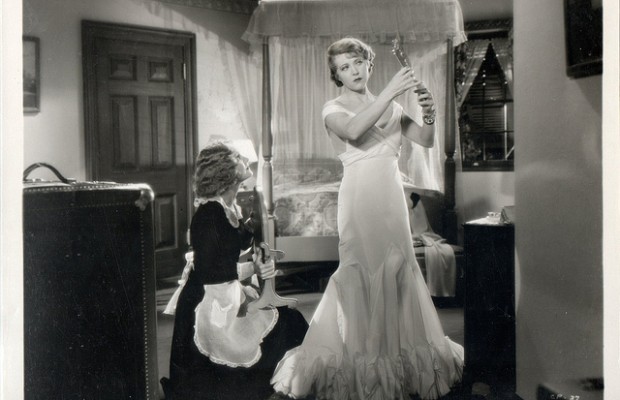 Toronto Film Society presented The Crash on Sunday, May 12, 2013 as part of Season 66 May Festival: The Pre-Code Weekend.

I don’t know much about this film and am looking forward to seeing it.  Interesting to note that Ruth Chatterton and George Brent were married in real life when making this film and were divorced by the time the movie came out.

This is the first of the Warner pictures involved in the product deal for the Roxy.  A weak picture, its principal merit is that it at least commands the personal following of Ruth Chatterton, which will

be attracted to the Cathedral while they might pass up the star in a lesser stand.

‘The Crash’ may arouse mild interest among femme fans, but for others it makes dull entertainment.  It’s an ambling narrative of how a parasitic wife with philandering habits reacted to the stock market panic.  It ends about where it began, at both of which points it is indefinite and in the meanwhile it meanders vaguely.  Admirers of Miss Chatterton will find in her playing nothing to add to her prestige.  Indeed, as a part, it is principally distinguished by an impressive parade of sumptuous clothes and little else.  George Brent’s role is still less attractive.

Picture release is timely anyhow, coming on the heels of the Chatterton divorce, which was abundantly aired in the public prints.  Circumstance that Brent has the lead opposite his bride may be the occasion of a flutter of feminine interest, although at the Roxy opening Thursday evening attendance didn’t promise much in this direction.

Seems reasonable to look for the picture to bring indifferent returns and go down in the records as an in-and-out Chatterton, which means less than that star’s average, but better than the run of program material, due to her marquee potentials.

Picture is a medley of inconsistencies, matching the character of its heroine, who never makes up her mind whether she’s a Becky Sharpe for clever intrigue or a loyal wife for self-sacrifice.  Even the author doesn’t take any clear attitude toward the character.  It is presented just as an inconsistent woman type and the audience reaction gets to the point of bored indifference.

At the beginning she is the butterfly wife supported in luxury by an apparently doting husband, who makes a living by playing the market on tips she gets from a rich man, who to all appearances is her lover.  She discards the source of her information because she’s tired of him and then invents a bull tip just before the market crash.  Husband goes broke by playing it and she walks out on him,

departing for Bermuda on her husband’s last funds to wait there until he gets on his feet.

In Bermuda she grabs herself a new admirer, a sheep rancher from Australia, upon learning that the husband has gone irreparably broke and returns to the States to divorce her mate in order to marry the new prospect.

Confronted with this situation, the husband raises a new stake by blackmailing the former sugar papa and the final passage of this tangled history is the contest of the two men for the woman.  The fadeout is a triumph of inconsistency, the woman deciding, for no clear reason, to abandon the Australian and resume life with her legal husband, although she learns of the blackmail coup.  She tears up the blackmail check but is quite complaisant about the blackmail itself.

The heroine appears to be entirely made up of author’s whims.  There may be women who flutter from inconsistency to contradiction and the character may be true to life, but it doesn’t make interesting drama and neither the author nor the actress has endowed it with incident or vitality to give it verity.  All you get from the screen is a blurred personality whose next move or ultimate fate evokes no strong sympathetic emotion.

Story falls down, then, because of the failure of its people to evoke any sympathetic spark.  Production has been given sumptuous technical accessories.  Atmosphere of elegance is extremely well conveyed in settings and the general tone of the picture.  The surroundings are flawless, but nothing happens in them to pique interest or capture sympathy or even provoke hostility.

Even though it has the advantages of Ruth Chatterton’s efficient acting and William Dieterle’s capable direction, “The Crash,” a pictorial story of Wall Street upsets in recent times which is now at the Roxy, is scarcely a stimulating piece of work.  It is an adaptation of a novel by Larry Barratto called “Children of Pleasure.”

Miss Chatterton portrays Linda Gault, the luxury-loving wife of Geoffrey Gault, a stock broker.  George Brent, Miss Chatterton’s husband, impersonates Gault and he is not nearly as effective as he was in at least two of his previous films.  Occasionally he speaks his lines awkwardly, which is not always astonishing, for the dialogue is sadly amateurish.

Soon after the opening episodes, Gault loses most of his fortune, chiefly because of untruthful information concerning the stock market given to him by Linda, who decides that the balmy climate of Bermuda would suit her better than the feverish atmosphere of New York.

While in Bermuda, where she goes with a $5,000 letter of credit, Linda meets Ronald Sanderson, owner of a sheep ranch in Australia, and not so very long afterward it strikes her that she would welcome a divorce from her husband and marriage to Sanderson.  Soon after she returns to New York she thinks of selling a string of pearls, but the amount offered to her by a dealer is hardly one-fifth of the value of the necklace.  Linda’s maid, Celeste, acting on the information her mistress was supposed to have received from a wealthy banker named John Fair, had caused trouble for her sweetheart, and to save him from imprisonment for embezzling office funds, she steals the necklace.  It is Linda’s last hope, but she refused to prosecute Celeste.

There are other ramifications to the tale, and finally Linda reconsiders her plan to run away with Sanderson and returns to Geoffrey.

Miss Chatterton arrays herself in several striking costumes during the unfurling of this narrative.  She gives an excellent performance, which is a decided point in favour of this production, but one that hardly atones for its many shortcomings.  Paul Cavanagh does as well as possible with the role of Sanderson, and Barbara Leonard is rather interesting as Celeste.  Henry Kolker succeeds in holding one’s attention by his interpretation of the part of John Fair, and Lois Wilson is pleasing as Marcia Peterson, who profits by the debacle of stocks.