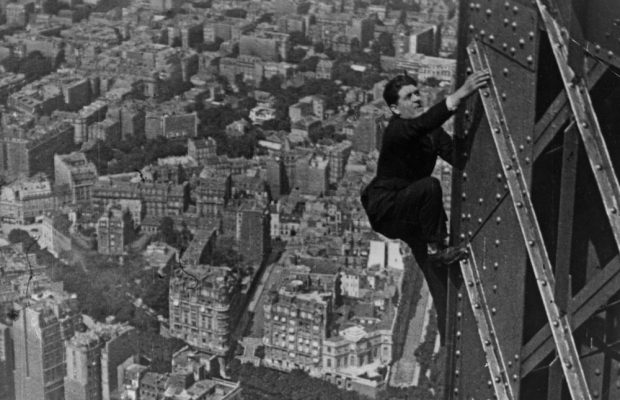 When he undertook his first independent film (at the age of 25), Rene Clair did so with the conviction that the French cinema had taken a wrong direction around 1907, and that the remedy was to turn back again for inspiration to its humble but pure beginnings, to the films of Melies and Zecca, and–above all–to playfulness, movement and unreality.  Paris Qui Dort was made with little money and under difficulties.  It is, in a sense, an amateur film.  Though it cannot be compared with Clair’s later work in  The Italian Straw Hat and Le Million, it remains a film of abiding interest.  Throughout the film, Clair continues to express his conviction that “the function of the cinema is to teach us to look“.  His wit and his best situations alike are only visual, though they may have emotional, even literary overtones.  Finally, the film’s delight in observation of human behavior (note the two sandwichmen trying to pick up a banknote) betrays Clair’s admiration for that pupil of Mack Sennett’s whose pupil Clair himself avowedly was–Charles Chaplin.

Clair’s humor and his feeling for the poetry of Paris suffuse everything.  The Eiffel Tower is the central personage of Paris Qui Dort.

Still probably his best scenario–the interplay of stillness and movement forms a sort of analysis and synthesis, a sort of demonstration by the absurd of what cinema consists of, a counterpart of Buster Keaton’s prodigious Sherlock, Jr.

Jacques Brunius in Experiment in the Film

This fairy tale of suspended animation mingled irony with its fantasy–recalled the lively American serials and the prewar comedies–but here comedy was transformed by imagination.

Bardeche and Brasillach: History of the Film

A foretaste of that leaning to fantasy which contributed so much to Clair’s later work and made him one of the outstanding directors of the French screen.