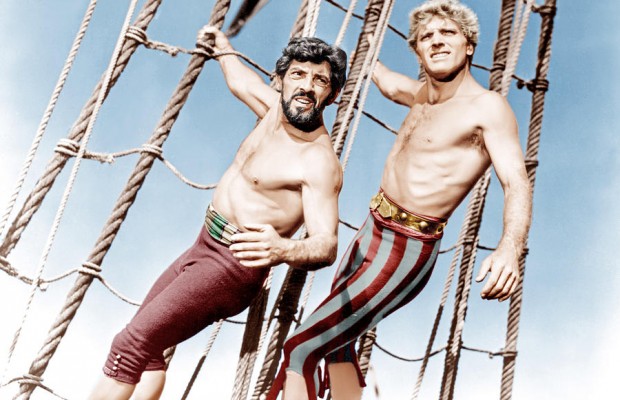 Toronto Film Society presented The Crimson Pirate (1952) on Sunday, March 20, 2016 in a double bill with The Mark of Zorro as part of the Season 68 Sunday Afternoon Film Buff Series, Programme 6.

Production
The film is set in the Caribbean, but was actually shot in England and the island of Ischia in Italy. The original screenplay by Waldo Salt was rejected by the producers on account of Salt’s Communist sympathies (McCarthy blacklisting was still in force). According to Christopher Lee, the film was intended to be a serious drama, but was turned by director Siodmak into a comedy in the style of a Boy’s Own Paper adventure.

Plot
Far too complicated to explain in a few lines. The story encompasses mutiny, rebellion, romance, betrayal, repentance, imprisonment, last-minute escapes, and unusual modes of transport, culminating, of course, in the victory of good over evil and a final embrace of hero and heroine.

Burt Lancaster (1913-1994)
Born in New York of Protestant working-class parents of Irish background. Lancaster was something of a “street kid” with a strong interest in gymnastics and basketball, in which he became a star in high school. He was accepted by New York University with an athletic scholarship, but dropped out. He formed a friendship as a teenager with Nick Cravat and they acted together in local theatre productions and circus acts, forming the acrobat duo Lang and Cravat and joining the Kay Brothers circus, until an injury forced Lancaster to give up the profession in 1939, though he remained a close friend of Cravat, who was featured in several of his films, including The Crimson Pirate. He took odd jobs as a salesman and waiter before joining the United States Army in 1942 and performing in a Special Services entertainment division, followed by regular army service in Italy in 1943-45.

After the War he appeared in a Broadway play where he attracted the attention of a Hollywood agent Harold Hecht, and, through him the Hollywood producer Mark Hellinger, who cast him in The Killers (1946), which brought Lancaster considerable acclaim, and was followed by “tough guy” roles in such films as Brute Force (1947) and Criss Cross (1949) and then one of his most famous performances in From Here to Eternity in 1953, followed by Elmer Gantry in 1960. In the meantime he had established a production company with Harold Hecht which was responsible for some of the finest American films of the 1950s and ’60s, often with Lancaster in a leading role, such as: Apache, Vera Cruz, Marty, Sweet Smell of Success, Separate Tables and Unforgiven. After the company was dissolved in 1960, Lancaster appeared in such distinguished films as Birdman of Alcatraz, Ulzana’s Raid, The Train, and Seven Days in May. His later career was notable for work he did with non-American directors–Luchino Visconti for The Leopard (1963) and Conversation Piece (1974), Bernardo Bertolucci for 1900 (1976), Louis Malle for Atlantic City (1980), and Bill Forsythe for Local Hero (1983). His last film was Field of Dreams (1989), and he also directed two films, The Kentuckian (1955) and The Midnight Man (1974).

He was marred thee times and claimed that he had an affair with Deborah Kerr while filming From Here to Eternity, though she denied this. Shelly Winters stated that she had a long affair with him, and he was also involved with Joan Blondell. Though he co-starred with Kirk Douglas in several films, they were–contrary to popular belief–never close friends and were often quite antagonistic. He was an outspoken liberal in politics and supported Eugene McCarthy, George McGovern, and Michael Dukakis in their unsuccessful presidential campaigns. He had a stroke in 1990 that left him partly paralysed and largely unable to speak, and died of a third heart attack in 1994 at the age of 80.

Robert Siodmak (1900-1973)
Directed his first film, the now classic Menschen am Sonntag (People on Sunday) in 1930 in his native Germany, in collaboration with his brother Curt, Billy Wilder, Edgar G. Ulmer, Fred Zinnemann and cameraman Eugen Schüfftan–all of whom, like Robert, left Nazi Germany in the 1930s and ended up working in Hollywood. Like some of them Siodmak detoured first to France, then moved to Hollywood in 1939, where he stayed till 1952, then returned to work in Germany with a brief return to Hollywood in 1967. The 23 films that he made in the US were mostly crime thrillers and melodramas, generally very popular, with several, such as the first version of The Killers (1946), The Spiral Staircase (1945), Christmas Holiday (1944), The Dark Mirror (1946), and Criss Cross (1948) now regarded as classics of film noir. He was also credited for either discovering or doing much to further the careers of such actors as Burt Lancaster, Ava Gardner, Olivia de Haviland, Dorothy McGuire, Yvonne de Carlo and Ella Raines.

Otto Heller (1896-1970)
Born in Prague, he worked as usher and projectionist in a cinema there, then became a cinematographer during and after the First World War, working on several silent films in Czechoslovakia and Germany. He moved to London in 1940 to escape the German annexation of his native country and became sought after there for his camerawork, both in black and white and colour, working on such films as The Queen of Spades, Laurence Olivier’s Richard III, The Ladykillers, and The Ipcress File.

James Hayter (1907-1983)
A well-liked character actor on stage and in film and television from the 1920s onward, performing mainly in comedy in roles such as Mr Pickwick in the 1952 The Pickwick Papers and Friar Tuck in two Robin Hood films. [N.B. I include him here for purely nostalgic reasons because he was a former pupil of the school I attended in Scotland in the 1950s, where I first encountered him as Mr. Pickwick].