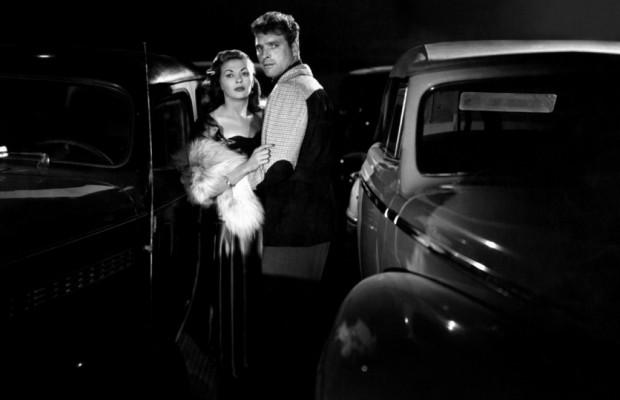 Romantic, obsessive Steve Thompson is drawn back to L.A. to make another try for Anna, his former wife. However, Anna belongs now to the L.A. underworld. Steve believes he can rescue her, ignoring the advice and warnings of people who would try to save him. He commits himself to a dangerous course of action that quickly takes everyone somewhere unintended.

Shot largely on location in Los Angeles, it has been called [by Dennis Schwartz] “a cynical film noir of obsessive love and betrayal. It’s 1940s film noir at its most influential as far as style goes, that is further enhanced by the beautiful dark photography of Frank Planer, the tight script by Daniel Fuchs, and the taut pacing by Siodmak [who] keeps the suspense at a feverish pitch, and the characterizations are well drawn out. Criss Cross is one of the great examples of 1940s film noir at its most tragic. A must see film for fans of the genre.”

Another critic [Tom Hehenberger] considers it “a very fine textbook rendering of the genre”, with Lancaster “almost pitch perfect as  the lovesick schmuck Steve combining a right mixture of toughness with a sensitivity that echoes Bogart in his prime”, while “tasty Yvonne De Carlo is the black widow who uses her sex appeal and vulnerability as a way of claiming power and emasculating the powerful men who she welcomes into her snare.” And Dan Duryea is perfect in his typical role of the sleazy gangster whose insanity is hidden in an almost likeable, laconic approach, making him a slightly comic foil to Lancaster’s “All American Football Star”.

Chicago Reader’s Dave Kehr found it “an archly noir story replete with triple and quadruple crosses, leading up to one of the most shockingly cynical endings in the whole genre”, that left it open, as another critic put it, whether Anna is “shallow minded, a victim, or just a conniving classic femme fatale.”

Born in Manhattan of Protestant working class parents who were of Irish descent, he was very athletic as a child and particularly skilled in gymnastics and basketball. At the age of 18 he became involved in local theatre and acrobatic circus acts and joined the Kay Brothers circus until an injury in 1939 forced him to look for other work. He served in the US army during World War II and then returned from service to become involved in acting, first on Broadway and then in films, where his performance in The Killers, directed by Robert Siodmak in 1946, brought him considerable acclaim, and was followed by mostly adventure and action films such as The Crimson Pirate (1948) and The Flame and the Arrow (1950). With his performance in From Here to Eternity in 1953, he moved into the top echelon of Hollywood actors and formed his own production company, Hecht-Hill-Lancaster with producer Harold Hecht and writer James Hill. The company was responsible for some of the finest American films of the following decade, such as Apache (1954), Marty (1955) and Sweet Smell of Success (1957), in several of which Lancaster also acted. In 1960 he won the Academy Award for best actor for Elmer Gantry and in his later career he worked in Europe with Bernardo Bertolucci (for Novecento) and especially Luchino Visconti, for whom he gave perhaps his finest performance in The Leopard (1963). He also fostered the career of director John Frankenheimer and appeared in five of his films, including Seven Days in May and The Train (both 1964). He acted with Kirk Douglas in seven films, but the two men were never close friends. His last film was Field of Dreams in 1989; he suffered a stroke in 1990 that left him partly paralysed, and he died at the age of 80 in 1994.

He was married three times and twice divorced and shunned publicity concerning his private life. He was a staunchly liberal Democrat who opposed the Vietnam War and McCarthyism and regularly campaigned for Democratic presidential candidates in 1968, 1972 and 1988.

Born of Jewish parents in Dresden, Germany, he entered the film industry in 1925 and in 1929 made the classic silent film People on Sunday (Menschen am Sonntag) in collaboration with his brother Curt, Billy Wilder, Fred Zinnemann, Edgar G. Ulmer (all of whom, like Siodmak, left Hitler=s Germany to become directors in Hollywood), and Eugene Schüfftan, the inventor of the special effects known as the Schüfftan process, who also worked in America. Siodmak made 23 films in the U.S. most of them thrillers and adventure films and is most closely associated with the classic films noir that he made in the 1940s, such as The Killers, Phantom Lady, Cobra Woman, Cry of the City, The Spiral Staircase, The Dark Mirror, and Christmas Holiday (Deanna Durbin’s most successful feature and the one she considered her only good film). He returned to Germany in 1952 and made several films there before one final American film, Custer of the West in 1967.

Born Margaret Yvonne Middleton in British Columbia, she adopted her French mother’s maiden name of De Carlo for professional purposes. Her father abandoned the family when she was three and she was brought up by her Italian grandparents. Her strong singing voice encouraged her mother to take her to Hollywood, but immigration and citizenship problems led to her deportation to Canada. Finally allowed to re-enter the US,  she landed a role as a bathing beauty in the 1941 Harvard, Here I Come, which led to other screen appearances, including a popular musical, Salome, Where She Danced, in 1945. Her first important role was in Criss Cross opposite Burt Lancaster, which was followed by several appearances in television shows and the films The Captain’s Paradise (1953) and Cecil B. DeMille’s The Ten Commandments (1956), where she had the role of Moses’ wife. Her later work was largely in television, particularly the sit-com The Munsters, and various stage musicals. She suffered a minor stroke in 1998, and spent her last years in the Motion Picture and Television Hospital.

Born in White Plains, New York and graduating from Cornell University with a degree in English in 1957, Duryea had to overcome his parents’ opposition to pursue a career in drama, which he achieved in the 1930s with Broadway roles in Dead End and The Little Foxes. He then moved to Hollywood where he had a small role in the film of The Little Foxes, and followed this up by a succession of memorable supporting roles in crime and Western films as a thoroughly despicable, yet somehow fascinating “man you love to hate” who lacked even a shred of moral decency–a characterisation very different from his actual personality as a happily married father of two sons who loved gardening and commanded a Boy Scout troop.   His later career in both film and television allowed him occasional more sympathetic roles, but it is as the “sniveling, deliberately taunting” character in such films as Scarlet Street, The Woman in the Window, Ball of Fire and Winchester ’73 that he will be best remembered.

A major composer of almost a hundred film scores, he was born in Budapest to parents who loved both classical and folk music and he himself showed early talent both as performer and composer. He studied music in Germany and began a career as composer there and in Paris, before being introduced to film music by his friend the composer Arthur Honegger. He moved to London and produced his first film score for his fellow Hungarian Alexander Korda’s Knight Without Armour and then followed Korda to Hollywood where he received an Academy Award nomination for The Thief of Bagdad in 1940. He subsequently worked on Alfred Hitchcock’s Spellbound, for which he obtained his first Oscar, though Hitchcock found the music too obtrusive and Rózsa never worked for him or David Selznick again. He collaborated more happily with Billy Wilder, Jules Dassin and for MGM and also enjoyed a successful career as a composer of classical concertos and choral music.

Born in what is now the Czech Republic, but was then part of the Austro-Hungarian Empire, he trained as a painter and then switched to photography and worked in the German and Austrian film industries before leaving for Hollywood in 1937, where he shot over 130 movies. His films include Letter From an Unknown Woman (1948), The Big Country (1958) and Breakfast at Tiffany’s (1961).