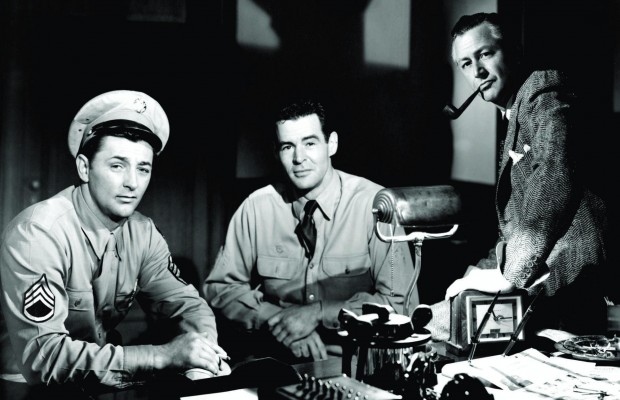 Police investigator Finlay, investigating the brutal murder of Joseph Samuels, discovers that the murderer might be among a group of demobilised soldiers seen with him in a hotel bar. Meanwhile, Sergeant Kelly, concerned that his friend Mitch may be suspected, also decides to investigate. Each of the suspected soldiers gives his version of the night’s events in flashback, as does Ginny, a potential witness. Finlay and Kelly piece together the events of the night and discover a possible motive for the crime, which prompts Finlay to set a trap to expose the killer.

The film was reviewed very positively by Variety and The New York Times, both of whom  praised it as a brave, hard-hitting attack on bigotry and racial prejudice, although the original source of the film, the novel by Richard Brooks (later a distinguished film director) dealt with homophobia, a taboo subject for Hollywood at the time, rather than anti-Semitism, a more acceptable post-World War II topic (also the subject of Elia Kazan’s near contemporary Gentleman’s Agreement). Dmytryk’s direction, for which he received an Oscar nomination, was highly praised, as was the acting of the “three R’s”–Ryan, Young, and Mitchum–and the performance of Gloria Grahame. Recent critics, while also praising the film, have emphasised the moody, atmospheric photography of veteran cameraman J. Roy Hunt, and have indulged in some debate as to whether the film should be classed as “noir” or a socially conscious “message” film. Although James Agee the critic of the time whose opinions have lasted better than any of his contemporaries, called it “the best Hollywood movie in a long time”, he had reservations about how genuinely brave its subject matter was, pointing out that “at best, Hollywood’s heroism is calculated to land buttered side up [and] movies about anti-Semitism aren’t so desperately chancy, after all.” “All that aside, however,” he concluded, “Crossfire is an unusually good and  honest movie and may–I hope, will–prove a very useful one.”

Born in British Columbia of immigrant Ukrainian parents. The family moved to California after the mother’s death in 1913 and the youngster quickly supported himself by doing odd jobs for the Famous-Lasky Players studio, graduating to editorial status in the early 1930s and then to full time work as a director for RKO in 1942, where he specialised in action thrillers such as Murder, My Sweet (1944), Cornered (1945) and Crossfire, among others before being denounced as a Communist by director Sam Wood and hauled before the House Un-American Committee for questioning. He refused to answer the committee’s questions and was blacklisted as one of the famous “Hollywood Ten” and moved for a time to England, where he found work as a director. On returning to America he was briefly imprisoned before agreeing to testify against some of his fellow workers in the film industry–a move that aroused considerable antagonism, but allowed him to resume work in Hollywood. He was supported by producer Stanley Kramer and made several films for him, including the commercial and popular success The Caine Mutiny in 1954, followed by Westerns such as Broken Lance and Warlock, and The Young Lions, with a World War II setting and a fine cast that included Marlon Brando and Montgomery Clift. Less distinguished work in the 1960s included lurid melodramas based on the bestsellers of Harold Robbins, and films in England and Italy before he retired in 1976 to teach filmmaking at various US universities and to write books on directing and screenwriting.

Born in Chicago, his family moved to Los Angeles where he began to appear in bit parts in silent films before being signed by MGM and making his sound film debut in 1931 after which he appeared in over 100 films between then and 1952. Most of this work was as a contract player in B movies, sometimes making eight films a year, though often with leading actresses of the time. When his MGM contract ended he worked for several other studios in more demanding roles, both in light comedies and serious dramas, including several films directed by Frank Borzage (Three Comrades, The Shining Hour, The Mortal Storm); but, as a freelancer, he lacked sustained support from a major studio and his career began to decline after the early 1950s until it revived in popular television series such as Father Knows Best and Marcus Welby, M.D. He nursed considerable bitterness towards Hollywood for not making better use of this talents and, towards the end of his life suffered from depression and alcoholism and attempted suicide in 1991. Later, however, he helped to support mental health programmes in his home state of Illinois.

“A gifted, intelligent and powerful actor”, a liberal Democrat and pacifist, a tireless supporter of civil rights and racial equality, and a strong opponent of McCarthyism, Ryan was paradoxically best known for roles depicting, as put it, the kind of character that in real life he found totally despicable. After  graduation from Dartmouth College, where he was the school’s heavyweight boxing champion every year, he worked as a ranch hand and ship’s stoker before taking small roles in film and on stage in the early 1940s and becoming a drill instructor for the Marine Corps. There he became friendly with Richard Brooks, author of the novel The Brick Foxhole which was made as the film Crossfire, in which Ryan had his breakthrough film role. He followed this with major work in many of the finest films and for many of the finest directors, of the next three decades–Nicholas Ray, Anthony Mann, Robert Wise, Samuel Fuller, Fritz Lang, John Sturges, Robert Aldrich, Richard Brooks and Sam Peckinpah–in such films as On Dangerous Ground, The Set-Up, The Naked Spur, Bad Day at Black Rock, The Dirty Dozen, The Professionals, and The Wild Bunch. He also acted on stage, mostly for Off-Broadway productions and regional theatres, and for television (though always as a guest star and never in a series, where he might, as he put it, end up being typecast as “Sidewinder Sam” for the rest of his life.)

Rightly described as “an underrated actor of enormous ability who sublimates his talents beneath an air of disinterest”, Mitchum was one of the finest of all American film actors. Despite a deceptively laid-back and casual attitude to his work, he was totally professional, hardworking, and committed to his acting, and appeared in several of the best and most challenging films of the 1940s and 1950s, specialising in films noir, thrillers and Westerns, but in most other genres as well.

He was born in Connecticut to a mother who was  the daughter of a Norwegian immigrant and sea captain, and  a father who was a shipyard and railroad worker, who died in an accident when his son was two years old. He had a rough and ready childhood, shuttled around between relatives, and was often in trouble with authorities. He was expelled from high school at the age of 14 and travelled the country during the Depression years on railroad cars as one of “the wild boys of the road”, taking whatever odd jobs he could find, at one point being arrested for vagrancy in Georgia and put on a chain gang, from which he claimed to have escaped, and after which he returned to his family. In 1936 his sister Julie introduced him to a theatrical career and he worked as stagehand and occasional bit player for some years. He married and had a child and worked for a time for the Lockheed Aircraft Corporation, but, bored with a conventional existence, he turned to the movies and appeared in several Hopalong Cassidy B-movies in 1942 and 1943, among other films. After attracting attention for his role in Thirty Seconds Over Tokyo in 1944, he signed a contract with RKO. and made several Westerns for the company.

Next he appeared in The Story of G.I. Joe for United Artists, for which he received the only nomination of his career for an Oscar, after which he was drafted into the military till the end of the War. The late 1940s and the 1950s brought some of his finest work in film noir and Westerns–sometimes, as with Blood on the Moon a mixture of the two–where “his unique blend of strength, slow-burning sexuality and devil-may-care attitude helped to make him the personification of the noir hero.” Undercurrent, The Locket,  Pursued, and, especially, Out of the Past, remain classics of the genre, thanks largely to his performance in them. An unwelcome interlude in this period brought him an arrest for possession of marijuana in 1948, followed by some time in jail and a prison farm. The conviction was later overturned after it was exposed as a set-up and it did not seriously affect his career He continued his primary role as an anti-hero into the many films he made in the 1950s, several of which stand out–The Lusty Men, Angel Face, River of No Return, Track of the Cat, Heaven Knows, Mr. Allison, and, above all, Charles Laughton’s directorial masterpiece Night of the Hunter, which gave him one of his finest roles as a crazed and murderous fake preacher.

The 1960s and 1970s were more uneven, though again a few films remain memorable: The Sundowners (for which he received the National Board of Review award for Best Actor), Home From the Hill, Cape Fear, The Longest Day, El Dorado, Ryan’s Daughter, The Friends of Eddie  Coyle, The Last Tycoon, and two remakes of novels by Raymond Chandler, in which he played a near-perfect Philip Marlowe–the excellent Farewell, My Lovely and the terrible The Big Sleep. He also had a small role in Martin Scorsese’s 1991 remake of Cape Fear. In addition he worked extensively  in television during his final two decades.

Born Gloria Grahame Hallward in Los Angeles, her mother was a stage actress and acting teacher who gave lessons to her daughter, who dropped out of high school to pursue an acting career and was spotted by Louis B. Mayer in a Broadway performance. This led to a contract with MGM and the main role in the 1944 film Blonde Fever. Her performance as the promiscuous Violet in It’s a Wonderful Life when she was on loan to Columbia brought much acclaim, but MGM felt she did not fit their star pattern and sold her contract to RKO., where she made some forgettable films before being nominated  for an Oscar in Crossfire.  Further success followed in The Greatest Show on Earth (1952) and The Bad and the Beautiful (also 1952) for which she did receive an Oscar, and she did conspicuously good work in other films of the early 1950s, such as The Big Heat and Human Desire for Fritz Lang and In a Lonely Place, directed by Nicholas Ray, who she had married in 1948, though they were soon divorced after Ray found her in bed with Anthony, his 13 year old son from a previous marriage (she married Anthony in 1960 and divorced in 1974). In the meantime she was badly miscast in Oklahoma! in 1955 (she couldn’t sing) and her career began to spiral downwards despite good work in Odds Against Tomorrow in 1959, and she returned to stage and television for most of the rest of her career. She was constantly worried about her appearance, resorting to plastic surgery and other supposed cosmetic remedies that rarely had any beneficial effect, and she was often unpopular with her fellow actors, who found her difficult and self-centered. She died from peritonitis at the age of 57 following a botched operation on her stomach.