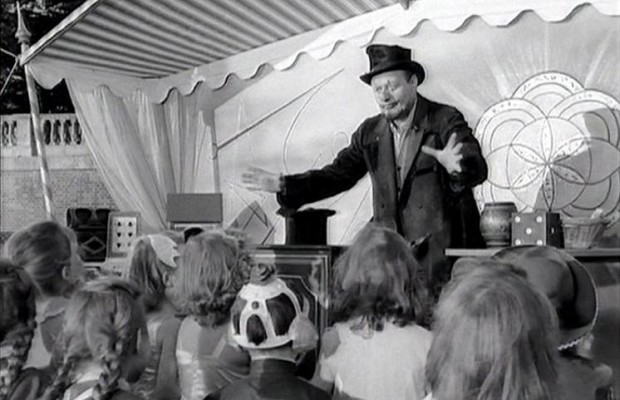 Toronto Film Society presented Curse of the Demon (1956) on Monday, April 7, 1980 in a double bill with The Sheepman as part of the Season 32 Monday Evening Film Buff Series, Programme 8.

John Holden, an American psychologist comes to visit Professor Harrington, who, it turns out, has died while investigating a fake devil cult operated by Dr. Karswell.  Befriending the late Professor’s daughter, Holden begins to investigate Karswell in an attempt to both prove him a fraud and connect him with Harrington’s death.  It soon appears that Karswell may not be a fake, and he slips Holden a piece of Runic script which assures the holder of a quick and painful death within a prescribed period of time.  Holden and Joanna unite against Karswell and desperately try to return the parchment before time is up.

Jacques Tourneur was the son of the French director Maurice Tourneur.  Although a naturalized American citizen, he began his film work in France as an editor and assistant to his father on six films and directed four films himself between 1931 and 1934.  Returning to the USA in 1935, he worked as a second unit director.  Filming the storming of the Bastille for A Tale of Two Cities, he worked under second unit producer Val Lewton.  This turned out to be a happy meeting.  In 1942 Lewton was asked to head a horror film unit at RKO.  This unit was to produce a series of low budget films to fill the bottom of double bills.  Tourneur directed the first three, The Cat People (1942), I Walked With a Zombie (1942) and The Leopard Man (1943).  Due to a combination of budgetary constraint and artistic sense, the two men evolved a style which gave their films a value far beyond that of most B films.  Several of Lewton’s films are regarded as horror classics today and Tourneur used this style effectively in other films, particularly Curse of the Demon.

The essense of this style which these men brought to the horror film was an emphasis on understatement, on the play of light and shade and on suggestion rather than overt presentation.  This was of course largely a function of the budgets they had.  It is much cheaper to play with lighting and sound than to create elaborate monsters.  However, there was an additional emphasis on the psychological aspects of fear which makes a deep impression on the viewers of these films.

In Curse of the Demon we are presented with a primal fear: ancient, mystical religions so powerful that they are able to conjure up evil in a solid, three-dimensional form and are further able to control that evil and use it.  This is a fear which strikes at the very root of our rational being.

John Holden is the representative of rational man.  He is a scientist.  More importantly, he is a man of modern science–a psychologists.  He comes from the United States, the home of scientific rationalism.  In the film he is out of his element, geographically and intellectually.  A visitor in a country with a mythic history, he finds himself in a struggle with enemies who defy rationalization.

Dr. Karswell demonstrates his abilities in a powerful scene.  Playing a clown at a children’s brithday party he seems totally harmless.  Yet he is able to conjure up a sudden windstorm of frightening proportions.  This scene is effective because Tourneur plays against type, making daylight and a children’s party turn ominous and threatening.  Other moments in the film gain their impact from their subtlety and suggestiveness, such as when Holden is attacked by a panther or by shadows or perhaps only by his imagination.  The appearance of the demon from a sparkling cloud is a fine moment in the film.  As Carlos Clarens wrote: “Night of the Demon abounds in prosaic situations turning implacably into nightmares.  Every flourish is a touch not underlined but understated, ellipsed and just suggested.”

Unfortunately, in several of his films Tourneur’s work was undercut by his producers.  Extra material was shot and inserted without his knowledge and consent.  In Curse of the Demon, some ridiculous close-ups of a demon’s head was added which mar an otherwise fine film.  This is certainly a film which deserves to be shown more often than it has been.