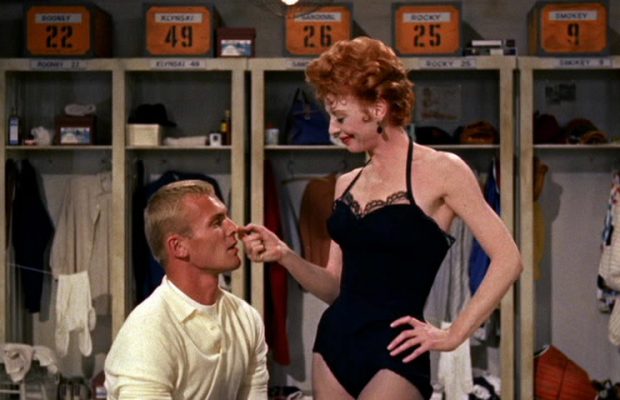 Toronto Film Society presented Damn Yankees (1958) on Sunday, April 28, 2019 in a double bill with The Pajama Game as part of the Season 71 Sunday Afternoon Special Screening #10. 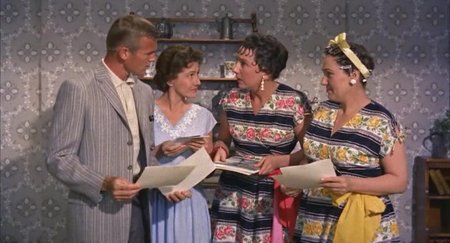 Damn Yankees is a film adaptation of the award-winning Broadway musical. Much of the Broadway principal cast was used in the film, other than Stephen Douglass, who was replaced by screen actor Tab Hunter. The film is based on the German legend of Faust, a man who trades his soul to the devil’s representative, Mephistopheles, in return for unlimited knowledge and worldly pleasures. The devil and Mephistopheles have been portrayed by many fine actors, over the years, and not a few mediocre actors, as well. The alumni list includes Emil Jannings as Mephisto in Faust (1926); Walter Huston as Mr. Scratch in The Devil and Daniel Webster (1941); Laird Cregar as His Excellency in Heaven Can Wait (1943); Claude Raines as Nick in Angel On My Shoulder (1946); Ray Milland as Nick Beal in Alias Nick Beal (1949); Peter Cook  as George Spiggott in Bedazzled (1967), also produced by Stanley Donen; Elizabeth Hurley as The Devil in the abysmal 2000 remake of Bedazzled; as well as actors Al Pacino, Jack Nicholson, Max von Sydow, Viggo Mortensen, and Peter Fonda. Even comedian Rodney Dangerfield had his turn as Lucifer in the horrible Adam Sandler film Little Nicky (2000). And he wondered why he got no respect.

In Damn Yankees, the Mephistopheles character is named Mr. Applegate and played by Ray Walston with dancer/actress Gwen Verdon as his assistant, Lola. Walston and Verdon worked so well together, in their respective roles in Damn Yankees, that they received critical acclaim and won Tony Awards—for Best Performances by a Leading Actor and Actress in a Musical, respectively. Herman Raymond Walston was born on November 2, 1914 in Laurel, Mississippi and the family moved to New Orleans in 1925. He started acting at a young age, working as a background extra in stage productions as well as selling tickets and cleaning stages. In 1938, he moved to Dallas, Texas and joined a repertory theatre company run by regional theatre pioneer, stage director, and producer Margo Jones. It was while working for Ms. Jones in Huston, Texas that he met his wife of 52 years, Ruth Calvert.

Ray Walston was very popular with Margo Jones’ troupe of actors but eventually moved to Cleveland. He spent three years with The Cleveland Playhouse, further honing his acting skills. He moved to New York and worked in theatre, eventually gaining a role in Shakespearean actor Maurice Evans’ 1945 production of G.I. Hamlet. It is Shakespeare’s Hamlet, but Evans made changes to the timing by cutting and clarifying scenes in order to appeal to a military audience. He made Hamlet more of a rough and ready character, not the introspective prince that Shakespeare had created. It proved quite popular with WWII audiences.

In 1948, Walston became one of the first members of the newly-formed Actors Studio. His fellow actors included, among others, Marlon Brando, Montgomery Clift, Julie Harris, Karl Malden, Eli Wallach, David Wayne, Kim Hunter, and Jo Van Fleet. He continued to work on Broadway, in productions of The Front Page, Summer and Smoke, King Richard III, House of Flowers, and the Pulitzer Prize winning There Shall Be No Night. He also appeared in a non-singing, non-dancing role in the Rodgers and Hammerstein musical Me and Juliet. As well as reprising his Broadway role in the film version of Damn Yankees, Ray Walston did the same for South Pacific, as the character Luther Billis.