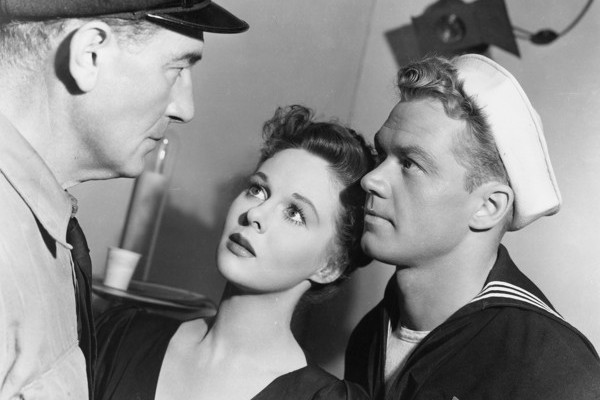 Toronto Film Society presented Deadline at Dawn (1946) on Monday, September 28, 2015 in a double bill with The Dark Corner as part of the Season 68 Monday Evening Film Buff Series, Programme 1.

Deadline at Dawn was generally liked on its release, except by its director. In his autobiography, “All People Are Famous”, Mr. Clurman—a noted stage director whose only movie this was—writes: “I will not speak of Deadline at Dawn, a run-of-the-mill RKO movie I directed in 1945, for which Clifford Odets as a favor to me wrote the screenplay. What I remember best about the enterprise is the appearance of someone from the Johnson (censor’s) office to protest that Susan Hayward was showing too much cleavage; both Miss Hayward and I insisted that this was one of the more pleasing features of the picture. Miss Hayward, meeting me in the late sixties, took care to assure me that she had become rich and was about to make her first stage appearance.”

Bill Williams was an entirely likeable, if rather lightweight, leading man of the 1940s (Till the End of Time, Those Endearing Young Charms, etc.), whose career soon reduced him to the leads in “B” pictures plus supporting roles in some “A” movies. He and his wife, Barbara Hale, produced a son whose professional name is also his father’s real one—William Katt. The young man was widely noticed, this film season, as the only pleasant character of Brian de Palma’s peculiar Carrie. Underneath a great deal more hair, he looks a lot like his dad.

Deadline at Dawn, a melodrama about an ingenious sailor’s effort to clear himself of murder, is Harold Clurman’s direction of a script by Clifford Odets. Some of Clurman’s direction is pure stage—some of which comes through very well; some of Odets’ writing is pure him. At its worst, the picture is guilty of pseudo-realism and pseudo-poetry about the lost little people of a big city. But on the whole, I think it is a likeable movie. Odets…is obviously one of the very few genuine dramatic poets alive. And his good bits, to say nothing of his bad, are handled competently by Susan Hayward, disarmingly by Bill Williams, and beautifully by Paul Lukas.

[In Deadline at Dawn,] a young sailor on leave in New York City gets involved with a bunch of crooks in a poker game at a place called Bartelli’s. Edna, Bartelli’s sister, lures him to her apartment and slips him a mickey. When he wakes up, he finds over a thousand dollars in his pockets, and believes he took it from the girl’s apartment. The sailor, Alex (Bill Williams), wanders the city and finds a beautiful girl named June (Susan Hayward) in a dance hall. The girl is tired of her life [and] rather cynical, but is charmed by Alex and decides to help him return the money to Edna. Unfortunately, they find Edna has been murdered. Gus (Paul Lukas), the cabdriver who took them to Edna’s apartment, offers to help them find the murderer and prove Alex’s innocence. Things become further confused when Mrs. Raymond breaks into the apartment to steal some letters accusing her of an illicit relationship with Lester Brady. Alex has only a few hours left before his leave is over, so Alex, June, Bartelli, and Lester hold a sort of movie version of [the game] Clue to discover the murderer’s identity.

Reviews for Deadline at Dawn were mixed. Bosley Crowther, in The New York Times, said, “Plainly, the first essential of a first class mystery film is that it catch and excite audience interest in the telling of its uncertain tale. And the longer it keeps the audience guessing, the more intriguing it is likely to be. Those two desirable essentials are eminently satisfied by RKO’s latest thriller, Deadline at Dawn.” On the other hand, “Motion Picture Guide” described it as “a mish’mash” and Variety described it as “arty” and having “bookish English, as if out of Shakespeare, which doesn’t ring true”. This was the first role in which Susan Hayward was top billed, and her first for RKO. She had taken 1945 off after she [had] had twin sons, and was scheduled for The Razor’s Edge, but Ann Baxter got the part. The Razor’s Edge marked Tyrone Power’s return to film after World War II, and Susan Hayward would go on to star with Power twice in the next few years.