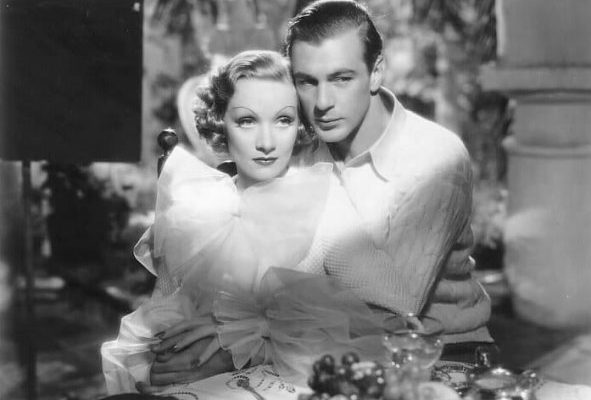 Marlene Dietrich became a friend, confidante and, intermittently, lovers with John Gilbert, who had a serious drinking problem.  They wanted to team up together and decided that the suave supporting role of Carlos in The Pearl Necklace would be the perfect vehicle. Writers at Paramount worked on the script under the watchful eye of Ernst Lubitsch, but as he was the studio’s head of production, he assigned Frank Borzage to direct. Lubitsch changed the name to what he felt was the snappier title of Desire. Its eventual story-line was squarely aimed at Depression America.

Borzage had been a director for years. Born in Salt Lake City to Swedish parents, he directed his first film in 1916, when he was 23 and went on to become on of the most highly regarded directors of the Twenties and Thirties. He won the first-ever Oscar for Direction for his 1927 film Seventh Heaven and won the same award five years later for Bad Girls.

John Gilbert tested for the role of Carlos, and to his and Marlene’s delight, won the part. And the major male role, the Detroit motor-engineer Tom Bradley, went to her old co-star and lover, Gary Cooper. This was unfortunate for Gilbert. When she met Cooper again, Marlene found her old desire for him rekindled. It was true that he had recently married a society lady, and that Lupe Velez was rumoured to still have her eye on him, but nonetheless he and Marlene resumed their affair. Gilbert found this devastating. Marlene had become his confidante and support and with her off cavorting with Gary Cooper he quickly drifted back to the bottle for consolation which caused him to have a series of small heart attacks. This caused Paramount to remove him from the film and was replaced by John Halliday, which was a shame because although Halliday was a good actor, he did not have much sexual charisma, and a theme in the plot of Desire was to have been his jealousy as Madeleine’s love for Tom became more apparent. This theme now disappeared.

Marlene Dietrich Desire began shooting in September 1935. It was eventually decided to film it in black-and- white, rather than Technicolor, but this did nothing to detract from Marlene’s beauty. She appears in an endless succession of glamorous outfits and looks ravishing in all of them. She directed much of her own lighting in the film, as well as some of Gary Cooper’s.

But compared to her appearance in her von Sternberg films there is something smoothed-out about her. Although ‘the most elegantly amusing jewel thief ever’ (in the words of New Yorker critic Pauline Kael), she is simply a highly glamourised version of the girl next door. She has lost all her Berlin disillusion, so her mockery is lighter and more conventional. A dozen Hollywood actresses of the time could have played the role as well, and the film is in effect an early specimen of Thirties screwball comedy, with a rich irresponsible beauty finally finding married happiness. That being said, the film is good entertainment, helped by an excellent lively score by Frederick Hollander, Freidrich Holländer’s new Americanised name. He wrote four songs for Marlene to sing, with lyrics by Leo Robin, although as things turned out she sang only one of them, ‘Awake in a Dream’, which she performs at the piano to a lovestruck Gary Cooper.

Dietrich, A Biography by Eon Wood

When I read Ernst Lubitsch’s screenplay for Desire, I was horrified. The film was to begin with a close-up of my legs. My legs, always my legs! Yet for me they have only one purpose, they make it possible for me to walk. I didn’t want so much fuss made over my legs. But Mae West advised me to take another view of the matter and to let the producers have their way. She always had a thousand good reasons for her opinion, and I listened to her. So the film Desire begins with a close-up of my legs. It’s an extraordinary film and could have dispensed with such a beginning.

Josef von Sternberg’s decision, against my will, to terminate our collaboration-to which the studio executives probably also contributed-marked for me the beginning of a long series of mediocre films. “If you leave Hollywood now,” said von Sternberg, “The whole world will believe you have done so only because of pressure from me. You must continue to work here.”

I made the films that followed without great conviction, to put it mildly.

Rouben Mamoulian was a very good friend and took me as I was. Others, too. The only film I need not be ashamed of is Desire, directed by Frank Borzage and based on a script by Ernst Lubitsch. I found Gary Cooper a little less monosyllabic than before. He was finally rid of Lupe Velez, who had been at his heels constantly throughout the shooting of Morocco.

Desire became a good film and, moreover, also proved to be a box office success. The script was excellent, the roles superb-one more proof that these elements are more important than actors. But even before Desire became a hit at the box office, we made another film (that’s how it is in the film business), one that was not so good: Angel. Ernst Lubitsch was responsible for the script and was the director. Our morale was restored when Desire was shown in movie houses all over the world.

Dietrich’s “emancipation” is immediately evident in Desire. “For the first time [in an American film],” wrote Frank Nugent in the New York Times, “she is permitted to walk, breathe, smile and shrug as a human being instead of being a canvas for the Louvre”–a snide reference, perhaps, to a Paramount publicity photo which superimposed Dietrich’s enigmatic features on the Mona Lisa’s. Dietrich found Desire a liberating experience. It was a present-day story, to start with, and lighter in tone than any she had been used to since her German comedies. Borzage was a director with no interest in touching any of the darker bases of sexuality. The mood of the film was engaging: it wanted to make its people likable; and since the slight story weighed no one down, the cast responded with spirit.

Dietrich always called it the easiest film she ever made and her reasons, significantly, harked back to the days of subordination she had suffered under von Sternberg. “Until Desire, I have always had to conceal my feelings and still show that I loved the man, whoever he was. This is the most difficult thing of all. Nothing is easier to play than straight sentiments. Mr. von Sternberg never let me play love scenes–not ordinary ones, I mean, with hugging and all that, because he hates ordinary love scenes. In Morocco, Gary Cooper was supposed to kiss me, but behind a fan. That was all.” Desire thus broke another taboo that predated von Sternberg: namely the slap on the face that Dietrich’s mother had delivered when her daughter turned up her nose at dancing with a boy she didn’t like. At long last she could show her feelings without being accused of bad manners.

The film’s production values also helped a “new” Dietrich emerge. Travis Banton, the studio’s brilliant wardrobe designer, gave her a simpler line, producing a cuisine minceur effect in dress where formerly there had been a banquet. In the opinion of Eugenia Sheppard, women’s features editor of the New York Herald Tribune in the 1960s, Dietrich’s double-breasted sports jacket worn in the film over a white dress was an outdoor costume that “marked the beginning of today’s good taste.” Such details brought her closer to the audiences than von Sternberg would ever have thought desirable.