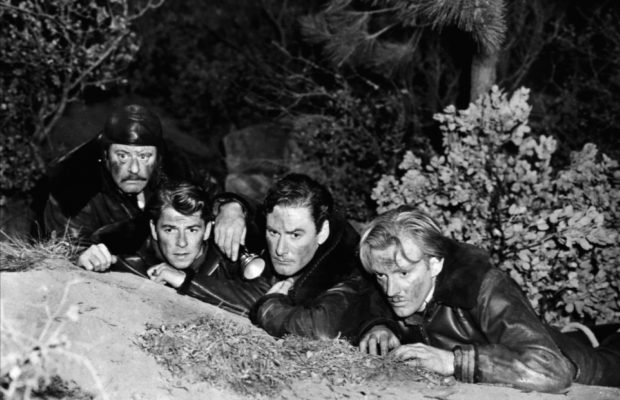 The USA’s entry into World War II found Warner Brothers (and all other Hollywood studios) geared for action and more than eager to exhort the American public to patriotic zeal and an unswerving determination to achieve victory.  During the next four years hundreds of films were produced detailing the conflict on land, sea, and in the air.  These wartime films had an immediacy, an urgency about them, particularly noticeable in tonight’s film.

Of all Hollywood studios, Warner Bros. had the “style” which best suited the action war film.  Since the early 30’s the Burbank studio had released hundreds of films characterized by fast pacing, superb high-key black and white photography, stirring musical scores and stories never short on action, such as Bullets or Ballots, San Quentin, Angels With Dirty Faces, Captain Blood and The Roaring Twenties.

Desperate Journey makes ample use of the technical resources of Warners and of the abilities of Raoul Walsh, a very competent action director.  He and Flynn worked well together in films such as They Died With Their Boots On and Gentleman Jim, and were close friends.  The film tells the story of the crew of an RAF bomber shot down after a raid over Germany, and their attempts to get back to England.  Flynn is at his breeziest as a reckless Australian flyer; Ronald Reagan (the man who would be President) as an American; Arthur Kennedy as a Canadian; Alan Hale a his usual boisterous self.  Toronto’s Raymond Massey plays a German Major with scenery-chewing relish.  Hairbreadth escapes, surprise plot twists and nerve-wracking tension are superbly accentuated by Max Steiner’s magnificent score.  At not time does the story falter.

Flynn has presence as the main character, although a hint of hesitation seems to show in his acting.  In contrast Reagan, with his radio-trained voice is steady and self assured.  The film is well photographed and edited.  The montage scene of the bomber taking off is a masterpiece.

In recent years writers have attempted to discredit wartime films as crude, racist propaganda. These people can have no grasp of the context in which these films were made.  The democracies were locked in mortal combat with a tough and ruthless enemy who would have destroyed our civilization had we lost the war.  World War II films did not glorify war as such, rather they showed brave men and women fighting and dying for something they believed in–freedom.  Let’s enjoy Desperate Journey for what it is–a skillfully made, exciting film.  As the lights go down and the curtains rise, we’re in for a thrilling evening.