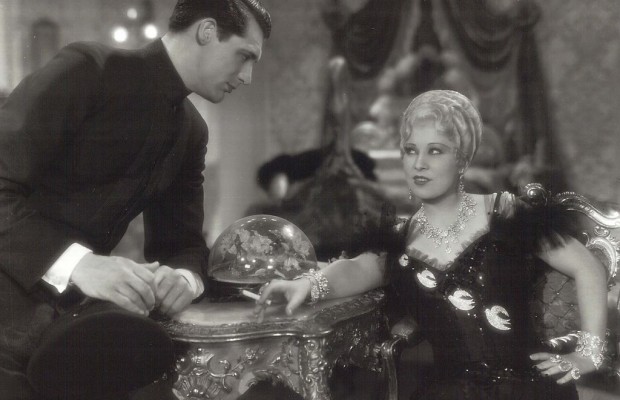 Toronto Film Society presented She Done Him Wrong on Sunday, May 12, 2013 as part of Season 66 May Festival: The Pre-Code Weekend.

Who’s afraid of the big bad censors?  Not Mae West.  “If you can’t go straight; then you’ve got to go around,” she says.  And bingo, how double meanings flash from that.

In Jill Watt’s book on Mae West she says:  In late April 1933, while She Done Him Wrong was still fresh in the theatres, Paramount purchased, at Mae’s insistence, her next film.  Eyeing West’s profitability, Paramount hoped to begin shooting before the end of June, but there was one big problem.  This time, Will Hays intended to monitor Mae West most carefully.  While her fan following

was still growing, there were those who did not love Mae.  Daily reports revealed a growing split between average filmgoers, who strongly supported her, and self-appointed movie reformers, who found her work distasteful and dangerous.  Of more concern were charges levelled by Catholic leaders who actively pressed for stricter film regulation.  In February 1933, Father Daniel Lord, the co-author of the 1930 Production Code, sent Hays a stinging letter, branding She Done Him Wrong as “that filthy Diamond Lil slipping by under a new name.”  Diamond Lil was Mae’s play that She Done Him Wrong was based on.  He warned that Catholics, tiring of Hays’s permissiveness, would demand either political or ecclesiastical oversight of Hollywood films.  While by some estimates an average of 60,000 Americans filled theatres weekly for She Done Him Wrong, several states excised portions of the film, more evidence to Catholic leaders and other censorship advocates of the indecent nature of West’s work.

West’s role in the evolution of movie censorship was and continues to be widely debated.  Many have attributed film censorship directly to Mae West and her movies.  In many ways, it appeared a logical extension of her bawdy stage career, and a direct correlation did appear to exist between the advent of the cinematic Mae West and the tightening of film censorship.  Others have pointed out that she arrived on the silver screen just as calls for movie “purity” escalated.  Certainly, the attempt to regulate films long predated West’s arrival in Hollywood.  Both before and after her debut, the Hays Office scrutinized numerous films deemed offensive and dangerous.  At the same time, West’s overwhelming popularity made her a visible target.  But she was more than symbolic; her controversial screen presence became a major impetus that accelerated a process already set into motion.

And with that I think it’s fitting to end the pre-Code weekend with Mae, and Lowell Sherman’s third film.

Only one previous picture part—a small one in ‘Night After Night’—and now Mae West is starring!  It looks as though Paramount brought Miss West along too fast.  In New York she rates the billing but elsewhere, where they may not know Mae from Joan of Arc, the name over the title of this picture probably won’t attract much attention the first time.  Besides, there’s not a box office moniker in the rest of the cast.

Only alternative to a strong drawing cast nowadays if a picture wants business, is strong entertainment.  This one has neither.

Folks in the sticks seeing Mae West for the first time in this flicker, without having heard of or about her before, are likely to inquire as to what reform school Mae was brought up in.  They may not know it, but they’ll be seeing Mae in ‘Diamond Lil.’  Nothing much changed except the title, but don’t tell that to Will Hays.

Atmospherically, ‘She Done Him Wrong’ is interesting since it takes the customers back to the ‘90’s and inside a Bowery free-and-easy, but mostly following a few highlights in the career of Diamond Lou, nee Lil.  Its story is pretty feeble and stories are pretty important in pictures because personality is less of a factor on celluloid than in person in the talkers it seems.

With the material Lowell Sherman, director this time instead of actor, turned in a commendable job.  He tackled the script with a tongue-in-cheek attitude that takes nothing too seriously, and he restrained Miss West from going too far, something Mae has never been able to do on her own.

A Bowery street set and a heavy interior of ‘Gus Jordan’s joint’ are exceptionally good in appearance, and probably won’t get many arguments about accuracy or lack of it.  But the nifty looking chorus gals in the Bowery joint’s show don’t seem to fit the location.

Mae West in pictures should stand out just as she did in legit—as a distinct personality.  There’s no one just like her and she can be built up to mean something for film box offices.  But she needs extreme care in the literary department.  Also some nursing.  This premature shove to the foreground could retard her progress.  Obviously due to studio hunger for a new attraction, with Miss West expected to attract before she is known.  If not rushed she should be able to build all by herself.

Mae West is to be seen at the Paramount in a hearty and blustering cinematic cartoon of the devilish ‘90s.  With the haughty strut and the nasal twang which are the principal assets of her repertoire, she filled the screen with gaudy humour.  Illustrating the troubled career of Lady Lou, whose heart is bigger than her sense of decorum, she rhymed “amateur” and “connoisseur” in one of her beer-hall

ballads and, on the whole, gave a remarkably suspicious impersonation of Diamond Lil.  In fact, “She Done Him Wrong,” with a few discreet cuts and alterations, is the same “Diamond Lil” without which no bibliography of Miss West’s literary works would be complete.

Most highly prized of the Bowery belles, Lady Lou is notable both for her beauty, which is ornate, and for her wit, which is not dull.  Although her reputation is nightly torn to bits by the pious in the mission next door to the saloon where she holds court, district leaders and other local Napoleons fight for her favours.  Despite the title, she did nobody wrong.  While her man is doing a “rap” she has to live, and she has chosen a good location.  “My career is diamonds,” she says, and men fight for the privilege of adding to her collection of jewellery.

It is Lady Lou’s sentimental nature that brings her down.  The girl she saves from suicide is sold into white slavery.  Russian Rosie, whom she tries to befriend, turns up with counterfeit money.  The man for whom she makes an unprecedented purchase of a soul-saving institution flashes a Federal agent’s badge on her.  Even Chick Clark, who should have known Lady Lou better than that, escapes from prison for the specific purpose of questioning her fidelity.  In the finale Lou is serenely singing “Frankie and Johnnie,” while her indignant admirers are converging on her from various parts of the compass.