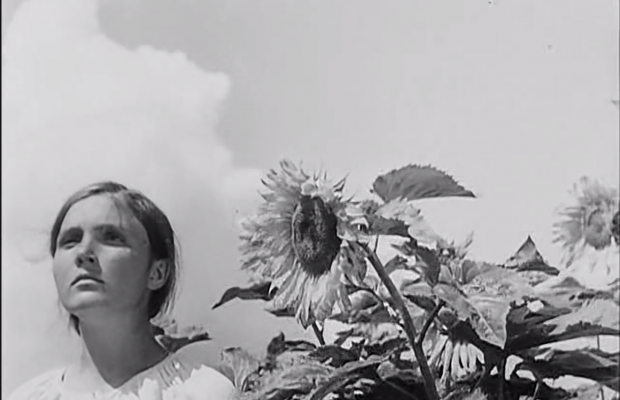 A programme of special interest to film
students.  The feature film Earth must
be run at this time before its lease
expires and the print is returned to
the British Film Institute.

Four in the Afternoon is based on four poems by James Broughton, published in is collection, MUSICAL CHAIRS.  “The primary intention was to create a fresh form of cinematic poetry blending image, music, and spoken verse in an expressive counterpoint…  Illustration of the poems was never intended, for the verses are used as another dimension…  The method of this film may be called choreographic, in the broadest sense…  Most serious experimental films have been concerned with the film-maker’s private night world.  But in Four in the Afternoon we have daydreams, not nightmares.  Thus, each section is a different form of romantic idealization of the wish for love–which is the most common content of anyone’s daydream.”  (James Broughton)

The Gardener’s Son is an adolescent daydream; Princess Printemps is an ironic pastoral.

The film interprets the famous poem, Le Bateau Ivre (The Drunken Boat) by Arthur Rimaud who died at the age of 36 and whose life was particularly tormented.  It is in 2 parts; the prologue shows the paces where Rimbaud spent his youth at Charleville in Belgium where he wrote his most important works.  The drunken boat is the image of the poet himself who breaks all the links of tradition.  It is seen going down the river to the ocean where, met by the storms of life, it sinks.

The director of Passion of Joan of Arc and Day of Wrath designed this traffic problem film on motor cycle safety; his approach is, as one might expect, unorthodox.  The film is based on the “myth” by the Danish poet, Johannes V. Jensen, Nobel Prize Winner for 1944. The U.S.S.R. was the first country in which the propaganda value of the cinema was realised, and the great Russian films of the close of the silent era–The End of St. Petersburg (Pudovkin), The General Line (Eisenstein), Earth–were commissioned for propaganda purposes.

Dovzhenko, born in the Ukraine in 1894 was the son of peasants.  Trained as teacher and painter, he renounced painting for films in 1926.  He wrote in 1930: “I have made three feature films: Zvenigora, Arsenal, Earth.  In the last I wished to show the state of an Ukrainian village in 1929, that is, at a period not only of economic transformation, but also of mental transformation of the whole people.  For these three films I assembled social documentation.  At times the documentation of my films is concentrated to an ultimate degree; at the same time I project it through a prism of the emotions, which gives it life and sometimes eloquence.  I cannot remain indifferent to documents.  One must love much and strongly, and hate–otherwise one’s works would remain dogmatic and dry.”

In 1936 he wrote: “Looking back over my apprenticeship to the film medium, I can see that I have made my share of mistakes…  I was often wrong–apparently the result of the difficulties of assimilating a new art without sufficient technical knowledge and background…  Cinematic art is simply boundless; there is so much to know.  In Earth I forced myself to simplify my cinematic language, and I hope I succeeded.”  Dovzhenko’s previous film, Arsenal was an excited experiment containing as he said “enough material for five or six films”; it pretended to no unity and employed a wide variety of methods.

The story of Earth is simple and tells, after a slow, lyrical prologue of the fierce opposition of the Russian Kulaks to collective farms.  Its theme is the same as Eisenstein’s General Line, but there the similarities end: where Eisenstein’s film makes intellectual propaganda and moves dynamically with technical fireworks, Dovzhenko’s is poetic in approach, deliberately slow and static, more concerned with the universalities of life–“old me die, in the fullness of time, as the apples ripen on the trees; young are bon and life is renewed.”

Earth confounds the text-book theories of what constitutes good and bad cinema.  Its only element of virtuosity is its imaginative power.  It is vague, disjointed, extremely slow.  “Without words, with very little camera-movement, with nothing of the quick eye for detail and subtle switching of emphasis that we like to pick out to-day, the whole burden of the film is on each image…but Earth is not a succession of striking shots, it is the communication in great intensity of a personal vision.  The film is heroic and idealistic in mood, and the mood is expressed through massive self-contained images…  The concentration makes of Earth, a poem.”  (Gavin Lambert)

There are sequences in the film which are strange and haunting; an extraordinary one is the formalised scene at evening, where lovers sit in the fields watching the sunset, the peaceful animals, the quiet land; Dovzhenko reveals this in a series of statuesque groups.

Or Dovzhenko’s silent films, only Arsenal has been available until this Season when Earth was leased from England.  It is being shown with success to Film Study Groups within Societies; the general membership would not be happy about it, as we have proven at the University of Toronto Exhibition Meeting this Season.  The Ottawa Film Study Group said this about Earth, after setting a music score to it: – “Saw this film three times before starting to fit music to it.  It seemed devoid of much action, except in broad lines, but nevertheless was fascinating throughout.  Why?  How could a whole reel (12 or 15 minutes) be devoted to an old man dying very very slowly, and yet sustain interest all the way?  It became quite obvious that whatever validity the film possessed was in the slow unravelling of its many moods.  The atmosphere created by this extraordinary film was filled with emotion and power to whoever was willing to view it with a tolerant eye.”

Technical Note:  The copy of the film is from a dupe negative; there has been a certain loss in the photographic quality for which the film in its original form was so highly praised.  Some breaks in the continuity are the result of censorship cuts.  Thorold Dickinson points out that in Dovzhenko’s original, the tractor’s radiator boiled over and was replenished with the urine of its enthusiastic purchasers, but this episode was removed by the Soviet censors!  Cuts were made in at least two other places: one is the scene in which the lover of Vasily, hearing of his death, tears off her clothes in the vehemence of her grief, and another the scene of the woman in labour, during the funeral.  For the rest, such discontinuity as there may be is inherent in the construction.

There will be a music score accompanying the film from phonograph records; the speed at which the film will be projected will be announced–(a controversy is raging among societies as to which is best in the main: 18 or 24 f.p.s.!)