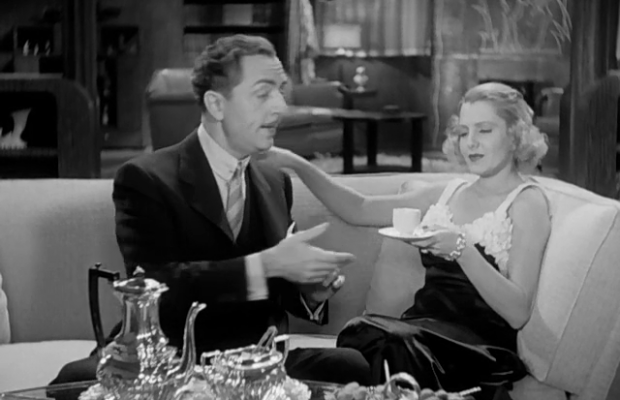 Toronto Film Society presented The Ex-Mrs. Bradford (1932) on Monday, July 11, 2016 in a double bill with Trouble in Paradise as part of the Season 69 Summer Series, Programme 1.

Great cast and interesting premise.  For me, what was wrong with this film was that it was made after the Production Code was implemented.  There’s always the niggling feeling that the story-line would have been a lot smoother if we didn’t have to worry so much about the fact that the two detectives, Mr. and Mrs. Bradford, were no longer wed.  But you can judge for yourself.  Certainly the essay written below doesn’t agree.

However, on second viewing on the big screen with an audience, I thoroughly enjoyed the story and was able to follow the somewhat convoluted plot.

This was director, Stephen Roberts, last film.  He started out in 1923 at the age of 28 making shorts until he was given his first full-length picture, SKY BRIDE in 1932.  He directed the famous and rather startling pre-Code THE STORY OF TEMPLE DRAKE, incidentally starring Miriam Hopkins from tonight’s earlier film.  Interestingly for me, he also directed STAR OF MIDNIGHT, which you may recall TFS showed two seasons ago in the Fall/Winter series, and which I find has many similarities in style with tonight’s film.  He only directed a dozen full-length feature films when he died at the age of 40 of a heart attack two months after this film’s release.

When the film opened in England, author Graham Greene wrote appreciatively about it.  He made the point though that while the details of the murders and their solution might be less than convincing, he thought that such films as these American crime stories had a strong sense of reality compared to its British counterparts.

The critical consensus approved of the film, with the New York Times lauding Jean Arthur as “an amusing little clown who manages to be Mr. Powell’s best friend and severest handicap without ever quite convincing us that she is just a nitwit.”

Some entertaining dialogue in the film by screenplay writer Anthony Veiller:

Prominent surgeon William Powell blames the break-up of his marriage to Jean Arthur on her career as a mystery writer, saying: “I spent more time at the morgue than at my office.  You and your mysteries were making a wreck out of me.”  And maybe a bit hurtful but funny, “I need you as much as I need a giraffe.”

Keep your eyes peeled for silent-film comic Al St. John, in a small, uncredited role as a morgue attendant.  St. John performed in well over 300 films and shorts and was the nephew of the great comedian Roscoe “Fatty” Arbuckle.

Powell went through one of his periodic loanouts—this time again to RKO—for The Ex-Mrs. Bradford, in which he found himself cast with the delightful Jean Arthur, who was herself on loan from Columbia.  Powell had fond memories of Arthur when she played with him in his early talkies, and the reunion was a happy one, all the more so because they knew they had a good script on hand, a director (Stephen Roberts) who understood the material, and some sterling supporting players, including Robert Armstrong, Ralph Morgan, Lila Lee and Grant Mitchell.

Powell had it in his MGM contract that he could not be loaned out without his okay, but he liked the script of The Ex-Mrs. Bradford and felt instinctively that it would be a hit that would enhance his bargaining power as a Metro-Goldwyn-Mayer star.  His instinct was right, as the picture was well liked by critics and public.

The story involves a famous surgeon (Powell) whose ex-wife, Arthur, is constantly devising schemes to win him back.  It seems that crime detection is the ex-Mrs. Bradford’s hobby, and soon she involves Powell as chief suspect (in the mind of police inspector James Gleason) in a race track murder.  Whereupon surgeon Powell turns sleuth and sets out to clear his name by solving the murders on his own, with Arthur making a nuisance of herself by offering tips, and second-guessing the investigators on hand.

One critic wrote: “It’s fearfully familiar ground, this man-woman sparring while a murder is being solved, and one would think there would be a danger of Mr. William Powell wearing out the genre.  After all, how many twists and turns can one give such situations?  But to our surprise, this gifted actor, ably abetted by the delightful Jean Arthur, makes it all seem fresh and novel.  We went to the screening with misgivings; we are glad to be proven wrong.”

The Complete Films of William Powell by Lawrence J. Quirk (1986)