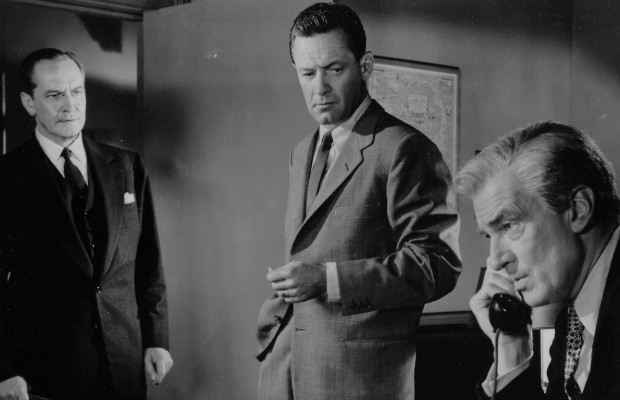 The executive president of a great company drops dead on the street, at first unidentified because a thief immediately steals his wallet, but observed from a high window by a businessman who can make money out of concealing his death.  Stocks plummet, and then the vice-presidents vie, with all the clawing methods of big business, for the vacant chair.  And that is about all there is to the plot of Robert Wise’s Executive Suite, which derives its interest from the richness of the stereotypes: Holden as the young idealistic exec with the magazine-story marriage, Stanwyck as the dead man’s mistress, Roch as the faithful secretary, March as the conniving heir presumptive, Pidgeon as the perpetual bridesmaid, never the bride, Douglas as the philandering roughneck–in short, a good deal of type-casting which manages to cohere into a blockbuster film (based on a blockbuster novel) about what really goes on in the boardroom.

Executive Suitewas on the crest of a wave of interest in big business during the Eisenhower years, which in short order produced Woman’s World, Patterns (via television), The Power and the Prize, and The Man in the Gray Flannel Suit.  This was not long after Charley Wilson, Secretary-designate of the Treasury, had expressed the view that what was good for General Motors was good for the USA, a remark taken on to immortality by General Bulmoose in “Li’l Abner”.  This equation of the interests of big business with those of the nation is in marked contrast to the attitude of the depression years, as represented, say, in the films of Frank Capra.  In Executive Suite it does invite a political analogy in these McCarthy years, with March, the ambitious vice-president, a combination of McCarthy himself and Vice-President Nixon (whom Adlai Stevenson that year called “McCarthy in a white collar”) (Bosley Crowther in the New York Times, perhaps disingenuously, said that the picture “does catch some graphic glimpses of the genus Vice President in his lair”).  But more important than precise equivalences is the recognition that in the dull political years of the mid-fifties, with the excitement of McCarthyism on the wane, and with laissez-faire, business-oriented leadership in the White House, the nation was deriving more enjoyment from watching the real thing–the skills and techniques of the party convention transferred to the executive suite.  And, to preserve the political analogy: if March fits our retrospective view of Richard Nixon, the candidate who is finally successful is much more an incarnation of Nixon as he was seen, especially by Republican businessmen, in the world of thirty years ago.

It is a question whether the subject matter of Executive Suite suits the true métier of its director.  Robert Wise had helped to edit both Citizen Kane and The Magnificent Ambersons, and so had the feel of a “big” picture, but had soon after moved to the direction of horror films (The Curse of the Cat People, (1944); The Body Snatcher, (1945), before making a classic of science fiction, The Day the Earth Stood Still (1951).  He returned to the first genre with The Haunting (1963), and to the second in 1970 with The Andromeda Strain, but by then he had won two Academy Awards for two big, nay enormous, musicals, West Side Story (1961), and The Sound of Music (1965).  Wise might be called an American David Lean, less pompous, just as varied, and with an occasionally fine grasp of close human relationships (such as one gets in Lean’s war films and his Dickens adaptations, and overwhelmingly–beyond Wise’s powers–in Brief Encounter).  Andrew Sarris, on the other hand, maintains that “the stylistic signature of Robert Wise is indistinct to the point of invisibility,” and it may be that the true auteur of Executive Suite is that very strong producer, John Houseman, who supervised two other notable studies of corporate power, The Bad and the Beautiful (1952) and Two Weeks in Another Town (1962).

Executive Suite was among the top-grossing films of 1953-54.  Though it did not figure amongst the Academy Awards (this was the year of On the Waterfront and The Country Girl), it was placed fifth in the National Board of Review awards and eighth in the influential Film Daily poll.  Bosley Crowther did not like it, and it has not on the whole worn well.  Perhaps its most perceptive contemporary review was Penelope Houston’s in Sight and Sound, and this may be allowed to stand.  Noting that there was “more film convention than real life” in the film, she went on: “The character of the financial expert is, ultimately, only a variation on the familiar figure of the corrupt politician or the corrupt newspaper editor; the harangue on business morality which wins the day for Holden appears only a degree less naïve than most similar Hollywood exhortations.  The framework, as so often happens, has been constructed with a firmness and validity lacking in the central human situation.”